The Owls Fly In!

Share All sharing options for: The Owls Fly In! 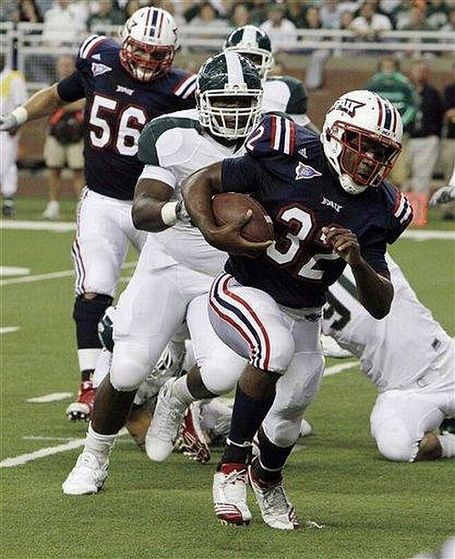 War Eagle, everybody! It's time now for another Auburn opponent preview for the 2011 football season. This week, we'll look at the Florida Atlantic Owls, who'll visit Jordan Hare Stadium on September 24th. The last time Auburn played a Howard Schnellenberger-coached team was in August of 1984, when the Tigers took on the defending national champion Miami Hurricanes in the Kickoff Classic II, at Giants Stadium in New Jersey. Miami escaped with a 20-18 win. While coach Schnellenberger built Miami into a national title contender, he's had a decidedly more difficult challenge at Florida Atlantic, producing only a 56-60 record with the Owls. You see, prior to Schnellenbeger's arrival in 1999, Florida Atlantic had no football program at all! 11 short years later, they are playing FBS football, and will play their home games in a brand new 30,000 seat stadium in Boca Raton. The program has made amazing progress!

After three straight early games in the broiling September sun, I think most Tiger fans are hoping that this will be a night game. The Tigers will need a bit of a break to recharge for a grueling mid-season stretch of games. Auburn will have hosted Utah State and Mississippi State, then survived a road trip to Clemson. Florida Atlantic opens with 4 consecutive road games. The Owls play at Florida, then at Michigan State. They then have a week off to prepare for Auburn. FAU has upset AQ teams in the past, but they are coming off a difficult year in which they only finished 4-8.

Offensively, the Owls have some building to do before September. The must replace solid quarterback Jeff van Camp and most of their receiving corps. All five offensive line starters return, as well as workhorse running back Alfred Morris. Morris led the Sun Belt with 928 rushing yards last season, but the team only averaged 2.8 yards per carry and only scored 8 rushing touchdowns in 12 games. The biggest challenge is finding a quarterback. The returning three quarterbacks only threw 7 passes last season. The expected starter, junior Graham Wilbert injured a finger on his throwing hand and has missed time during offseason workouts. Coach Schnellenberger has indicated that it will be a 3 quarterback race in fall camp.

Florida Atlantic returns a strong leg in senior punter Mickey Groody but must replace a consistent kicker Ross Gornall. Groody averaged 45.7 yards per punt and at times showed great placement skills. Junior Vinny Zaccario is the new kicker. Owl kick and punt coverage are average at best, and the team could use some help in the return game. The kick return group managed only a 19.9 yard average, and the punt returners averaged only 6.5. Both return men, Tavious Polo and Willie Floyd will have to be replaced.

Florida Atlantic could not stop the run last season, giving up 4.6 yards per carry and 203.6 yards per game. To shore up the problems, the Owls are switching to the 3-4 defense, and defensive coordinator Kurt VanValkenburgh is looking for more better tackling this season. The reason for the move is that FAU has more athletic linebackers than linemen. Often, teams struggle in their first year of a new system.

Auburn defensive line vs. FAU offensive line: Auburn's fast, disruptive ends Nosa Eguae, Dee Ford and Corey Lemonier will be a problem for the Owls to handle. While there's a pretty fair amount of experience returning on the FAU line, this group was a mash unit last fall. The Owls managed only 94.2 yards per game rushing, and they gave up 36 sacks. The coaches have more bodies to work with this year starting out, but keeping them healthy against a brutal opening schedule is going to be tough. Projected FAU starters from left to right are expected to be Samuel McRoy, Andy Czuprynski, Jordan Sessa, Chris Newbold and Max Karrick. Big advantage: Auburn.

Auburn linebackers vs. FAU backs: FAU runs into a buzz-saw, here. While Auburn's new starting linebackers may show some confusion about where to line up, this is a fast, physical unit with experience. Eltoro Freeman, Jonathan Evans and Jake Holland are all proven run stoppers, and Darren Bates (the only returning starter) has great speed and has added muscle during the offseason. The Owls return their leading rusher, Alfred Morris, a 220 pound senior who packs a punch. Sophomore backs Damian Fortner and Travis Jones are of a similar style. The Owls do not have serious break-away speed at the position. Big advantage: Auburn.

Auburn corners vs. FAU receivers: Veteran T'Sharvan Bell and younger guys Chris Davis, Jonathan Rose and Jonathan Mincy all had great springs at corner. This is a unit with speed and physicality to burn. The Owls will likely use sophomore DeAndre Richardson, redshirt freshman Marcus Cunningham and junior Paul Moore. All of these guys have decent speed, but are on the light side. Richardson is the heaviest at 180 pounds. Richardson had 12 catches for 114 yards last year, the other guys had none. Advantage: Auburn.

Auburn safeties vs. FAU secondary receivers and quarterback: Auburn fields two new starters at safety this season, but both are experienced and athletic. Neiko Thorpe and Demetruce McNeal will bring a physical style of play and good speed to the safety position. FAU's premier secondary receiver last season was tight end Rob Housler, who caught 39 balls. He'll be replaced by senior Darian Williams, who caught 9 balls for 110 yards last season. FAU is still trying to decide on a quarterback. Junior Graham Wilbert was 1 of 5 passing with one interception last season. He's been slowed by a finger injury this spring. Junior David Kooi was 0 for 2. Redshirt freshman Nick Bracewell will get a look this fall. By all preliminary indications, the Owls will have a tough time attacking Thorpe and McNeal. Advantage: Auburn.

Punting: Auburn will field sophomore Steven Clark, who had a several shaky starts last fall. If the A-Day game is any indication, Clark will boast a much stronger leg this fall. There are no such doubts about senior Owl punter Mickey Groody. He can hammer the ball, as his 45.7 yard average last season indicates. Groody also pinned 16 punts inside the opponents' 20 yard lines. Where there might be an issue is in the Owl protection. They had three punts blocked last season. Both teams are unsettled at the return spots. Neither shone last season. Auburn allowed 4.5 yards per return, and FAU allowed 9.4. Despite the presence of Groody and Auburn's uncertainties, the blocks and that coverage number are concerning for the Owls. Advantage: Even.

Kickoffs: Auburn sophomore Cody Parkey was used about a third of the time last season, and he averaged 63.2 yards per kickoff. Auburn was second in the SEC last season in kick coverage, helped by a nasty coverage team. Junior Vinny Zaccario will be a new starter for the Owls. Auburn gave up 19.7 yards per return while FAU gave up 22.6. Auburn has veteran return man Onterio McCalebb back, and he averaged 28.4 yards per return in 2010. FAU is still mulling options for returns. Advantage: Auburn.

Place kicking: Sophomore Cody Parkey takes over as the Auburn kicker. His only college experience is a couple of extra points kicked late in the Homecoming game. Parkey is said to have had a good spring. Parkey's backup Chandler Brooks hit three field goals longer than 40 yards in Auburn's A-Day Game. Vinny Zaccario did not have a kick last season. Advantage: Even. Too many unknowns.

Auburn offensive line vs. FAU defensive line: Auburn fields a rebuilt line this season with 3 entirely new guys inside, John Sullen, Blake Burgess and Jared Cooper. Only Sullen has extensive playing time with games on the line. The Tigers do return two tackles with starts, seniors Brandon Mosley and A. J. Greene. To successfully run a 3-4 defense, a coach must have three good-sized linemen up front that can demand double team blocks. FAU lists as starters: senior Kevin Cyrille (275 pounds), junior Jimmy Jean (290 pounds), and sophomore Andrew Stryffeler (245 pounds). Cyrille posted 32 tackles last season, with 6.5 for a loss. Jean had 20 tackles, with only 1 for a loss. Stryffeler had 6 tackles. Advantage: Auburn.

Auburn backs vs. FAU linebackers: The Auburn Tigers return the one-two punch of freshman All-American Michael Dyer and Onterrio McCalebb at running back, and will look to the incoming signing class to fill out the depth chart. Linebacker are the strength of the Owl defense, led by sophomore Randell Johnson, who posted 41 tackles a year ago despite a back injury. He appears to be fully healed. Rounding out the starting lineup are sophomore Corey Henry (27 tackles), Junior Yourhighness Morgan (47 tackles) and junior David Hinds (24 tackles). These guys will have to flow to the point of attack and deal with Auburn's angled blocking schemes. Advantage: Auburn.

Auburn receivers vs. FAU corners: Auburn will rely heavily on returning veteran Emory Blake, and intriguing prospects DeAngelo Benton and Quindarius Carr. Senior Marcus Bartels started every game last season, and had 2 picks and 7 pass breakups, as well as 5 sacks off the corner blitz. Sophomore Treon Howard moves into the other starting position. With one start last season, Howard had no passes defended. FAU held opponents to 7.3 yards per pass and 197.8 passing yards per game last season, but that number is deceiving, as most teams were able to run at will on the Owls. The Blake/Bartels matchup will be interesting. Other than Blake, the Auburn receivers haven't proved much. Advantage: Even.

Auburn secondary receivers and quarterback vs. FAU safeties: Auburn's most notable returning secondary receiver is tight end/h-back Phillip Lutzenkirchen, who was a clutch go-to guy last year. About half of his catches resulted in touchdowns. The Tigers also have options from the speedy Trovon Reed to the 290 pound H-Back LaDarius Phillips. Auburn is still in the midst of a quarterback race, but junior Barrett Trotter seems to have the upper hand at this point. Regardless of whether Trotter or sophomore Clint Moseley start, Auburn will field a quarterback with three year's worth of experience practicing the Gus Malzhan offensive system. The Owls' projected starters, sophomore Keith Reaser and junior Demetrius Williamson had a grand total of three starts between them. It's going to be tough for 3 new starters in the secondary to cover all of Auburn's options in the passing game, AND provide run support. Advantage: Auburn.

Florida Atlantic will bring a team that will fight Auburn in the trenches, but they seem to lack the playmakers that BCS schools typically have. In addition, they are breaking in a new quarterback and a new defensive scheme. Auburn must guard against a letdown. The worst thing that could happen is that the Owls scratch and claw, and stay in the game, forcing the Tigers to bludgeon their way to victory late.

Expect the Tigers to use this game as a tune up to a vicious stretch of games coming up: at South Carolina, at Arkansas, home against Florida, and at LSU in consecutive weeks. I'd expect Auburn to try to score early and often, take the Owls out of the game, then play a lot of reserves.

Prediction: Coach Schnellenberger does not have the weapons to invade an SEC stadium and pull the upset. Auburn cruises to a 55-10 win.