Share All sharing options for: Friday Ramblings - Plus Recruiting(Again) 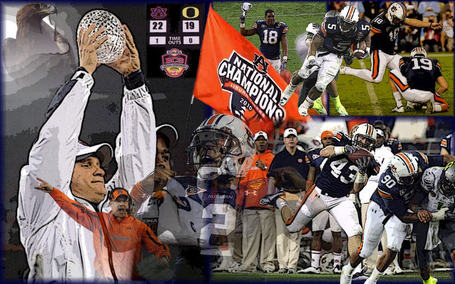 What a way to spend your week. Knowing full well all the breaking stories would be covered by our fine staff of cracker-jack writers, and then having to piece together something pertinent and semi intelligent (that's the best I can do, by the way).

By now you all know that Auburn's compliance director Rich McGlynn has filed a waiver on behalf of Mike Blakely, the running back who transferred in from the Florida football program. Mr. McGlynn believes strongly that the NCAA will rule within a few days, and since Blakely never even so much as practiced with the Gator football team, Auburn should get the expected waiver granted in their favor.

Speaking to the Mobile, AL Auburn Club McGlynn stated that "we are all one decision away from being stupid". This writer knows that all the incoming class at Auburn this year are aware of the consequences, of those "stupid" decisions. In an interview with rivals.com four members of Auburn's incoming signing class, there were several remarks by these young men that indicate an added emphasis on doing the right things on and off the field, is part of the early summer discussions.

Also in the director's speech was an amusing story of Nick Fairley looking at McGlynn when the Tigers were down 24-0, and smiling, then saying, "I got this". Also, that Auburn decided to take the approach of "winning the war, not individual battles" in dealing with the Cam Newton saga. He flat out stated with confidence "We knew we were right, but couldn't talk about it. Had he thought Newton was anything less than eligible, there would have been no Newton".

This years recruiting should be as exciting as any ever at Auburn. Typically the year after a school wins a Mythical National Championship(MNC) they bring in their highest rated classes. So, far that is exactly what this class is shaping up to be. I'll post the names of those already verbally committed.

Auburn's recruiting is on a national basis now with Head Coach Gene Chizik, and his incredible staff of recruiters. Taking full advantage of several momentum swings occurring at about the same time, like UGA's downturn, the entire Urban Meyer retiring, and then returning fiasco. Florida and Georgia are two states that are talent rich, and covered nationally by all the top recruiting reporting services. Auburn was bound to make waves in these areas, and took full advantage of these openings. Of course, winning the BCS didn't hurt at all, and has Auburn on all the top recruits radar. A trend that, I for one, am very happy to see.