Time For Chizik to Stop Turning the Other Cheek

Share All sharing options for: Time For Chizik to Stop Turning the Other Cheek 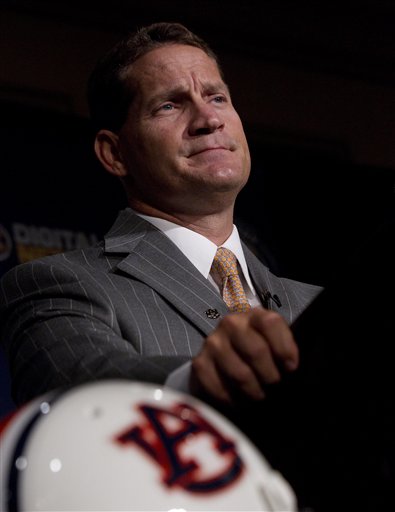 No more inner reflection. Give em hell, stand up and yell.

After witnessing the onslaught in Birmingham last week, with the lack of fizz predicted this year for Auburn, I imagine the victory laps taken by Nick Saban, Urban Meyer, and Les Miles during the three preceding SEC Media Days were quite sweet for them, basking in the glory of BCS crystal, getting all the attention as the coach of the defending national champs. I imagine a lot of soft balls were thrown their way as questions by the media as they swooned and fawned over these conquering coaches, sitting atop their not-so-hot seats, contemplating just how merciless their next squad would be on the SEC and the country. Yes, it must have been something to behold to have been in their shoes.

But a funny thing happened to all of them on the way to the BCS repeat. In spite of two coming back the following year ranked #1 in the pre-season AP poll, and none ranked worse than 7th, these records happened:  2007 Florida 9-4;  2008 LSU 8-5;  2009 Florida 13-1;  2010 Alabama 10-3. All of them save the '09 Gators were abject failure measured by most of their fan bases compared to the success tasted one year prior. None of them won the conference. Only one came back to defend the conference crown. And none repeated with a national crown. With only one in four coming close to even challenging following a MNC season, you have to ask yourself exactly how much faith you really put in these polls.

I'm not going to tell you that Auburn got disrespected last week. The media and the fans are entitled to their opinion. You can decide that for yourself. But when you get hamstrung from the very beginning by jackwagons like Danny Sheridan and whoever leaked the Chizik-NCAA investigator conversation,  that puts you on the defensive immediately and you have no time to bask in the glory because you're too busy catching the spears chucked at you. And they came raining down like Cam Newton TD passes into the Bryant-Denny end zones--something with which no SEC coach the previous four years has had to contend.

Coach Chizik was looking at a hard enough task of explaining to the media how Auburn was going to buck the trend and mount any meaningful defense of their SEC and national titles. Having to undergo Cam-gate once again was just the product of the bitterness that Jay mentioned yesterday, from not only certain Bama fans like Sheridan and his ilk, but from other conference rivals as well. "But the investigation is ongoing", they say, looking for any thread of an excuse to once again reinsert the topic and tarnish our image. No, it's not ongoing, it's just still open, which for the NCAA means that until any new evidence comes to light or their statute of limitations is up. It's only ongoing when the media starts hyping it up once again when another chicken little like Sheridan or Scott Moore starts telling you the Auburn sky is falling.

Look, we can't keep walking on eggshells because of the NCAA bogeyman might be at the door, knocking to take our national championship away. We can't do it as a team, as a school, or as a fanbase. The detractors know they can get to us by stirring the pudding pot. We go scurrying into our prevent defense, ever watchful of the long ball. We are allowing them to use it as a weapon to divide and conquer us. We can not take this anymore. There is no way that Auburn bought Cam Newton. With the exception of a rogue booster unbeknown to the program, there is no way that the school would risk such behavior no matter how high the stakes.

We need to change our tactics to go from being on the defensive to not necessarily being on the offensive, but maybe just on special teams. The administration and the athletic department need to come out loud and clear with a message that unless new damning evidence comes to light, we're simply done discussing the Cam Newton allegations. Period. We need that commitment from the top to give our prime message man the backing he's going to need to begin telling the CFB world "next question please", which I'm pretty sure is journalism speak for go eff yourself.

I believe Gene Chizik is a nice man, but he has one fault. He's a nice man. Ever the positive motivator, Chizik is the caulk that surrounds any conversation or interview with some uplifting message or feel-good tone. He sometimes comes across as sappy to me, and don't get me wrong, I'd have the guy's baby if asked nicely and presented with any lower-bowl seating package. I think others have picked up on that or they've mistaken his up-with-people schtick as some sort of weakness of resolve or lack of stinging retort capability. Chizik needs to put the mean back in Mean Gene and enroll in the John McKay school of sports questions management to learn to quit singing kumbaya with the media.

I'm not sure what degree of respect that head coaches in the highest levels of CFB need or seek from the media or their peers to make it all worthwhile, but it seems to me that Chizik is getting precious little from both, especially those peers within the conference who tattled to the media his exchange with the NCAA back in May. I just hope the behind the lines retribution is swift because I'm pretty sure they know who dropped the dime. I'd like to think that maybe it wasn't a football coach and was possibly a basketball guy since the tattler Phil Fulmer is no longer around, but these days I'm not so sure.

Look, coach Chizik, most of these people are never going to like you. They'll never see the hard work you and your staff have put in. They'll never see the contributions of the rest of a very industrious team that only continues to pile up the talent. They summarize you up in one sentence: You bought the freak Cam Newton. Maybe it's not you but in fact your employer they hate so much, but the association is all the excuse they'll ever need. And if in the process they learn to detest you as a bonus, then so be it. And while it's only basic human nature to try and knock the king off his mountain, these climbers seem to exhibit a particularly nasty zeal for attempting to summit.

I know that turning your other cheek is what you believe to be the way you govern your life as a man, but it's starting to affect the rest of us. We're tired of you giving the pricks the satisfaction of watching you dance. Don't kill them with kindness or soft words. Kill them with the big stick. Toughen your stance. Retort with curt responses. Make pressers as terse as Morse code. Be the southern version of Oregon's Chip Kelly and his Yankee pluck. Don't be an asshole like Urban Meyer would under similar circumstances, nor be as skittish as Les Miles would be. Asked what you think about the returning national champions being picked to finish 5th in their division? Don't just smile and kindly disagree. Ask him if he's lost his mind, or utter a quick no and let the silence kill his moment. In other words, at least turn the press conference into something worthy of a future Coors Lite commercial.

But behind the scenes, thank them for the favor. Auburn thrives when you remove our blip from the radar. The worst thing the media could have done was to pick us once again to contend in 2011. That would be the equivalent of the 2009 squad going up early by two touchdowns--we'd collapse. But with no pressure, we'll play like we have nothing to lose--because the media types already have it figured out. And we'll just play the games out for the heck of it? Hell no. We're playing for keeps. I dare you to short-sell Auburn. See you this fall.