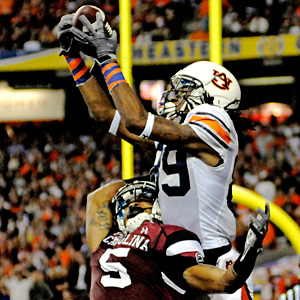 The biggest scuttlebutt to make the rounds is that Auburn's top Wide Receiver the last two years, Darvin Adams may be joining Cam Newton with the Carolina Panthers. In addition, Center Ryan Pugh is rumored to also be headed to Carolina.

Of course, free agents have to be able to make the 53 man team roster and the learning curve has been decidedly shortened by the NFL labor dispute. But Carolina struggled last year in the passing game; so Darvin joining his former quarterback could provide him with the  best possible scenario to make a team this season.

If true, that would give the new players at Carolina an orange and blue hue since offensive tackle Lee Ziemba and Newton already are with the team.

This is certainly good news for Darvin, for Cam, for the Panthers, and for Auburn fans. The only thing better would be if T-Zach could be Cam's other receiver in 2011.