The Tiger Den in Death Valley!

Share All sharing options for: The Tiger Den in Death Valley! 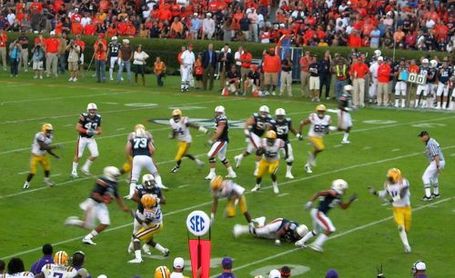 War Eagle, everybody! It's time now for a look at another of Auburn's 2011 opponents. On October 22nd, the Tigers travel to Baton Rouge to take on the LSU Tigers. It's the 4th of 5 tough SEC games in October. Many folks feel that LSU has a shot at SEC and National Titles this season with a talented and deep roster. This will be a tough trip for Auburn.

Auburn's schedule is difficult in 2011, but LSU's road is arguably tougher. Prior to the game with Auburn, LSU plays Oregon in Dallas, Northwestern State, Mississippi State in Starkville, West Virginia in Morgantown, Kentucky, Florida and Tennessee in Knoxville. Auburn will have played Utah State, Mississippi State, Clemson in Clemson, Florida Atlantic, South Carolina in Columbia, Arkansas in Fayetteville, and Florida.

LSU did lose a ton of talented players to graduation and attrition, as well as offensive coordinator Gary Crowton. Steve Kragthorpe was hired to run the offense, and the hope is that the Tigers can generate a more balanced attack this season. A much improved line should help LSU produce a strong ground game from great sophomore running backs Spencer Ware and Michael Ford. Many folks thought Georgia transfer Zach Mettenberger had a shot to win the starting quarterback job this spring, but he remains mired at 3rd team on the depth chart. 5th year senior Jordan Jefferson remains the starter, despite a lackluster spring game.

LSU's defense was tough in 2010, and should be again in 2011 under coordinator Jon Chavis. LSU will miss Drake Nevis in the middle. Three of the top four tackles on the depth chart are underclassmen. It's a problem Auburn shares. LSU has fast, dangerous ends, and an even faster linebacking corps. Junior corner Morris Claiborne appears to be one who can shut down his side of the field.

LSU special teams are starting over after losing the powerful and reliable leg of Josh Jasper, and the returns of Patrick Peterson. LSU should have enough speedy return men to be OK there. Both the punting and kicking jobs appear to have been won by junior Drew Alleman, although senior D. J. Howard handled all punts in the spring game for about a 40 yard average. LSU coverage was decent on kickoffs in 2010, and downright nasty on punt coverage.

Auburn defensive line vs. LSU offensive line: Auburn had apparent problems in the A-Day game at defensive tackle, and LSU has the beefy interior line to exploit it. Auburn true sophomores Jeffery Whitacker and Kenneth Carter will have had half a season to gain experience, however. The Auburn defense is most dangerous at defensive end, led by Nosa Eguae, Dee Ford and Corey Lemonier. LSU fields a talented, massive O-line. Penciled in as starters from left to right are senior Chris Faulk, senior Josh Dworacyzk, junior P. J. Lonergan at center, senior Will Blackwell, and junior Alex Hurst at right tackle. Senior backup T-Bob Herbert can fill in at several positions if needed. Even with a suspect passing game a year ago, LSU was able to grind out 185 yards per game on the ground, and this unit looks to be improved this season. Advantage: LSU.

Auburn corners vs. LSU receivers: Auburn projected starters T'Sharvan Bell and Chris Davis got extensive experience in the two games last season, and Jonathan Mincy and Jonathan Rose looked solid in spring drills. LSU has veteran junior receivers Reuben Randle and Russell Sheppard, as well as depth in sophomores Kardon Boone and James Wright. Auburn was able to stick with these guys plus Terrence Tolliver in last year's game. LSU managed only 128 passing yards, and 39 of that was on a halfback pass. Advantage: Even.

Auburn safeties vs. LSU secondary receivers and quarterback: Auburn will field a new/old tandem this fall at safety: converted corner Neiko Thorpe and sophomore Demetruce McNeal. Thorpe has played a lot of football in the past three years, and by all accounts is making a very successful transition to safety, where he's more suited. McNeal is fast and is a ferocious hitter, but only has spot duty last season on his resume. LSU will likely use the tight end more in the passing game this year, and senior Deangelo Peterson and junior Chase Clement should be capable. The real question in this matchup is the quarterback position. As a 5th year, battle-tested senior, Jordan Jefferson should have his best year. In this year's LSU spring game, Jefferson led one good drive, then was the same old inconsistent talent he's always been. He hit only 4 of 14 passes with one pick and no scores. Jefferson had a tendency to stand in the pocket too long and stare down receivers. Backup Jarrett Lee once again looked better passing, but threw a critical interception on the goal line in the spring game. LSU must get solid quarterback play to be a championship contender. It remains to be seen whether that will happen or not. Advantage: Even.

Punting: Auburn will field sophomore Steven Clark, who had a several shaky starts last fall. If the A-Day game is any indication, Clark will boast a much stronger leg this fall. Senior D. J. Howard looked solid punting the ball this spring for LSU, but most depth charts out there have junior Drew Alleman on top. Alleman has only two pooch punts in his college career. Auburn's still unsettled as to who will return punts, and had fumble problems back there the past two seasons. To replace Patrick Peterson, LSU narrowed their search down to sophomore Tyrann Mathieu and junior Reuben Randle. Both Auburn and LSU were good covering punts last season, Auburn gave up 4.5 yards per return, and LSU gave up 4.9. Base on just a bit more experience, it's Slight Advantage: Auburn.

Kickoffs: Auburn sophomore Cody Parkey was used about a third of the time last season, and he averaged 63.2 yards per kickoff. Auburn was second in the SEC last season in kick coverage, helped by a nasty coverage team. Junior Drew Alleman kicked off 7 times last season, for a 63.4 yard average. Auburn's Onterio McCalebb figures to be the primary kick returner. McCalebb averaged 28.4 yards per return in 2010. LSU must replace Patrick Peterson, and leading candidates are junior Morris Claiborne and senior Ron Brooks. That duo combined for 9 kick returns for a 24.3 yard average last year. Auburn coverage gave up 19.7 yards per return, LSU gave up 21.2. Advantage: Auburn.

Place kicking: Sophomore Cody Parkey takes over as the Auburn kicker. His only college experience is a couple of extra points kicked late in the Homecoming game. Parkey is said to have had a good spring. Parkey's backup Chandler Brooks hit three field goals longer than 40 yards in Auburn's A-Day Game. Junior Drew Alleman takes over as the LSU kicker, and he hit 3 of 4 short to medium field goals in the spring game, but the miss was only from 25 yards. According to his coaches, he's been consistent in practice. Advantage: Auburn.

Auburn offensive line vs. LSU defensive line: Auburn came out of spring with sophomore Blake Burgess starting at center, with senior Jared Cooper and junior John Sullen at the guard slots. Only Sullen has significant front-line playing time inside. Tackles will be seniors Brandon Mosley and A. J. Greene. Like Auburn, LSU is young in the middle. Starters will be sophomore Michael Brackers and redshirt freshman Anthony Johnson. LSU defensive coordinator Jon Chavis asks a LOT of his tackle. They are expected to get a push in the middle, and disrupt the inside running game, as the linebackers sit back and read the play. Against Auburn last year, LSU got pushed back up front, and Auburn ground out 440 rushing yards. That forced LSU to load the box, and made them vulnerable to the outside. It's a key matchup to watch again this season. Senior LSU end Kendrick Adams is a solid run stuffer, while sophomore Sam Montgomery is a quick pass rusher who tallied 6 sacks in only 5 games last season. Junior Lavar Edwards adds quality depth at end. Advantage: Even.

Auburn backs vs. LSU linebackers: The Auburn Tigers return the one-two punch of freshman All-American Michael Dyer and Onterrio McCalebb at running back, and will look to the incoming signing class to fill out the depth chart. LSU must replace star linebacker Kelvin Sheppard, but they have the talent to do it. Seniors Stefoin Francois and Ryan Baker started every game outside for LSU last season, and combined for 124 tackles. Replacing Sheppard in the middle will be either senior Karnell Hatcher or sophomore Kevin Minter. Advantage: Even.

Auburn receivers vs. LSU corners: Auburn will rely heavily on returning veteran Emory Blake, and intriguing prospects DeAngelo Benton and Quindarius Carr. The Tigers chose not to test the LSU secondary last season, and that may be a sound philosophy this season. Junior Morris Claiborne was tested as a new starter last season, and responded with 5 interceptions and 6 pass breakups. He's got the size to bang with the bigger SEC receivers. On the other side, LSU will start sophomore Tyrann Mathieu, with quality depth being provided by senior Ron Brooks. Mathieu had 2 interceptions and 7 breakups as a reserve. Advantage: LSU.

Auburn secondary receivers and quarterback vs. LSU safeties: Auburn's most notable returning secondary receiver is tight end/h-back Phillip Lutzenkirchen, who was a clutch go-to guy last year. About half of his catches resulted in touchdowns. The Tigers also have options from the speedy Trovon Reed to the 290 pound H-Back LaDarius Phillips. Auburn is still in the midst of a quarterback race, but junior Barrett Trotter seems to have the upper hand at this point. Regardless of whether Trotter or sophomore Clint Moseley start, Auburn will field a quarterback with three year's worth of experience practicing the Gus Malzhan offensive system. Senior LSU safety Brandon Taylor had nine starts in 2010, and brings veteran leadership. Sophomore Craig Loston is penciled in as the other starter. LSU is very high on talented sophomore Eric Reid, who should see plenty of playing time off the bench. These guys are all good at making plays on the ball in the air, while Auburn will be playing a quarterback in his first Death Valley start. That makes it Advantage: LSU.

Whichever team is able to establish a consistent running game will have the upper hand in this one. Both teams have the pieces on offense to do that, and mistakes will be critical. The game may come down to which quarterback takes care of the ball better. While Jordan Jefferson has not yet blossomed as a consistent passer, he can scramble well and hold onto the football. We really don't know how Auburn's quarterbacks will react under pressure.

Auburn/LSU games are always physical, and it's in the middle of a brutal stretch for both teams. Auburn has not won in Baton Rouge since the "cigar game" in 1999. Only a couple of the contests there have been close. Auburn suffered dominating losses in 2001, 2003 and 2009. Even in 2007, LSU outplayed Auburn badly in the 2nd half, and only LSU mistakes kept it close. It is always a tall order to go into Baton Rouge and win.