A Better Auburn Offensive Line In 2011?

Share All sharing options for: A Better Auburn Offensive Line In 2011? 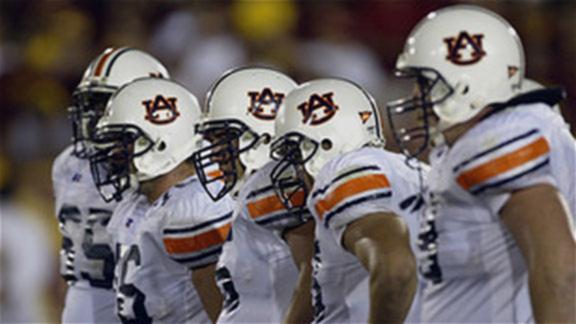 The Auburn Offensive line set several  records the past two seasons and may have been the best in school history.

With 3:05 to go in the 75th Iron Bowl, Auburn Quarterback Cam Newton faked a handoff and moved to his right along with most of the Auburn offense. As the Alabama defense reacted to a possible running play or pass to the right side, Newton hit TE Phillip Lutzenkirchen on the left side of the end zone for the go ahead touchdown. And Auburn completed the greatest Tiger comeback ever, defeating Alabama at home 28-27.

When Phillip made the play all eyes in the stadium were on the Quarterback, the Tight End, and the Alabama Secondary. No one noticed the men who made the historic touchdown  possible ... Auburn's Offensive Linemen.

Most will have to admit when watching a game - they look at the quarterback, running backs, wide receivers, tight ends, the pass rushers and the secondary. Very few pay any attention to the big guys up front who deserve the credit for making the offensive machine work.

The so called play makers get all the glory. Yet in football everything begins up front. The front five is the foundation for the entire offense. Much like a house will not stand that has been built on a weak foundation, a football team is only as strong as it's offensive line.

The last two years the Tigers may have had the strongest, the best O-Line in Auburn history. The 2010 unit set a school record of 6,989 total yards (3,987 rushing), with a 41.2 points per game average. The O-Line combined for 165 career starts. By contrast the returning linemen have a combined total of 15 starts.

Can the 2010 group be as good as last year's National Championship Offensive Line?

Much has been made in the media about Auburn losing their four battle tested veterans, but the 2011 Tigers do have championship caliber talent, albeit young and inexperienced.

That talent starts with Brandon Mosley who started 11 games last year after coming on for AJ Greene when AJ suffered an ankle fracture in the Clemson game. Greene has been injured in fall practice but is still expected to play this year.

Many look for Greene to step in to Lee Ziemba's vacated left tackle spot. If he does not recover well enough to start on September 3rd, look for true freshmen Greg Robinson or Christian Westerman to get the nod. Both have been working on the left side in preseason practices.

Offensive Line Coach Jeff Grimes said this summer that Westerman, Robinson and Center - Reese Dismukes are some of the best freshmen he's ever coached. And that's tall praise from a guy who is not used to giving out accolades. At least not this early.

"I think all three of those guys have a chance to potentially help up this year," Grimes said, "and be phenomenal players before they're done."

From all accounts, Dismukes is giving sophomore Blake Burgess, who was Ryan Pugh's back up in 2010, a real run for his money. Don't be surprised if Reese gets the nod, especially since Grimes has said this past week that he may start freshmen in the first game.

Chad Slade, Ed Christian, and Aubrey Phllips are working to crack the line up and there are four true freshmen pushing the upper classmen for a position including Thomas O'Riley as well as redshirt freshman Eric Mack.

These promising freshmen may not start the first game but there is a good chance that freshmen will be in the starting rotation by the third or fourth game, there is just too much talent there for that not to happen. Until the fourth game, you can count on freshmen being at least in the number two spot on the depth chart.

All this youth may concern some but Coach Grimes is confident. Besides the coaching staff is laying a foundation that a strong offense can be built upon. And Coach Grimes reportedly told his linemen that he doesn't expect them to live up to the National Championship Offensive Line ...

He expects them to be better.