Share All sharing options for: 10 Rules New SEC Applicants and CFB Need to Know Before Joining Our Conference 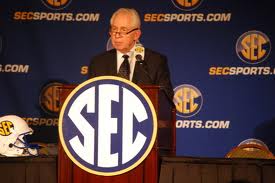 With college football on the verge of blowing up and the start of the big conference land grab once again upon us, I think it important to establish some base guidelines before virtually the entire football nation may make application to join the SEC now that the borders could be thrown open. Thinking quickly...

1) It's called the Southeastern Conference. We were the original sports conference, albeit a few name changes ago, but we've had this one for the last 78 years. And considering the brand image we've so carefully built, we ain't changing it. I don't care if we draft Oregon State and Syracuse, the name stays put. No hyphenated Bologna either.

2) We're sticking with divisional play. We pioneered it and everyone else followed.We may have so many teams in a division that each doesn't get a chance to play the other--it doesn't matter. We may have to use all twelve games as conference matches but we're going to get our champion.

3) Okay, maybe we might have to split into four divisions and lobby the NCAA for two extra conference playoff games. At that point we have so much clout we make our own rules, or just secede from the NCAA. Your choice.

4) Our conference championship games(s) are played in Atlanta. That's our hub and we're sticking to it. We're not rotating it or passing it around. Jerry-world can host a kickoff game, but that's it. Atlanta is a great town and besides, it's real easy to fly into.

5) Our conference is headquartered in Birmingham, which doesn't really have college football played in it anymore, so actually, we might be flexible on where to locate conference headquarters--just as long as it's within 100 miles and due east.

6) We decide what division to place you into. So don't fret. You still won't get hosed as bad as Auburn once did. If we break into quarters, we may have to form an AAA division of the SEC for teams to earn their way into the main conference events.

7) We divide our loot pretty evenly, but if we're considering diluting our product somewhat , we may have to consider a graduated revenue disbursement plan. Don't worry, a rising tide lifts all boats, battleships and dingies alike. Man, I hate using Alabama references in times like these!

8) We prefer natural grass fields, cheerleading squads that have girls and stadiums that sell out regularly. We'd also like you to have a fight song that doesn't borrow in large part from the Battle Hymn of the Republic.

9) BCS Bowl Gameswill be expanded to at least five and there will be at least one at-large slot available for any SEC divisional champ to participate. If Notre Dame wants to join the SEC, we get their slot, too.

Okay, what did I leave out?