Tigers Get Past the Owls.

Share All sharing options for: Tigers Get Past the Owls. 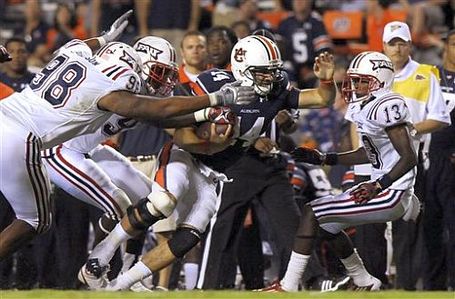 FAU got after Barrett Trotter.

War Eagle, everybody! It's time now for the Acid Reign report, on Auburn's 30-14 win over Florida Atlantic. Most Auburn fans expected this game to offer a breather from the drama of the previous three weeks, but that's not what happened. The Tigers began the game by tossing up a wounded duck interception, and struggled to a 10-6 halftime lead. This game could have been close till the end, if not for an early third quarter pick six and a twisting, turning serpentine McCalebb screen catch and run. Those two plays broke open a tight game, and allowed the Tigers to finish with the game in hand. Whether Auburn had blown this game out, or struggled, one really can't draw too many conclusions from this sort of matchup.

When the worst defense and the worst offense in FBS football got together, one or the other had to give. Auburn tackled a little better than in previous games, but I don't think any of the Owl skill players would make it off the scout team at Auburn. Alfred Morris is a serviceable running back, and he did generate 5.7 yards per carry on 15 carries. That was a better average than any Auburn running back had in this game. I thank the Owls for not giving him more carries. The Auburn secondary came up with three game-turning interceptions, but it was against a quarterback who had a tendency to lob balls up for grabs. I'm not sure how much real improvement has been made. We still saw holes in the line that one could drive a truck through, and on a couple of 3rd down plays we generously gave a 20 yard cushion and an easy first down toss. It was nice to see end Corey Lemonier atop the tackles list, but the next three guys on the list play in the secondary. Despite the Tigers giving up 307 yards to this woeful offense, one must remember that backups played a lot of minutes. The starters basically only gave up one field goal drive just before half.

Having watched the Kentucky and LSU games of 2009, I won't say that this is the worst performance of a Gus Malzhan-coached offense. It's close, though. Perhaps the absence of guard John Sullen affected the line's chemistry, but I don't think that completely explains the Auburn blocking woes. The tackle-end twist continues to be trouble. I'm not looking forward to seeing Jadeveon Clowney taking free runs up the middle at Barrett Trotter. We can't blame Chris Slade for the troubles on the other side of the line. A. J. Greene struggled mightily in this game, drawing a holding flag, and allowing the end to get around him several times. Further hampering of Auburn's running game was ineffective blocking by the H-backs. Brandon Fulse, Ladarious Phillips and Chris Humphries all got looks. It seemed like none of them knew who to block.

Not all was bad about the offense, though. Barrett Trotter did a bit better job of taking off when his receivers were covered. He moved the chains several times scrambling. The wildcat package with Khiel Frazier looks good. Not only is Frazier a running threat, he seems to be making the right read on whether to give the ball off. Emory Blake continued his streak of games with a touchdown reception to seven. That's one shy of the record set by Terry Beasley set some forty years ago. Aside from a drop by Brandon Fulse, the receivers did a good job of catching the football.

Special teams were adequate, but not spectacular. I suppose the best part was by two players who did nothing. FAU refused to kick deep to Tre Mason and Quan Bray, and pretty much set Auburn up at the 40 yard line every kickoff. Cody Parkey added 3 more touchbacks to his list this season. However, the 4 kickoffs that were not touchbacks were returned for a 22.5 yard average. That's a step backwards in coverage. Steven Clark managed a 46.3 yard punting average, but we could not down any inside the 20 yard line.

Defensive Line: D. End Dee Ford sat out this game, and Nosa Eguae only played a few snaps. Corey Lemonier led the way on defense with 6 tackles, including a sack and another tackle for loss. Beyond Lemonier, this unit contributed 9 tackles. At times, Jeffery Whitaker and Craig Sanders got a push. Ladarious Owens had a drive-stopping tackle for loss. These guys combined for 4 tackles for loss, but they were going up against a line that had given up 20 in two games. At times, there were huge holes in the line.

Linebackers: C-. As with the line, these guys improved a bit this week. Jake Holland came up with an interception down the middle. Darren Bates played a solid game, and was occasionally an effective blitzer. These guys did a fair job of slowing the running game down, but there are still major coverage issues. Swings to the running backs and dumps to the tight ends are still there for the taking.

Secondary: C+. Until we stop giving up a 15 yard cushion on the edges, this grade will not go higher than a C. A lot of players rotated in and out, and they largely did a good job preventing the big passing play. The longest pass allowed on the day was 23 yards. The unit broke up several passes, forced a fumble and picked off a couple of balls. Auburn has some talent and depth here, and it's good that they are getting experience.

Punting: B+. It's hard to argue with a 46 yard average, but two of three punts were kicked into the end zone, with no chance to down it. Those two touchbacks bring the net average down to only 33 yards. There was good coverage on the 43 yard punt, as returner Travis Jones lost a yard on it.

Punt Returns: C. There were no gaffes, but certainly nothing special here either. Trovon Reed let the one deep punt inside the ten go, which was the right decision. Reed netted only 14 yards on the 3 he fielded. Auburn sent a lot of men to try to block the punts, and downfield blocking was nearly non-existent.

Kick Returns: C. It's a great tribute that FAU refused to kick deep, instead kicking 3 short, and 1 out of bounds. On the three short kicks, we were close to turning the ball over a couple of times. Our up backs need to be a bit more sure handed.

Place-kicking: A-. Cody Parkey did miss a 47 yard field goal attempt late, but I won't count off much for one that long. Parkey hit 3 of 4, and is 6 of 7 on the year. Parkey hit three more touchbacks on kickoffs, but did not seem to be getting nearly as much height on the ball. Auburn gave up 22.5 yards on 4 returns, and that's likely due in part to line-drive kickoffs.

Offensive Line: F. When Florida Atlantic sacks your quarterback 3 times and tallies 7 tackles for loss, you've got problems up front. The Tigers had false start penalties on Brandon Mosley and Reese Dismukes, and a holding call on A. J. Greene. Most alarmingly, this line only occasionally managed any push. Auburn tallied only 137 rushing yards, and 55 of that was on quarterback scrambles.

Running Backs: B-. I think the bright spot of the Auburn running game is that these guys are not putting the ball on the ground. Excellent ball security! There's just not a lot of room to run right now. Points off on pass protection problems. We really miss Eric Smith and Mario Fannin this year.

Receivers: C+. Aside from Emory Blake, we really didn't see much separation by these guys, nor was downfield blocking very good. When we throw that quick screen to Trovon Reed, the other wide receiver out there is supposed to take out the corner. Instead, Reed is having to sidestep the corner, and often the other receiver actually gets in Reed's way. We must force the other team to put another defender out there, to open up the running game. Reed and Blake both had a couple of really good catches.

Quarterback: C+. It was a poor start with a short-armed interception, but after that Trotter did a decent job dealing with a surprising pass rush. There was a tendency to hold the ball too long, but then again you don't want the quarterback to force things that weren't there. Trotter did a better job of running for the first down when the lane was there.

Preseason is over, folks, and a murderous October awaits. Next up for this Tiger team is a nationally televised game in Columbia. Defending SEC East Champion South Carolina is undefeated this season, and I'm quite sure they remember the 56-17 beatdown they took in the Georgia Dome last December. Luckily for the Tigers, South Carolina does not seem to be hitting on all cylinders. They've had a tendency to give up big plays on defense, and the offense is turnover prone. They've found a way to win each week, but it hasn't been pretty. Auburn has a chance to go in and make some noise, but it will take the best effort of the year thus far to win. I think this year's secondary matches up better with Carolina's good receivers, but Auburn's shaky front seven must find some way to slow Marcus Lattimore down. Steven Garcia must be pressured into some mistakes.

The Tiger offense will have to be opportunistic next week. South Carolina loves to blitz, and play man to man. There's little chance of maintaining a consistent running game against that bunch. What Auburn must do is avoid turnovers, spread the field and exploit one-on-one matchups.

Four games into this season, I still don't know what to expect from this Tiger team. We have the talent to win in Columbia. We also have the possibility of taking a really big beating. There's little the Tigers can do but keep on working, and we'll hope for the best.