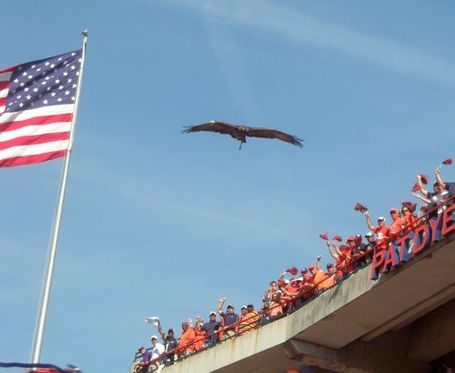 It's always great to be an Auburn Tiger!

War Eagle, everybody! The last BCS game has been played, all results are in, and we can finally put the 2011 college football season to bed. Prior to September of last fall, I think most Auburn fans would have figured on 8 wins being a moderately successful season. Historically, Auburn has won 718 games, lost 405, and tied 47. That's a 63.3 percent winning percentage. This year's 61.5 percent figure is pretty average, in the historical sense.

Part of the reason for Auburn disappointment was due to the margin of the 5 losses, none by fewer than 14 points. Also, Auburn's played well above their historical average over the decade prior to 2011, posting a 72.6 percent winning percentage, with only one losing season, and two undefeated ones. I'd say that since the Dye era, expectations are that Auburn should annually finish better than 8-4. It's a tired old excuse to point out Auburn's youth this past season, but hopefully the bumps, bruises and lessons of the 2011 campaign will help down the road.

It is worth noting that in the final AP poll, all five teams Auburn lost to finished in the top 25. Alabama was 1st, LSU 2nd, Arkansas 5th, Georgia 19th, and Clemson 22nd. For good measure, Auburn defeated South Carolina, who finished 9th. Of Auburn's thirteen opponents this past season, ten went to bowl games. Auburn beat half of those teams. Bowling this season were Utah State, Mississippi State, Clemson, South Carolina, Arkansas, Florida, LSU, Georgia, Alabama and Virginia; and 5 of those teams won their bowl. Auburn was 3-2 against bowl winners, with wins over MSU, USCe, and Florida.

The 2011 edition of the Auburn Tigers fielded great special teams, a shaky offense and a porous defense. The defense allowed the most points in Auburn history, ever. The previous record was in 2009, when Auburn gave up 27.5 points per game. The last Auburn team gave up 28.9, which surpasses the previous record of futility by a whopping 1.4 points per game. I suspect this trend will go the other way starting now. The Tigers have hired a hard-nosed, well-respected coach in Brian vanGorder. Best of all, the defense has a good number of talented veterans, above average depth, and the table should be set for dramatic improvement in 2012.

Against top-tier opponents, there's no denying that Auburn's offense fell largely off the map. Things are much less clear cut from here. With three weeks to go till National Signing Day, Auburn has yet to sign an offensive coordinator, no proven quarterback set to return, and a very shaky situation was far as blockers. Both starting offensive tackles graduate, and the Tigers have only one proven tight end/H back. There's work to be done, here.

For better or worse, Auburn closes a three year era running the Gus Malzhan offense. There were records broken right and left, but also some games when the offense looked as clueless and inept as LSU did in the BCS title game this year. One comment from an earlier thread really stuck with me. Way back in November, esteemed TrackEm regular Col. Angus stated that Gus Malzhan's offense works well against 2nd tier teams, but not elites. (unless we had Cam Newton!) I wanted to debate that question, but didn't have the time till now.

Turns out that the numbers pretty much bear out what the Col. said. I looked at the 2009 and 2011 seasons, against the AP poll at the time of the game. The bottom line on any offense is points scored. With that in mind, how many points did Auburn score against top 25 teams in those two seasons?

With the number of top 25 teams Auburn plays, an average over 20 points per game is essential, otherwise those 5-loss seasons will be common.

It's that time of year again. Coaches are making last-ditch visits to prospects, and players venture out into cold gray mornings to pump iron and run. The time to start building a champion for 2012 is now. The sooner coach Chizik gets his offensive staff settled, the better, I'm thinking. It's going to be difficult to land last-minute offensive stars if they aren't sure what style Auburn will be running next season.

And now, a bit of a word on Auburn basketball. I'm a pretty sporadic, and frankly fair-weather fan of the roundball. I might listen on the radio a bit. Catch 'em when they are on TV. I planned an early bedtime last night, but turned on the TV to see how bad it might be against Kentucky. My first impression was, wow! The new Auburn Arena looks GREAT in hi-def! The crowd was rocking, and it sounded like one of those massive east coast grudge matches. The Auburn fans really got after it in their first sell-out of the year.

I thought the team fought hard, and well against the number two team in the country. If we can get that kind of intensity against the rest of the conference, I think Auburn will return to the post-season. The most obvious takeaway from the game is that Kentucky is a lot bigger than Auburn, with similar agility. The second item of note is that Auburn does not have any consistent three point threat. UK did ratchet up their defense in the second half, and doubled down on Rob Chubb. Auburn was still hanging with them, till the Wildcats knocked in several long range bombs. Three pointers change games, and that's what happened down the stretch. Still, it was a very encouraging game, after the shellacking at Vandy earlier.

War Eagle, folks! We'll be watching the final three weeks of recruiting, and the coordinator search with great interest the next couple of weeks. If there's anything to be expected in the search, it's that you won't know who's being considered till it's announced, and it will probably be a shocker. The CIA could learn a thing or two about keeping secrets, from Gene Chizik.