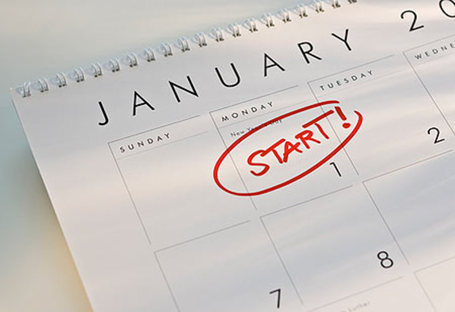 How are you doing on those new year's resolutions you made? If you're smart, you don't announce any of them on Facebook or other social media. It makes failure a little bit more palatable. Now that we're in the first full week with no college football it seems as good a time as any to take an introspective glance into our sport and think about what we could do to improve it.

Make no mistake. College football is booming, but there's always room to tweak this grand old game for the better. If CFB was able to make resolutions like a person does, here's a few I think it should seriously consider for the new year--some workable and others a flight of fancy, but a guy can dream, can't he?

PLUS ONE There's no better time to discuss the first incarnation of a playoff than following the SEC's recent domination of the BCS CG. If there's one thing that's got even the curmudgeonly PAC 12 and Big 10 commissioners willing to consider the idea, it was having Alabama and LSU play for all the marbles. Officials are soon to sit down and discuss the topic and have assured us that nothing will be off the table.

A plus one is simply a four-team playoff: One plays four, two plays three and they meet in one more game for the title. You better be prepared to take it or leave it because we're not getting more than four teams initially for years. It'll take at least two more years for us to get this far. Naturally, there would have to be some fine tuning to get the format in place: establish clear-cut conference champs as contenders (you too, Notre Dame--time to sign up somewhere), remove at least one game from the regular season, shorten the interval between the end of the season and the major bowls and decide whether or not to utilize any of the big bowls in the semi-finals--plus about a dozen other things I'm forgetting right now.

CAPS ON CONFERENCE NUMBERS I really wish they would have inserted this one in after last season when we got the first whiffs of CFB blowing up. Now it's too late for the SEC's expansion plans but let's set a reasonable cap at 14-16 teams. Any more than that and you run the practical risk of having so many conference games that you can't play anybody else. Also, we still don't want a power-grab or bidding war to erupt that compromises existing regional conferences and morphs into inter-continental Pangaea-like athletic blobs in a vain attempt at securing power and market share. I'm copyrighting that term, BTW.

BOWL GAME CURTAILMENT Guys, there's got to be a limit on this. It's growing out of control--fed by an apparent abundance of TV money that make Fannie and Freddie largess pale by comparison. Some of these bowls, acting as actual or quasi-charities, are starting to turn corrupt and sully the reputation of the sport--NOT TO MENTION all the empty seats you see in the stadiums. It's diluting our product and it cheapens teams that really are bowl-deserving.

Maybe it's this everybody wins, yay mentality that we have in our society that instill the notion that virtually all teams that can fog a mirror and teeter on the edge of .500 get to go to a bowl game. Maybe it's that every po-dunk backwater in a mild clime wants their municipality-fiefdom to have the glitter of a game that nobody goes to since there's absolutely NO apparent barriers to entry.

Most of the teams that go to these loser bowls don't really want to spend the money--they net a loss many times, but it's the spectre of turning it down that compels them. If they didn't have these bowls, it would solve a lot of problems and actually go a long way to restoring the honor and spectacle of being bowl eligible and bound. If they don't want to listen to me then do at least this: give unsold tickets away to charities so kids can go. Fill up the stadiums. Empty seats and Mondays always get me down.

Issue licenses for the bowls for three years that they must bid on. Then check their stats: they must receive minimum local attendance and participant patronage. They must also achieve certain TV ratings. If they don't, then revoke the license and let someone else try. Nobody else want to try? Then show bowling tournaments or CBB--they probably get the same ratings as the loser bowls.

CLEAN-UP RECORD KEEPING With over 140 seasons of stats, games and championships and hundreds of teams, there's almost an equal number of arbitrary record keeping schemes to go with it. While the NCAA does not sanction a national title in the FBS, they probably need to lay some patch work for the way teams can look back in the early days of CFB and claim championships. They also need to go ahead and put their stamp on the BCS officially and then stick with whatever it eventually morphs into. We need some leadership in this area.

Most modern day students of the game are starting to consider consensus national championships as the new benchmark to measure a team's historic success. These are generally regarded as those awarded once the media polls began to rank teams nationally in the mid 1930s. Conference championships certainly existed way before that because the conferences themselves go back over 110 years and the teams in a conference generally played each other.

We've just got to find some rallying point in between the modern-day BCS and the old-timey mythical, minor-selector or back-dated titles. In 100 years from now, I imagine that the true tally of CFB national titles will actually start with the BCS or Bowl Coalition standard from the 1990s on.

NO STIPENDS I've definitely come full-circle with my thinking on this topic. With recents talks about paying players an amount of money to cover incidentals (read: a salary), I believe the law of unintended consequences is waiting to spring on this one. Never mind the disparity in the schools, the conferences and the players themselves--someone WILL be unhappy--think about the justification that it will leave the unscrupulous sort. Paying the better players/schools more under the table will be perfectly acceptable.

People argue that the players are basically pros anyway, bringing in hundreds of millions of dollars for the schools every year. Professionals? I tell you what. If they want to get paid, let's have the NFL start their own farm system. Let them draft the players right out of high school--like they do in baseball. You never hear of schools being put on probation for baseball infractions. A player can go play semi-pro ball and have his individual talent developed--and in front of virtually no fans, I might add--or you can take the glory road and go play in front of tens of thousands in college stadiums. It's the same decision other high school graduates get to make every year--go to work or continue school.

If you decide on the college route, we only have two rules: #1 you qualify on your own merits, according to the average admissions at that school--no more special admits for kids who don't belong in college anyway for reasons of academics or character and #2 the only compensation you receive is the education you are offered as an inducement. No payment. If you want that, you have another path you can choose. Even penalize the players who still decide to drop out of college, trying to use it as a more glamorous farm system, by making them wait out their eligibility before they can play semi-pro ball.

We've got to do something to maintain the credibility of not only our sport but our institutions. I'm tired of being a hypocrite. You're either a student athlete or you're not. Let's quit trying to pretend and deal with the heart of the issue. College football is different than the pros. You can have an appreciable difference in the level of talent and not lose fans. We'd still be cheering for our teams just as enthusiastically even if they were literally half as good as they are now. Let the pros have the players who seek nothing initially but a profession. We'll take the kids that want to be in college and belong there.