Shot in the Arm for the Auburn Defense?

Share All sharing options for: Shot in the Arm for the Auburn Defense? 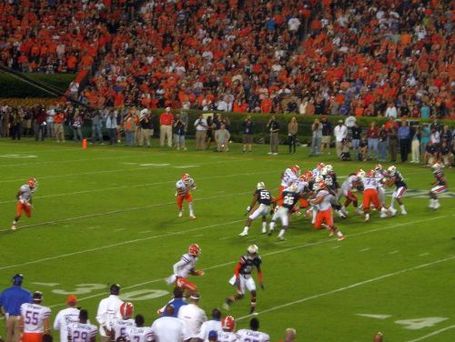 War Eagle, everybody. Had an interesting request this week, from the SBN Pittsburgh site wanting to know what to expect from Ted Roof. He's planning on doing a Q & A post on the Penn State SBN site, and I'll link to that when it shows up. In the meantime, I had to look back and review Roof's tenure at Auburn. It's important to note that Auburn on defense in 2012 will be mostly made up of the same players who gave up 28.9 points per game in 2011. Brian vanGorder will do things his way, but I think it's unrealistic for Auburn fans to expect an immediate return to the Chizik/Tuberville point averages in the low to mid teens. In the meantime, who was Ted Roof philosophically, and why did his defenses give up so many points?

Bottom line, Auburn gave up 27.5, 24.0, and 28.9 points per game in the three years of Roof's tenure. The higher two numbers are the worst two averages in Auburn's 120 year history. By comparison, Tommy Tuberville's defenses tended to give up in the mid-teens. At a defense-minded school like Auburn, I think most folks wanted a change.

It's difficult to pigeon-hole Ted Roof to any particular style, because when he has the matchups he wants he likes to be very multiple. Ted Roof believes in gap-control, and he will try to put enough players in the box to fit one player to each gap. At least half the time, he'll show a traditional cover-two look before the snap, but usually one safety rolls toward the play, and the defense really plays cover-three, with each remaining DB responsible for a third of the field.

Ted's defenses were best against traditional two backs and a tight end offenses. He'd do a great job of filling lanes, getting after the quarterback, and causing turnovers. The downside to the cover-three philosophy is that each defensive back has to keep his man in front, and soft coverage allows lots of throws underneath. Roof believes that most offenses are going to have a hard time completing enough consecutive 5 yard passes to move the ball down the field for a score. Much of Auburn's failure to successfully stop opponents these past three years have been due to match-up problems. For instance, this past season, everyone in the playing rotation on the defensive line was either a freshman or a sophomore. No upperclassmen, AT ALL. Gap control is a great idea, but how many times will a 19-20 year old true freshman or sophomore get blown off the ball in the SEC? Roof's biggest weakness shows up against spread attacks. He will try to leave one cornerback out in the flat to deal with twin receivers, and he'll use a ten yard or more cushion. It's pretty simple for a modern division one quarterback to take the snap and quickly fire it out to a wide receiver with a blocker in front. Negates the pass rush, too.

Each year at Auburn, there have been different problem areas due to a lack of quality depth throughout the whole program. Roof's first season, he inherited a line with three good starters, but no solid 4th player, and little depth. At linebacker, he had two respectable players (who had to play every single snap!), and walk-on level talent otherwise. In the secondary, he had one NFL cornerback, one banger a step slow, one slow run-stopping safety, and an 18-year old true freshman 2 star recruit at free safety. Defenses would pick on the slow pass defenders, and run at the suspect lineman and linebacker. In year two, Roof was greatly helped by the emergence of Lombardi-winning tackle Nick Fairley. Fairley was quick, mean and had an incredible knack for jumping the snap count and being in the backfield before linemen could rise up out of their stances. However, Auburn was still thin numbers-wise in the front seven, and very patchwork in the secondary. At corner, Auburn still had the one tough corner without enough speed, or two little bitty guys who could fly, but not necessarily deal with the plethora of big receivers in the league. You didn't want either safety in 2010 trying to cover one on one, due to a lack of speed. In Roof's third season, he finally had a secondary that was fast enough, but still very young. But a front four with no upperclassmen is going to very a difficult situation for any coordinator in BCS AQ conference football.

So what does new coordinator Brian Van Gorder inherit? I think the greatest asset is a good number of fast, talented players in the secondary. Even if senior T'Sharvan Bell doesn't heal his wounded knee quickly, we have at least 4 SEC-battle-worthy corners, and three very fast safeties. Auburn will have the speed to match up one on one, and Auburn will be able to use a lot more looks rather than strictly trying to prevent the big ball.

Auburn's defensive line was a great concern this past season, and the hope is that as these young freshmen and sophomores work though the off-season, they'll get a lot stronger. We've seen flashes already. Jeffery Whitacker got better all year. Sophomore to be Gabe Wright looked great in the 4th quarter of the bowl game. Lemonier, Eguae and Dee Ford should be among the elite SEC pass rushers next fall. We're hoping for dramatic improvement out of the line, and I think that would have happened regardless of who the new coordinator was.

Auburn's concern going into 2012 on defense is the linebackers. As the season wore on last year, Auburn hung their hopes on Eltoro Freeman. He played with fire and passion, and made some big hits. He couldn't do it alone, though, and sometimes played out of position. Auburn gave up 45 to LSU, 45 to Georgia, and 42 to Alabama. We return starters Darren Bates, Jake Holland, and Jonathan Evans. As a senior, Bates has the tools to be a good one. He's always been fast for a linebacker, but sometimes subject to being mauled by bigger SEC lead blockers. From all indications, Bates is gearing up for a run at the NFL, and you'll see a much nastier product on the field in 2012. It's up to Holland and Evans to step it up this year. Jawara White is finally healthy, and he saw a good bit of action this past fall, also. If Auburn is to get the points down under 20 per game this coming season, it will be because the linebackers stepped up.

Can vanGorder do it? Can he mold these three units into a tenacious, attacking machine? Auburn fans are excited about the prospect, but there are sure to be growing pains. My guess is that we'll be better next year, but not elite. Here's hoping the team proves me wrong, and we field a shut-down unit like the 2004 Tigers! War Eagle!