A Look at Scot Loeffler

Share All sharing options for: A Look at Scot Loeffler 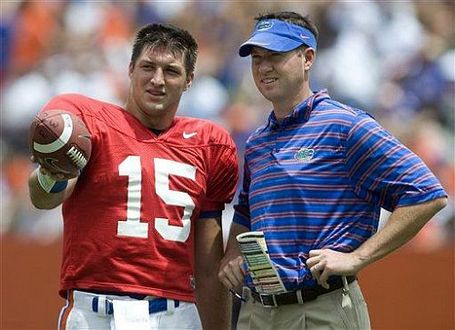 Who's driving the bus now?

War Eagle everybody! It's been a tumultuous few weeks for Tiger fans, but last weekend things settled down when head coach Gene Chizik named Scot Loeffler as Auburn's new offensive coordinator. I think it's good to have the staff set going into national signing day. I know I'll look forward to watching A-Day this season. If nothing else, we'll find out what the new coaches consider to be "base" offense and defense.

On the defensive side of the ball, I think Brian vanGorder is pretty much a known quantity as a defensive coordinator with a decade or more of experience in the position at every level of the game. I'll be honest, here. The first thing that jumped out at me when I started reading Scot Loeffler's history is that he has only a single year of experience as an offensive coordinator, and that was at Temple. One year, in the MAC.

It's a funny thing. If Tommy Tuberville had made this move five years ago, we'd have been incredulous. Up in arms. Asking if the man had lost his mind? And with good reason, after Nall Ball and other assorted incidents. I suppose after the past few years, perspective has changed. We hired a 5-19 head coach and a high school coach to run the offense, and we won a national championship the second year. In fact, of Gene Chizik's hires, only the veteran coordinator (Ted Roof) didn't work out so well. Rather than jumping off buildings, I think the Auburn faithful are confident that Chizik knows what he's doing.

So we know that Loeffler has only been a coordinator for a year. What is his other background? We hear Tom Brady and Tim Tebow mentioned frequently in connection with Loeffler. Did Loeffler recruit these guys out of high school and turn them into great quarterbacks? Well.. not exactly. Let's take a closer look.

Loeffler was a Michigan quarterback from 1993-1996. An injury ended his playing days, so he became a graduate assistant at the same school. During that period in the late 1990s, Michigan produced Brian Griese and Tom Brady, both of whom ended up as NFL quarterbacks. Whether a grad assistant gets full credit for a quarterback's development is questionable, but certainly Loeffler did have SOME influence on things. Brady's last two years yielded a 61.9 percent completion percentage, with 35 touchdowns and 18 interceptions. Most importantly, he averaged 7.55 yards per pass. These are good numbers, but certainly not great.

John Navarre was a redshirt freshman when Loeffler left to take a job at Central Michigan. Navarre went on to be a three year starter at Michigan. His career numbers include a 56 percent completion percentage, 72 touchdowns, and 31 interceptions. Navarre averaged 6.77 yards per pass. Again, those are solid numbers. Navarre passed for over 9000 yards in his career, which says good things about his durability in the Big-10, if nothing else.

After a two year stint as the quarterbacks coach at Central Michigan, Loeffler returned to Michigan as the quarterbacks coach in 2002. He finished up Navarre's last two seasons, then worked with Chad Henne. Henne went on to start for 4 seasons, and most of his numbers would be school records if he had played at Auburn. 828 completions, 1387 attempts, 37 interceptions, 9715 yards, and 87 touchdowns. That's a career 7.0 yards per pass average.

Loeffler was quarterbacks coach for the Detroit Lions in 2008, leaving Michigan as the Rich-Rod era began. I'll be brief here, and note that Detroit had an abysmal 0-16 season, and the organization dumped Loeffler's quarterbacks to draft Matthew Stafford.

Loeffler joined the Florida Gator staff in 2009, and coached quarterbacks two seasons there. He tweaked senior Tim Tebow's mechanics, and Tebow generated some rather eye-popping stats. Tebow hit 67.8 percent of his passes, with 21 touchdowns and only 5 interceptions. Tebow's 9.2 yards per pass average led the SEC, and he added another 910 rushing yards. Most folks remember only Florida's humbling SEC title game loss to Alabama from that season, but Florida did go 13-1, finishing 3rd in the nation.

The 2010 Florida season was a disappointment, and it was a downer for Loeffler. Junior quarterback John Brantley replaced Tebow, and his numbers were not so good. He hit 60.8 percent of his passes, but had only 9 touchdowns vs. 10 interceptions. Brantley averaged 6.26 yards per pass, which is pretty much average in the SEC. In Loefller's defense, it could be said that Brantley was really not suited to run Urban Meyer/Steve Addazio's spread offense.

After the Meyer regime collapsed, Loeffler landed the offensive coordinator job at Temple. With a bit of a look at the statistics, the job Loeffler did is outstanding. Temple could not keep quarterbacks healthy, but still managed to ram it down the MAC's throat with over 3000 rushing yards. A trio of quarterbacks completed 58.6 of their passes, for 11 touchdowns and only 4 interceptions. Temple averaged 8.3 yards per pass, which is a good number. This team finished strong offensively, tromping on Wyoming in the New Mexico Bowl, 37-15.

If nothing else, Loeffler's season at Temple showed great adaptability. He was able to devise an effective playbook, and translate that to success on the field. Temple averaged over 30 points per game under difficult circumstances. It should also be noted that Loeffler called plays on gameday for at least part of his time at Michigan. While he's only got two years of SEC assistant experience, he's schemed against Big Ten defenses for multiple years.

My verdict on this hire is that Chizik got a young guy on the way up. Loeffler's bio is more impressive if you look closely, and the fact that established NFL quarterbacks still look him up for off-season work speaks volumes. There will be some struggles at Auburn in the new offense, but Loeffler's history suggests that he finds ways to get it done. He's also been able to put young quarterbacks out there and make them productive quickly. As I said before, I'm really looking forward to seeing what his base schemes will be at Auburn, on A-Day. War Eagle!