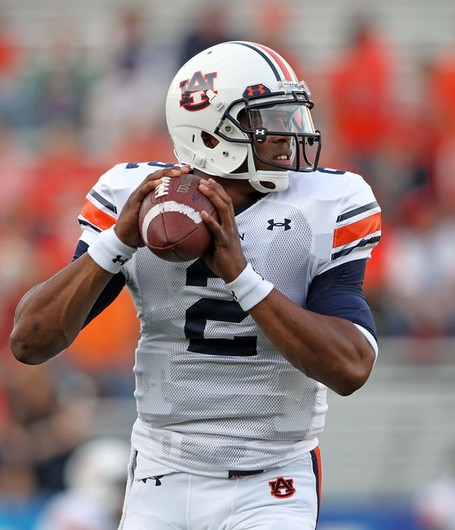 It's that time of year again as we head down the stretch toward NSD. Many questions are to be answered soon, the least of which is, did Auburn hire their OC in time to help make a strong finish?

Auburn can only sign 23 recruits if my calculations are correct, of which five are already enrolled, and on campus. They are Illinois transfer Fullback Jay Prosch, Quarterback Zeke Pike, Linebacker Javiere Mitchell, and Offensive Linemen Shane Callahan, and Patrick Miller.

Auburn has 12 verbal commits, according to rivals.com, that have yet to sign Letters Of Intent (LOI), or enroll early. That list consists of 3 Defensive Backs, 2 Offensive Linemen, 2 Tight Ends, 1 Linebacker, 1 Running Back, 1 Wide Receiver, and 2 Defensive Linemen.

If Auburn holds on to the remaining verbal commits, that leaves 7, as the number of athletes that can sign to play at Auburn this year.

Of course, the scholarship situation could change among the walk-on players, but I am thinking that Coach Chizik wouldn't yank a scholarship from a player, unless the player were to be suspended. As far as we know, there are no suspended players on the football team, at this time.

On to the targets of the AU coaching staff. We know that there are a couple or more of 5* recruits that are waiting until NSD to announce their intentions. Of which several have Auburn listed among their favorites. How many we actually get sign is another matter. These highly rated recruits include Stefon Diggs - WR, Aziz Shittu - DL, Eddie Goldman - DL.

There are so many 4* rated prospects, that I won't try and name them here because I would not want to leave a name off, and seem disrespectful. Rest assured there are plenty out there that have AU listed among their final choices, although we may not see but a few of them, in Orange and Navy.

Track Em Tigers will run an all day thread up until about 4 o'clock on NSD February 1st, 2012. Every single commitment will be covered here, along with information about each athlete that decides to join our wonderful family.

If you have seen this phrase - "Auburn will not run the fast paced offense, as it did under Gus Malzahn" - in an article this week, raise your hand. I think that's about everybody, thanks. You may put your hands down now.

That was some "pure genius" news reporting. To come up with the combination of a new offensive coordinator, and the idea that the play calling will be different, had to take some serious digging for the facts. Take that, as the most sarcastic statement to date from this writer. The list of comments by the national media that spewed the obvious was actually much longer, I just had to make that one the example. It's like one reporter wrote a story, and everyone else copied down his notes.

In fact, the media bias is so bad in this state, and indeed the south, that some columnists have turned to sarcasm, and comedy to point out this absurdity. Take for example THIS post on chuckoliver.net...

"After much careful deliberation we determined continuing our 120 year tradition of football was the appropriate decision," said Auburn Trustee John G. Blackwell. "Considering Auburn is one season removed from the national championship and Heisman Trophy winner, and remembering we did participate and win a bowl game this season, we felt scrapping the program - as so many suggested - would be an imprudent step."

Chadd Scott hits a homerun with this parody, of the type of reporting Auburn sees on a daily basis.

At least one local media outlet has the audacity to want a monthly premium for their stories about Auburn football. I won't pay for recruiting news, what makes them think I will pay for their coverage of AU sports? If you are a paying member for this local newspaper's AU sports news, don't take this as an offense. It seems to me to be a lazy way of paying for their expenses, instead of actually finding some advertisers to support their product.

It's not just the print media either. The vast majority of the talking heads of the local news channels are so in love with themselves and all things against AU, that they can only give you the worst information when it comes to reporting AU news. I shouldn't even call them reporters.

It's like they have all anted up and hired the former SID from our little brother school in West Vance.

You know the guy, don't you?

Sure you do. The guy that gave us the term Mythical National Championship. The spin master that dreamed up the supposed extra championships they now claim. 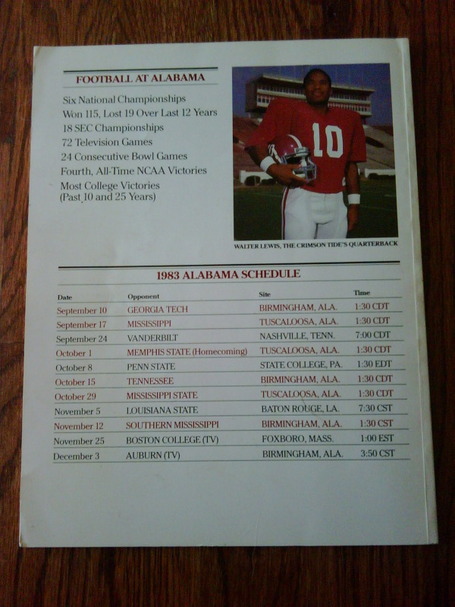 If you listen to the sports news in this state, and take every word as gospel, you only have you to blame. Now, you can't say that I didn't warn you.

Now that the hiring is done....

I would not worry too much about the pace, nor the "style" of offense CSL will run at Auburn. If he is as good as we think he is, Auburn's offense will be more flexible, and able to adapt than ever before. We won't see many 3rd and 1 situations, with our QB operating from the shotgun.

We could go on and on about what went wrong with Auburn's offense last season, but we don't want to live in the past. Auburn has a "new beginning" according to our beloved head football coach, and we should concentrate our visions and efforts in that direction.

This is one of those rare occasions, that I get to say, that I not only do I agree with a comment, but that I have been saying essentially the same thing. The winner this week is SandMountain Tiger

that Auburn lives and dies by quarterback play. It’s not hard to look over the history of Auburn football and see that when we have great QB play, we have great seasons. While this may come across as a "no duh" statement, I think the ability of our new coordinator to develop QB’s can only be seen as positive. If he can get the most out of our guys and scheme around their strengths, I expect good things.

Have we lost our memories so quickly?

Can we not recall the wonderment and excitement we experienced just two season's ago? Cam Newton is just the latest example of how a great QB, can carry a team when it needs to be carried, and take them to the pinnacle of their football world.

Does it take a Cam Newton to win? No. What it takes is leadership, and control. We seen that in force with Cam.

It has been my contention throughout the OC search that Auburn NEEDED a QB coach. Too many times last season we saw indecision on the part of the QB's. All three of them. Now we wait and see, if the "guru" can coach them up, or if we search other parts of the earth for another QB.

My belief is that Clint Moseley, and Kyle Frazier have what it takes to win at Auburn. They now have a true QB coach to get them prepared for the better defenses in the league. That is not a knock on Gus Malzahn. I remember that it took Gus four weeks to fully realize what a talent he had in Cam Newton.

In the upcoming season, we won't have four weeks to evaluate the talent. It has to be done in practice, and in the film room. We must punish Clemson, and send a message to all others on our schedule. We're back!