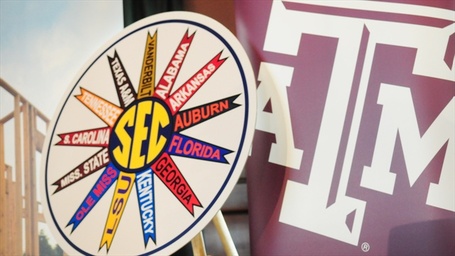 MEMO: Go ahead and have your graphics department add you to the wheel. It's official now.

Lost at the end of last year with the Chick fil A Bowl and New Year's approaching was any meaningful discussion on this blog of the duct-taped and stapled conference schedule the SEC office cranked out seemingly with the hope that the holiday weekend might keep down the fracas. They were right. Among SEC fans, the week following that announcement was the lead-up into the all SEC BCS title game and there has been nary a peep since. Maybe it's time to take a closer look.

Ten to one odds that absolutely no onegave a moment's thought to what the addition of two more teams to the conference would do to existing rivalries that go back decades before they engraved their invitations--and never mind the cluster we'd have if we only managed to snag one more team and not two. Slive and company in Birmingham have come up with a solution that's temporary at best and even more distressful, have not tipped their hand to what the long-term changes will be. A likely reason is because they haven't gotten that far yet.

The slate for 2012 is still at eight conference games, with teams paring off a rotator to accommodate Mizzou and A&M. (a nice run-down of the SEC schedule for each team shown here, courtesy of Outkick the Coverage) Many believe the SEC will be forced to add a conference game, going to nine, but we may not know that until after this upcoming season is underway or completed. Both new teams do play all their division mates, which will take up six games with seven teams a side now.. Auburn gets lucky by hosting the Aggies where previously we were on the road in Gainesville.

While few believe that intra-division foes should rotate (think mythical divisional title), even fewer want an end to long-standing cross-divisonal rivalries. For that reason, one permanent cross-rival must remain for everyone, most notably Auburn-Georgia, Tennessee-Alabama, and LSU-Florida. That's pretty much it. No other cross-divisional games carry as much weight, and looking at the teams, none carry as much clout. Those are the top six teams in the conference--and the reason why we'll never have the opposing division match-ups being permanently rotating.

If we maintain an 8-game conference schedule and there's six divisional games and one permanent from the other side, that would leave only one rotator--and a tumble-weed inducing ELEVEN year gap in between playing that team, assuming a home and home in successive years like we have now. That makes Major League Baseball inter-league play look consistent and recalls the days when certain SEC teams were virtual strangers (Auburn fans think LSU, Ole Miss, Vandy and Kentucky before the 1992 realignment.)

So it's virtually certain that the SEC adopts a nine game schedule, with two rotators, which with an additional two teams in residency would increase the gap between match ups from the four years we have now to five. That's still not comfortable enough for some, hence a persistent undercurrent of support for three rotators. But do they have to stop there? Is ten games out of the question, especially considering pressure if other conferences up the ante with added teams or more games?

Heck, add any more teams to the SEC and we'll have to have our own playoff just to determine the conference champ. Forget about adding additional games to the schedule for all BCS teams as twelve is plenty and may even have to be pared down from that one day for a future playoff. With nine conference games, that only leaves three out of conference contests and not much room for cupcakes (thankfully).

And what about the oft-rumored conspiracy for Auburn to steal to the other division in a trade for the new guy or a Vandy or Kentucky to be named later? I doubt it was even discussed in the negotiations for adding the new teams. While I'll always believe that we should have been in the East following the 1992 realignment, I think that we've grown fond of our new arrangement, and more importantly, the SEC has found balance, with the top six historic teams split evenly in the divisions so far. Perhaps in a few decades the conference hierarchy will be rewritten, and adjustments will have to be made, but I think we're good for right now.

Can you drive into College Station or is it only accessible by train?