I don't want to talk about Vandy, so let's talk about how adorable I used to be.

Yeah, about Vandy? I don’t really want to talk about it*.

So let’s just talk about what an adorable little Auburn fan I’ve always been: 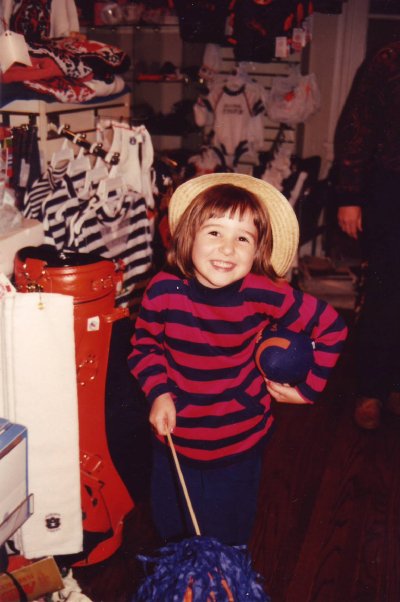 This picture was taken inside J&M Bookstore during one of the many expeditions my mom’s college friends took me on. You see, my mom came to Auburn in 1975, a brilliant and bookwormy college freshman who went potluck for housing and ended up meeting her two best friends in the world in Auburn Hall, Ginger and Ann (I called them both "aunt" when I was young without realizing they weren’t related to us at all by blood).

Ginger and Ann helped teach me how to be an Auburn fan. No matter what happens on the field, Auburn people love Auburn.

They also taught me all of the great cheers and songs from an early age. When the Auburn University Marching Band strikes up "Glory Glory to Old Auburn," most everyone I’ve ever met just sings the familiar chorus. But did you know that at some point, there were other words to "Glory"? I did, but only because I’ve sung them my whole life. It wasn’t until I started sitting in the student section that I realized no one else ever sang them.

Unless they’re playing a speed round, the AUMB generally plays "Glory" twice through. The first time used to sound something like this:

"Auburn had a football team when Georgia was a pup/

Auburn had a football team when Tech was growin’ up/

And the second was the traditional "Glory, glory" recitation.

I often wonder what happened to the long lost first verse. Did it fall out of fashion? Did we decide that calling out rivals in fight songs was passé? I know "War Eagle" is our official fight song, but "Glory" is a close second. I mean, we’re the WarEagleTigerPlainsmen. We can have WarEagleGloryTigerRag as our fight song if we want.

My mom’s friendship with her roommates is one that is uniquely Auburn. Three remarkable but very different women were bound forever by the mark Auburn left on their hearts. Ann is watching over all of us from Heaven now. I know she’s shaking her head at this season, but things will fall back in order soon enough.

Maybe it was because I lived there, but Auburn is interwoven throughout my entire childhood. I have great memories of huge tailgates, unbelievable games, running to Toomer’s as fast as my legs could carry me, and never wanting football season to end.

Take care this week, Tiger fans. If you're heading to the Plains, enjoy the scenery.

*Okay, I lied. I’ll talk about it. I don’t have anything happy or inspirational to say about Vandy. You don’t want to hear it anyway. Something or several somethings are broken on that team. We don’t know the whole story, but it appears to fall back on the coaches. Auburn likely won’t win a conference game this year. Burn it down.