Undercover Barner | Now back to our regularly scheduled programming

With that fun loss to A&M, I am now reasonably certain that we are all on the same miserable page: It's bad. Really bad. I don't want to talk about it anymore bad. So let's get back to our regularly scheduled programming: making fun of Bammers.

Share All sharing options for: Undercover Barner | Now back to our regularly scheduled programming

Maybe one day I'll write an ode of appreciation to Gene for 2010 that no one will want to read. It might be well-reasoned and thoughtful and just a little bit heartmist-y. It might thank him for bringing in one of the best players ever to grace a college football field and putting him in orange and blue. It might thank him for being a man of integrity, an Auburn man. It might even crack a joke about the weird short sleeve jacket thing. But today is not that day, and this is not that ode.

In fact, I'm going in a completely different direction. You know what they say, if you can't beat Bama because their offense is consistent and their defense is terrifying*, make fun of them for having the most ridiculous fanbase in the country**.

So that's what we'll be doing today. I have a few pictures that might make you laugh and take your mind off of the complete and total collapse of the football program. During the game, I mentioned on Twitter that this season had beaten the optimism right out of me (and those of you who know me know what a feat that truly is). Well, my optimism may be gone, but my sense of humor remains. Bring on the Bammers!

Full disclosure: I have indeed been saving these pictures for such an occasion as this. I hoard funny Bama pictures like they're legal tender. Don't judge me. I expect no less of the other side. Also, I took most of these from the passenger seat of my car (the significant other does most of the driving) so please excuse the awful quality. 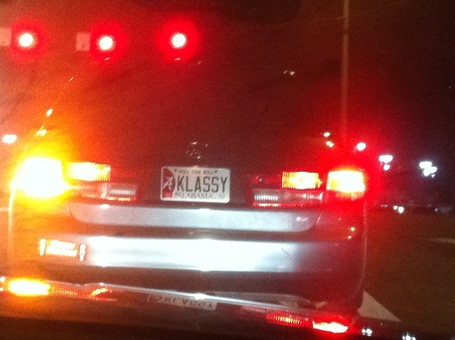 Oh now that you've TOLD us that you're KLASSY, we'll totally believe you. Wink, wink. 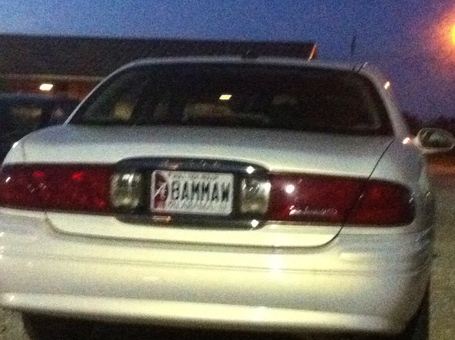 I won't pretend like I don't want to have a beer with "Bammaw." I'm sure she has some great stories about the Bear and whatnot. But I really am glad she's not ours. 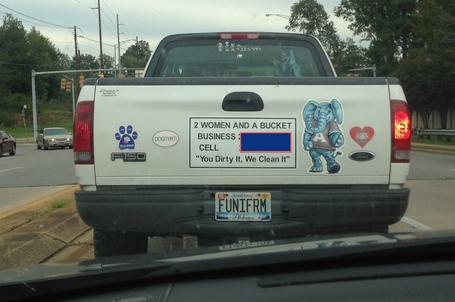 Sometimes I think the FUNIFRM is the only solution. 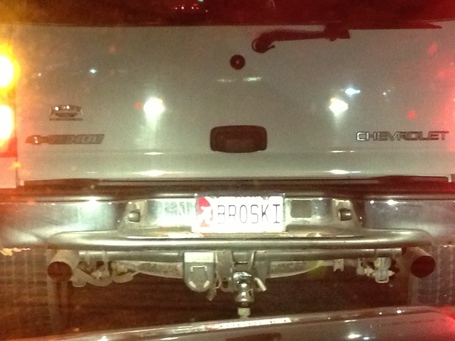 I hope this is the lowest quality photo I'll ever subject y'all to, but my phone doesn't take the best pictures of moving objects through my windshield at night. But just look at it. In case you can't make it out, that, my friends, is a genuine BROSKI. OF COURSE someone actually went through the trouble of getting a license plate that says BROSKI and OF COURSE that person is an Alabama fan. That's just how the world works. I'm willing to bet the entire contents of my checking account*** that Broski has Bama bangs. 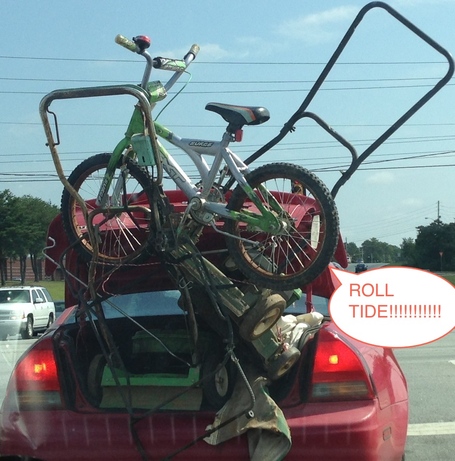 Okay so there appears to be a lack of actual Crimson Tide insignia anywhere on the back of the vehicle. But let's just agree that the completely legitimate speech bubble that was in no way added in Apple's Preview 10 seconds before I uploaded the picture represents an accurate portrayal of the conversation going on inside this sport utility sedan.

I think the moral of the story, Tiger fans, is to keep your eccentricities off your vehicles. I have a very simple interlocking AU window cling on my back windshield. I do not have six flags, eight bumper stickers, magnets (except on gamedays) and shakers hanging from the trunk. That's not hyperbole, by the way. I saw that vehicle here a couple of weeks ago. Unfortunately, due to my pesky habit of trying to stay on the road instead of taking pictures of other cars while driving, I was unable to preserve the moment for posterity. Feel free to observe the "pics or it didn't happen" rule if you wish, but you know you totally believe me.

How many more times can I say "Chins up, Tiger fans," before it becomes trite? It already is? Tough. We are Auburn. Yes our football team is not playing very well at all right now and the coach that led them to a national championship less than two years ago will in all likelihood be tossed out the door to land on a cool $7.5 mil, but dammit, chins up! The reasons we love Auburn aren't dependent on football.

This week is Homecoming. I hope to see as many of you there as can make it. There's nothing lovelier than our loveliest village on the plains!

*Just being objective. If it were any other team but Bama, I'd probably enjoy watching them play. But it's Bama, and it makes me want to puke, so here we are.

**Just being objective again. I spend a lot of time here observing, like Jane Goodall.