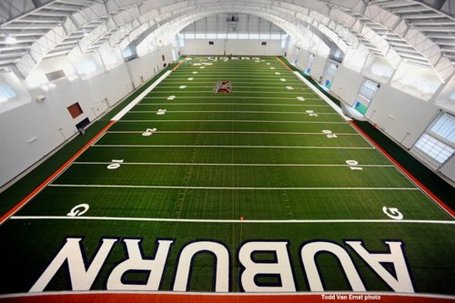 War Eagle everyone, once again we are proud to spend the day with you, bringing you all the latest in recruiting news.

The coffee is on, the doughnuts are fresh, and we are ready to welcome our new family members to Auburn.

Let's start by taking a look at those already enrolled, and attending classes.

This will be the way it's done, when the school systems can afford to.Times are changing slowly because of the increased financial burden placed on public schools. The NCAA is actually trying to keep pace with today's fast changing technology. In a story about the first ever electronic signature on a National Latter of Intent (NLI).

She's the test case for former National Letter of Intent director Eugene Byrd, who says the recruit will become the first college athlete to sign the NLI electronically.

The story is HERE.

I look for Auburn to finish strong today, with maybe a 5* recruit, and 3 or 4, 4* recruits, giving their pledge to play for the Tigers.

I also am looking for that surprise recruit that most never heard of. One of those like Tunde Fariyike, that nobody had on their radar, that will end up starting one day and be a major contributor. I just feel it, it's going to happen.

Jon Solomon describes what hurts the Tigers the most in past recruiting classes.

Give Gene Chizik credit for even handed justice. A violation of team rules is not an area to be trifled with. No matter if you are the best RB on the team, or someone that just signed your NLI. The rules are there for all to see. So are the examples of what happens when you think the rules do not apply to you.

Just how many recruits Auburn signs this class is hard to know in advance. My guess is that we sign 20 to 23, and use whatever we need to fill up again next year. Statistics show, that with new coordinators, you will lose some players from your current roster. How many, will be key going forward.

As always your comments are most welcome as we await word from Auburn Athletics about the new team members.