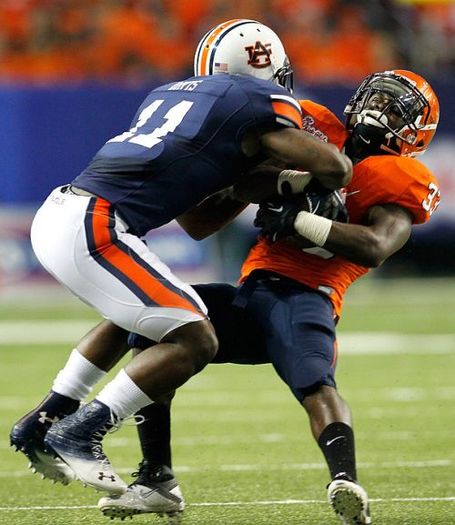 War Eagle, everybody! With Auburn's coaching staff now set, it's time to look at what players the Tigers have, and to who might be a factor next fall. There are questions on nearly every football team this time of year, but one has to like the collection of talent coach Gene Chizik and his staff have recruited. Many folks were disappointed in this year's recruiting class, but interestingly it became a class where one and two stars need not have applied! Classes like the last one are how a team builds quality depth. Today, we'll look at the players Auburn has for defensive coordinator Brian vanGorder and his newly rearranged staff to work with.

Each year, some players excel where no one expected them to. This year will be no exception. I can remember the spring of 2010, where we were pretty worried about Auburn's defensive line, especially when the oft-injured senior Zach Clayton was penciled in as a starter. Nick Fairley was a part-timer coming in. The only proven player was Mike Blanc, and he was regarded as so-so. Who would have foreseen a Lombardi Award for Fairley, and Clayton playing well enough to be drafted into the NFL?

Likewise, some players who are projected to be great don't pan out. Often, this is due to injuries. Aaron Savage is a great example. He showed lots of promise as a starting freshman safety. His sophomore year was a rash of injuries. His junior year he moved to corner, and suffered a season-ending knee injury. The next year, an Achilles injury sidelined him. He obtained a 6th year, and injuries claimed him again halfway through the season. The sad thing is that through those injuries, he lost a little bit of speed and maneuverability each time. Sometimes the mind is willing, the strength of character is there, but the flesh is not up to the task.

When a team gives up a school-record number of points in a season, the first place one looks for improvement is on the defensive line. I think Auburn will likely show a ton of improvement here in the months ahead. One must recall that we were playing all first and second year players in the middle, and the end rotation suffered a pretty serious number of season-ending injuries. All told, Auburn has about ten defensive linemen who return having had serious playing time already. I'd expect Kenneth Carter and Jeffery Whitaker to make a serious move as true juniors. With Gabe Wright and Angelo Blackson in the mix after being thrown out there as true freshmen, Auburn should have strength and depth in the middle. An end rotation of seniors Nosa Eguae and Dee Ford, juniors Corey Lemonier, and Craig Sanders, along with sophomores Justin Delaine and LaDarius Owens should be pretty scary on the pass rush, although I'd like so see at least one big run-stopping end developed. Devaunte Sigler could be that guy. I think opportunities on the line for newcomers will be limited this season.

There is little doubt that linebacker is the area of greatest concern on Auburn's 2012 team. Tommy Thigpen has been moved from safeties coach to linebacker coach, and that should be a pretty good move. The vast majority of Thigpen's experience has been with linebackers, and Auburn should benefit from his expertise. Returning starters are senior Darren Bates, junior Jake Holland, and senior Jonathan Evans. Only sophomore Jawara White has significant experience behind those three. Thigpen's mission will be to find 3 guys to start, plus build depth. Auburn does have some good recruits returning, but experience is in short supply. One difficulty this year is that vanGorder has gone on record stating that he prefers bigger linebackers. At the end of last season, Jonathan Evans and Jake Holland were barely 230 pounds. Will the Tigers attempt to bulk up the experienced guys? Or will there be a wholesale youth movement? A couple of guys to watch that haven't played much are sophomores Justin Garrett and Chris Landrum.

New secondary coach Willie Martinez inherits a unit boasting a significant amount of talent. Senior corner T'Sharvan Bell likely won't be ready for spring drills, but Auburn returns starters Chris Davis and Jonathan Mincy. Jermaine Whitehead played extensively, and Robinson Therezie, Ryan White and Jonathan Rose saw action last season. Safety is a little thinner, but still an area of strength. Both Demetruce McNeil and Ryan Smith saw plenty of minutes at strong safety. Neiko Thorpe will have to be replaced at free safety, but sophomore Erique Florence played last season, and has drawn rave reviews at times. Senior Ikeem Means has been around, too. Don't count out Trent Fisher, either. Injuries slowed him last season, but he had a strong fall camp. I'm hoping that under Martinez, the secondary will be more cohesive. Last few seasons, it seemed that Auburn's DB's weren't exactly sure of their assignments, or whether they'd have help or not on certain plays. It should help to have vanGorder overseeing things here as well.

The final note I'd like to make is that there seems to be a bit of a misconception of what a modern vanGorder defense looks like. I've seen a number of writers opine that Auburn will blitz more. I suspect that it will be less. Auburn blitzed frequently under Ted Roof. They just weren't terribly consistent at actually getting to the quarterback or runner. Darren Bates was second on the team with 8.5 tackles for a loss, from his strong side linebacker spot. Auburn produced only 22 sacks last season, but the back seven contributed 7.5 of those. Looking at Brian vanGorder's Atlanta Falcon defensive stats, the team was 12th in the league in total defense, but was only 19th in sacks, and 20th out of 32 teams in passing yards given up. Where the Falcons did better was stopping the run. The Falcons gave up 4.2 yards per carry, good for 6th place in the league. Under Ted Roof, Auburn gave up 4.6 yards per rush. VanGorder believes in pressure, and stopping the run. But you're not going to see Joe-Lee Dunn-style 9-man blitzes. I suspect we'll see very little difference, scheme-wise this year, compared to the past three. What we can expect is that the front seven will be much tougher at the point of attack. That's been the goal of Auburn defenses since the beginning, and I think Brian VanGorder is the man to instill that.