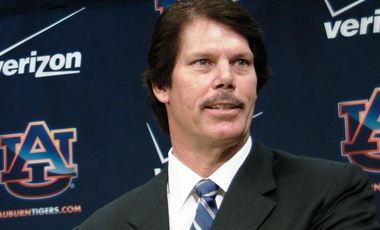 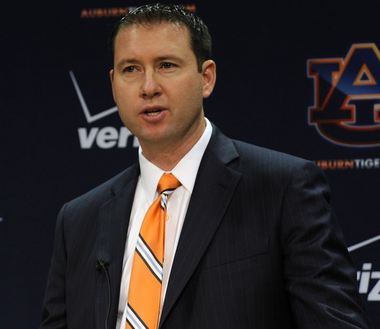 To tell you how happy I was just to type that, I was at a loss for words, initially. Never fear, I have recovered, and you my dear reader, will be the one that suffers through my giddiness.

There are tons of things for Auburn to accomplish when Spring practice starts. A starting quarterback, offensive line, linebackers, basically everything from A to Z.

Gene Chizik will be judged more on this season, and the two coordinator hires he made this offseason, than all of his previous three years here. It's that important to Auburn fans, fair or not. That's not saying he is on a hot seat or anything like that. My point is, the philosophical change that's apparent from a distance, must be a smooth transition, and be tailored to work with the incredible amount of talent that is on the Plains.

Former Auburn defensive coordinator Ted Roof was interviewed by pennlive.com contributor David Jones. In that interview, the time spent at Auburn was discussed in a rather brief way by Roof. Without actually telling us the readers his question, the author seen fit to include this statement by Coach Roof.

"I don't wanna get into that deal," said Roof when asked about the disconnect in philosophy with Chizik. "I just wanna kinda move forward and tell what I wanna do."

The fact that Coach Roof was not willing to throw anyone under the proverbial bus, speaks volumes about his time at Auburn, and his character.

The fact that Mr. Jones sole reasoning for Auburn's step back last season was the departure of Cam Newton, shows us that he did precious little fact checking. In case you want to read the article, it's here.

LSU defensive back coach Ron Cooper has been named "Defensive Back Coach of the Year" by FootballScoop.com. I lead this section with that because Mr. Cooper is heading to Tampa Bay in the NFL. Sorry Jonno.

Kicking our way into the future....

According to Charles Goldberg of al.com among other sources Auburn has received a commitment from a Kennesaw, GA, 2013 prospect Jimmy Hutchinson.

Jimmy Hutchinson from Kennesaw, Ga., said he'd sign with the Tigers next February. He's rated as the No. 1 punter in the nation by punting gurus Chris Sailer and Kohl Kicking Academy. He'd be a freshman when current punter Steven Clark is a senior.

Current AU punter Steven Clark was a finalist for the 2011 Ray Guy Award which is presented to the top punter in the nation annually. Another great season by Clark might just propel him into the NFL Draft a year early, so this is a must have for Chizik and Boulware, as they continue to produce very effective special team units.

Hutchinson is Auburn's 3rd commit for the '13 class.

In an article with the Columbus Ledger-Enquirer, and on his blog as an Auburn beat writer, Joel Erickson explored the issue.

"I don’t know how that’s going to pan out going forward, to be honest with you," Auburn coach Gene Chizik said on national signing day. "Certainly, if one school chooses to do it and another doesn’t, it creates some sort of advantage or disadvantage depending on which one you are."

You might want to favorite The War Eagle Extra, Joel is doing a fine job keeping up with Auburn athletics.

This weeks winner comes from actual knowledge and experience of an Auburn alum. The winner is AUphysics for the eye witness account of the subject on academic scholarships.

"I was lucky enough to receive a 4-year deal from AU back in ‘02. The stipulations on that deal were that I had to maintain a 3.0 throughout and maintain decent progress towards a degree (no schedule filled with underwater basket weaving). I was absolutely thrilled to get that as otherwise I would be paying my own way. As far as resentment towards athletes I don’t remember seeing that whatsoever. I had a friend who was offered the "super-deal" of tuition+room+food+book allowance all for academics, so it is not like such offers are not around. However, you have to look at it from an accounting sense: the school is betting that athletes will bring in more revenue than they are costing, which for football is definitely true on the aggregate. Likewise, the school is betting that by bringing in academics they will eventually donate back to the school and raise the school’s reputation. In the long term both typically work out for the institutions".

Auburn will hold a Junior Day event this Saturday and has invited more than 60 high school prospects, including at least 6 for the class of 2014. It would be unfair to list any of the already rated players, and not list the ones that have not been evaluated as of this writing, so we'll just say that it's a virtual who's who of talented prospects, as Auburn continues the pursuit of the best athletes in the country.

I will tell you that there are 3 QB's that will attend the Spring Junior Day event, and one of them hails from Los Angeles, California.

We are still a few weeks away from the start of spring practice, and much will be written over that time focusing on the "new" scheme AU will have on offense, or the expected rise of the defense to be "more dynamic". The underlying truth is, that for the most part Auburn will be much improved for a couple of reasons that have nothing whatsoever to do with the coordinator hires.

That is not to say that the record is guaranteed to be better, although with good fortune on the injury front, it should be. What's the biggest difference we will see next season? It is the absence of the 30+ point blowouts we experienced at the hands of our rivals. Also, we should be less prone to blowing those 14 point leads, as was the case in Clemson last season.

The second reason is the fact that on the two most important areas of the coaching staff, there were zero changes made. Jeff Grimes, and Mike Pelton will have to adjust slightly to the new coordinators, and their respective schemes, but the players won't have to adjust mentally to a new coach.

Every other position on defense will have a new mentor this season, not so for the line. Championships are won in the trenches, and Auburn will return one of the best groups of defensive linemen in the conference. Not having to learn what a new coach expects, and his terminology will be a huge plus for these guys.