Share All sharing options for: Who Will Pull the Trigger in 2012? 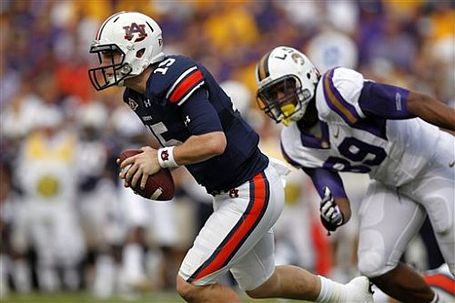 Auburn does best with a veteran under center.

War Eagle, everybody! It's time now to look forward at what sort of team Auburn might field this year. Today, we'll look at the quarterback position. It's the most important position on most football teams, and it's also an area of great questions this spring. Auburn will need to be balanced, and it's incumbent upon new offensive coordinator Scot Loeffler to tutor a quarterback who can pass efficiently and move the chains. We eagerly await the results!

Auburn has 3 major quarterback candidates on the roster at this time. Junior Clint Mosley was thrown into the fire last season and had a rough go of it. Before we write him off, one must look at the circumstances. Prior to last season, Mosley had been on the scout team. His only game experience was mop-up duty. He was asked to come in at the half of the Florida game, then got his first ever start against number one LSU's defense. That's kind of like sending a young boxer out for his first fight to face Muhammad Ali. Mosley also faced a top ten defense against Georgia, and the best defense in the nation in the Iron Bowl. He did this behind a makeshift, injury-plagued line. It's not terribly surprising that he didn't do well. Few quarterbacks would under those circumstances.

Sophomore Khiel Frazier was strictly a wildcat quarterback on the field. He was fairly impressive running the ball. He picked up decent yardage even when everyone in the stadium knew he was going to carry the ball. He was not successful on his very few pass attempts. True freshman quarterbacks in the SEC tend to have problems with missed reads, missed passes, and interceptions. That was true of Frazier last season, too.

True freshman Zeke Pike has enrolled this semester, and will take part in spring drills. This will give him a chance to start fresh with the new offense at the same time as the veterans. Having a true freshman quarterback starter in the SEC is not a recipe for great offensive success. The only two I can remember in the past 30 years whose team won 9 games were Eric Zeier and Matthew Stafford. There have been redshirt freshman success stories, including Danny Wuerful, Jay Barker, David Greene, Stan White and Aaron Murray. Still, asking a first-year man to win big in the SEC is a tall order.

How much correlation is there between winning percentage, and what class the starting quarterback at Auburn is? We'll look back 30 years, as that's about the time offensive linemen were first allowed to use their hands, and the modern passing game got its start. For purposes of this study, I'm only considering class, freshman, sophomore, junior, and senior. Whether a quarterback redshirts or not we're not going to worry about. Chances are, a redshirt year is going to be one toting a clipboard, either because of injury, or not being ready to contribute.

Disclaimer: everything on the list below prior to 1997 is done strictly off memory, as Auburn's official site web history ends there. I hope I'm at least somewhat accurate! I remember Auburn rotating quarterbacks in 1985, with Walden, Burger and Washington all playing. I "think" Walden got all three starts, including the 38-20 blow-out loss in Knoxville that caused Dye and Crowe to start Washington the rest of the way. Likewise, my memory of the two Burger suspensions is hazy. I think the 1987 one was a fishing trip that had to be investigated before he was cleared and returned to action. Also, if a quarterback started the game, he gets the credit. It would be too complicated to figure out saves and all that like a baseball game!

1986 Reggie Slack 1-0. (Slack started the Mississippi State game, and played just the first snap, due to an issue with regular starter Jeff Burger.)

As you can see, Auburn's chances with an upperclassman under center are pretty good. With someone younger, Auburn barely finishes over .500, and usually has a losing league record. Of course, this does not mean Clint Mosley should be automatically handed the job. When a younger quarterback starts ahead of a veteran, it usually means the coaches think the younger man gives the team the best chance to win. That's why Mosley started the last 6 games of 2011. I did not see the logic in the move. To me, it's crazy (and maybe cruel!) to give a player his first start against #1 LSU in Baton Rouge. All I can figure is that there was some situation, injury or otherwise with Barrett Trotter that influenced the coaches' decision.

It's going to be an interesting spring in Auburn. I can't wait to start hearing some quarterback numbers from practice, and to watch these guys on A-Day. We can only hope Scot Loeffler works the kind of wizardry he managed in the 2000s at Michigan.