Friday Ramblings Kicks Off Your Weekend

Share All sharing options for: Friday Ramblings Kicks Off Your Weekend

Get ready now, for it's only 146 days until the first kick off of the new college football season. Speaking of kickoff, I noticed Auburn has one of the top Kickers in the country rating AU as his favorite. We already have a solid verbal from the #1 rated punter in the land, so it's fine with me if we keep up the stellar play in that area. Seems coach Jay Boulware is serious about special teams forces.

LSU wasn't the only school to hold a tryout for a female kicker this spring. According to reports from the Washington Post, Lauren Luttrell tried on at least two occasions to make the Virginia Tech football team.

Luttrell made her first four attempts off a tee to make it through the first round of the competition along with six others, but missed a 35-yard field goal from the left hash in the next round that ultimately eliminated her from contention.

And though Luttrell didn’t quite make the cut, she is not giving up on this dream. She plans to meet with Ballein and Beamer on Monday in hopes of figuring out a way to continue training in a more structured environment, and perhaps try out again next season.

We want to wish Ms. Luttrell the best of luck going forward.

I think it's a disease, or something like one.

No, I am not talking about Bobby( insert IDIOT here) Petrino, and his self made disaster. I'm referring to the chance that Augusta Country Club had to possibly move it's centuries old thought process into a more modern, and more intelligent decision making apparatus.

What bothers me is that there has been a precedent set that the IBM CEO would get an automatic invitation into the storied Augusta Country Club. I know that if I were a member of the IBM policy and decisions board, there would be no way IBM could be a sponsor of the Masters Tournament ever again.

Yesterday we found out that Arkansas Razorback coach Bobby Petrino had not been entirely honest in his original press conference immediately following his motorcycle accident. It seems the police report contains the information that someone else was with Petrino at the time of the accident. That someone happens to a woman that he is having an affair with, that he also hired into the football program. The woman's name is Jennifer Dorrell, and she is reportedly engaged to be married to another man.

At 9:45 pm Central time last night, University of Arkansas Athletic Director Jeff Long held a press conference announcing that Bobby Petrino has been put on PAID Administrative leave until a full determination and review can be accomplished. Coach Petrino will not be permitted perform the duties of his position. Assistant Coach Taver Johnson will assume the duties of the Head Coaching position until the completion of this review.

Seems the Liberty Bowl is getting a facelift. The 9 million dollar renovation will include a 2.5 million dollar video board paid for by Fed-Ex. I hope it looks good thru the screen of my television.

Perhaps I was distracted by the ">video. I was so impressed with the quality of the runs, and that wonderful track laid down, that Ladarious Phillips instantly became a favorite of mine. Whatever the reason, Phillips has decided to end his Auburn career, and transfer to Jacksonville State. Phillips apparently is leaving on good terms, and has nothing but good things to say about his time at Auburn.

He said his decision to leave Auburn came down to playing time, and he plans to transfer to JSU.

"I really enjoyed it. You can’t get no better than Auburn, D-I (Division I)," he said. "I just felt like I needed to transfer to go somewhere and get some playing time."

T'Sharvan Bell stated during an interview earlier this week, that he has "no doubt" that he will be ready for 2-A-Days this August. I for one, am hoping that he does not rush his return. He is an integral part of the leadership on Auburn's defense. Bell has a great attitude, and an incredible work ethic, plus he passes out compliments when they are deserving. Not to mention that he is a really good player, that has a chance to be something special on defense.

Thanks to The War Eagle Reader and @thejuiceisgood for the following picture. 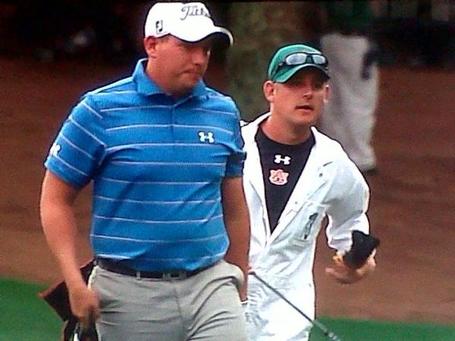 I sure hope the Masters host course Augusta National, gets the archaic policy of no women members, tossed. I have always enjoyed the tournament.