Share All sharing options for: Memphis Blues for Robinson? 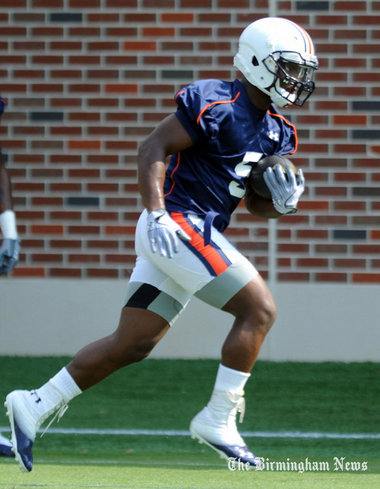 Will we get to see Jovon Robinson in Auburn's backfield this year?

Unless you've been under a rock for the last couple of hours, you have probably heard about Jovon Robinson and his potential high school transcript problems at Wooddale High School in Memphis. The Commercial Appeal in Memphis broke the story.

There were also some serious allegations being thrown around on the Paul Finebaum show today (But how is this different from any other day?) from the man who broke the story about the car that Robinson has been driving since January.

What we and all Auburn fans are worried about is what it means for Auburn and the 2012 football season. There are two ways to look at it:

Bama Fan Approach: "The Barn is burning, PAWWWWLLL. It was only a matter of time before they got caught paying all those players and giving them cars! DEATH PENALTY!! Roll Tide!"

The truth probably lies somewhere in the middle, as it always does.

Auburn would obviously be in deep trouble if there was a connection between Auburn and transcript falsification to get a player eligible. If this proves true, go ahead and buy the good stuff at the ABC store. We'll need it.

It could turn out to be that Robinson knew about it but Auburn didn't. In that case, we lose Robinson at least for a year and maybe for good. He may go the JUCO route to regain eligibility.

But that is all speculation. All we know currently is that it is being reported that Robinson was held out of Friday's practices to "review his academic status."

As it stands right now, the only thing that hurts Auburn is that an RB has been taken off the depth chart. That leaves Onterio McCalebb, Tre Mason, Corey Grant and Mike Blakely to carry the rock.

All we can do is sit back and wait. If Rich McGlynn and the Auburn Compliance department do as they have in the past, then they will be very thorough and will not take a chance on playing Robinson if they think it could come back and haunt them down the road.

We'll just have to wait and see.