Share All sharing options for: Recruiting Update: 2013 Big Board 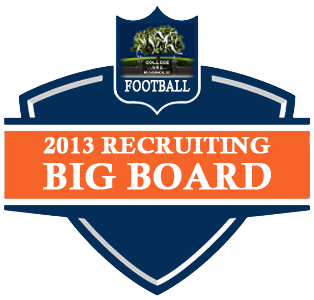 It's early August. The summer camps have ended, 7-on-7 tournaments have come to a close, and fall practice is getting kicked off. High school seniors will be starting their final season as the big fish in a little pond soon. Seems like a good time to update our big board.

Several things have changed since we last updated the Big Board. Auburn went on a little bit of a commitment spree, adding three to the Commit List. You may have heard something about them. One, a five-star linebacker, flipped from that team across the state in quite the trolltastic fashion. Another is a 4-star running back that fills Auburn's need for a big back. The other is an instate four-star athlete who is being recruited as a quarterback.

That brings Auburn's commitment number up to 17, highlighted by three Rivals five-stars on the defensive side of the ball.

Let's take a look at how it how this class is stacking up and what Auburn still needs.

QB: 2 needed/2 committed -- With young talent already at the quarterback position, Auburn won't be looking to sign anyone other than the currently committed Jeremy Johnson and Jason Smith.

RB: 1/2 -- The Tigers have a quality big back in Jordan Wilkins and would like to add one more ball-carrier to the class -- likely Greg Bryant Jr. or Derrick Green.

WR: 1/2 -- Auburn has a commitment from their top target and would like to add one more receiver to this class.

TE: 1/1 -- There has been plenty of talk that OJ Howard could become the second Alabama commit to flip to Auburn. He's the only TE Auburn would sign in addition to Arshad Jackson.

OL: 0/1 -- Auburn has pulled in an astonishing haul of quality O-linemen over the last two recruiting cycles, but adding another blue-chipper is never a bad thing.

DL: 3/4 -- The Tigers would love to add one more to their impressive defensive line haul.

DB: 3/4 -- The Tigers would like to add a top safety prospect to the class.

ST: 2/2 -- AU is done recruiting kickers with two of the best in the country committed.

The list of names to watch hasn't changed much. However, there has been some interesting movement in the interest level of a few prospects.

Auburn is in good shape with big Montravious Adams. He visited the Plains again recently, and by all accounts, the visit went very well. Adams has bonded with Foster, who seems to have become one of Auburn's biggest recruiters, along with Lawson and Liner. Adams will play in the Under Armour All-American game with a number of Auburn commits, including Foster, Liner, Lawson, Trey Johnson, and Earnest Robinson, and you can bet they'll be in his ear. Don't expect a decision from Adams at least until the Under Armour game, if not signing day.

The next thing you might notice is that the Tigers are squarely in the mix for two of the top running backs in the country, Greg Bryant Jr., who recently de-committed from Oklahoma, and Derrick Green. There was a lot of buzz that Bryant could flip to AU, but he decided to slow things down after de-committing. Green recently visited Auburn and left very high on the Tigers. He is also very high on Michigan following his recent visit to Ann Arbor. The past few days have been full of rumors that one or the other would be making a decision soon. If this is true, Auburn will take whichever one decides to jump on board first.

The recruitment of Georgia commit Tray Matthews should be watched very closely. Matthews recently visited Auburn again, this time bringing his father, the rest of his family, and his girlfriend. He and Foster are very close, and it's safe to say Reuben is in his ear about flipping. Matthews has said he'd like to have a final decision made before the season starts. He also plans to be an early enrollee.

One thing to keep in mind is that Auburn, already with 17 commitments on board, only has five, maybe six, open spots remaining for this recruiting class. The Tigers have the luxury of being highly selective on who fills those last few coveted spots. Numbers are tight, and recruits know it. It might make a couple of guys push up their timetables and commit sooner rather than later. Think back to the last time Auburn had this many commitments before the season started. Can you remember? No? That's because they've never had this many on board this early before.

This time of year, many uncommitted recruits are narrowing down their list of schools prior to their senior seasons getting under way. Some will go ahead and commit in the next couple of weeks in order to have it out of the way before they need to focus on playing. New names will undoubtedly pop up on the radar over the next few months. Could the Tigers add another commit before the start of the season? The LSU game on Sept. 22 will likely be the next big recruiting weekend for the Auburn. Needless to say, it will be interesting to see how Auburn closes out the 2013 class.