Being blessed -- some might say cursed -- as a Radio/Television/Film major, I have hard time NOT relating things to pop culture or finding their pop culture equivalents so I can easily explain them to outsiders. College football is no different. Sometimes, people need to find another avenue to relate to a certain game. They need it broken down a different way. Here are five games I'm watching this week and their pop culture doppelgangers. 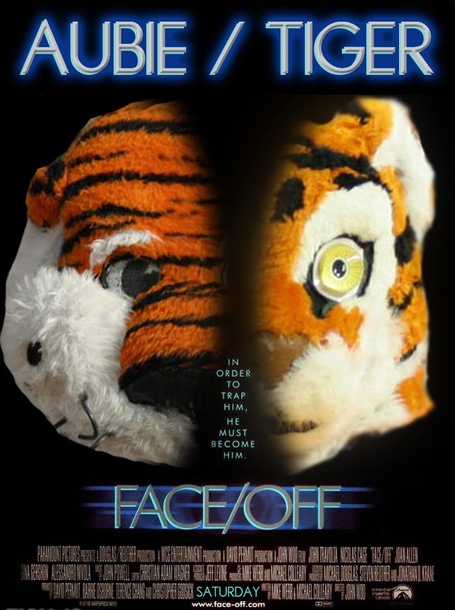 This has been rummaging around in my brain for some time. Auburn is John Travolta. Clemson is Nicolas Cage. It's not that complicated.

Let's delve more into the Travolta is Auburn theory. Auburn is a school that most fans agree is clean. However, lately it has been plagued by allegations and rumors. John Travolta is an actor who most fans agree is clean but lately has had rumors and innuendos sprout up. People claiming they have "secret tapes" and "alleged reports". Auburn is a football team that took a bit of a decline after a solid run at the top. Same with Travolta's career. Then things picked up in the late '90s/early 2000s. There was a dream performance that was loved by 90% of the populace but never got the ultimate prize. For Auburn, it was the 2004 season that still didn't bring home a national championship. For Travolta? It was his turn in Pulp Fiction that still didn't win a Best Actor Oscar. Auburn is a team that has had an identity crisis offensively. The Tigers have had to change from wishbone to power running to pseudo spread to pro style to air raid to run first spread and now are an amalgam of all of these things. Travolta has moved from TV actor to movie of the week actor to dancer to singer to respected actor and now sits as a melting pot of all his skills.

Clemson is Nicolas Cage, operating on its own little sphere, a bit crazy, a big unhinged. It can put on nuanced and deliberate performances that critics adore, but you know that ultimately it is likely to put on a dumpster fire and that's what the Tigers will be remembered for. For every Leaving Las Vegas (Clemson winning the ACC) there's a Wicker Man (The Orange Bowl). You never know what you are going to expect. You just know that both will always be there.

In Face/Off, Travolta is Cage. Cage is Travolta. How did Clemson first beat Auburn? By becoming Auburn offensively. How did Cage beat Travolta? By becoming Travolta. Just like Face/Off, that win is only going to be temporary. Auburn(Travolta) has realized that it needs to be different than it was. Now that Auburn has moved away from that full spread that Clemson used to destroy it last year, it has to become deadlier and Clemson will still be trying to deal with the side effects. The gassed defenses. The multiple three-and-outs. Auburn is ready. The Tigers have learned what beat them before.

Also, Tajh Boyd is the college football equivalent of a butterfly knife -- deadly and accurate. However, it's kind of awkward and if you don't know what you are doing you will end up stabbing yourself or running an offensively play like this:

I don't envy Nick Florence. Baylor's new starting QB will always be compared to his predecessor and probably unfairly judged because of what a genre-defining talent was able to do just a year before. Nick Florence is Andy Bernard now. He'll try to make his own name and try to keep the good work from the previous years going. Maybe he'll actually be able to define his own little niche. Still, the void left by our Steve Carrell/Robert Griffin III hyperbolic monster is a massive one. SC/RGIII have both moved on to take more serious roles that to most viewers seem like they are just excerpts in futility. However, while Steve Carrell is now making movies like Seeking a Friend for the End of the World, RGIII's melancholy nightmare is only beginning as the starting QB for the Washington Redskins. Here's what Baylor fans are hoping to say to Nick Florence after this season:

This theory is a bit complicated but, to me, it holds up. First, for the mythology, you have to agree to one thing. Tommy Tuberville is (was) Gus Fring. Keep that in mind.

Alabama vs Michigan is the game this weekend that everyone will tell you to watch. More words and blog posts and preview/review videos will be made about this game then any other game this weekend.

Breaking Bad is the TV show that everyone tells you to watch. More words/blog posts/etc will me made about this weekend's episode than anything else on TV.

So, we have Breaking Bad -- and if you haven't seen the show here's your spoiler alert -- and we have someone who has built an empire. Gus Fring is king. Tommy Tuberville was Gus Fring. He had built is own little empire at Auburn. He was at the top of the world. Then, he got lazy. He allowed someone unexpected to slowly undermine and build his own empire. Gus Fring had Walter White. Tommy Tuberville had Nick Saban. Now? Nick Saban is in charge and he's not letting go unless he personally implodes. So far, that's not happening. The 2008 Iron Bowl was Walter White and Gus Fring at the Nursing Home. All that was left were ashes and a new ruler.

On a personal/tv fan note I'm not going to watch the "Cowboy Classic" -- or whatever they're calling Michigan/Alabama for Nick Saban and Alabama. Just like I really wasn't watching Breaking Bad for Walter White. No, I identified with a minor character. They were why I tuned it. A character connected to both groups. Al Borges is my Mike (the Cleaner) Ehrmantraut. Both are fixers. Both are underestimated. Both are dry and somewhat calculated. Sadly (SPOILER ALERT) I'm worried that Al Borges will suffer the same fate (albeit in a football sense) as Mike. Unnecessarily left for dead by a river, completely by accident, just a casualty of war.

Also, A.J. McCarron is Sklyer White. You know she's integral to the story but you are already waiting for her to leave.

So beautiful. So fragile.

Let's face it, there's nothing flashy about Wisconsin. Some may even call their offense "boring," "predictable" and "bland". Much like any Megan Fox film performance. That's not to say it's not enjoyable. In fact, sometimes, it's exactly what you need. I'm guilty of it myself, both with my strange devotion to watching Wisconsin trample a hapless opponent and watching a Megan Fox movie. You do do feel a secret sense of shame when watching both. I saw Jonah Hex in theaters. I own Jennifer's Body on DVD. I've gotten giddily excited to watch an early Wisconsin game called by Pam Ward, and in all of these instances I've had the same feeling and reaction: guilty pleasure. I really shouldn't enjoy watching Wisconsin steamroll and plod down the field. Yet, I do. I really shouldn't enjoy Megan Fox steamroll and plod through her scenes in Transformers. Yet, I do. Bucky Badger is my football Mikaela Banes. 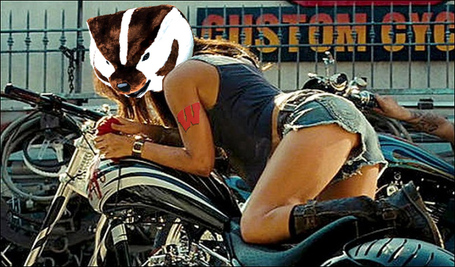 Stunning. Michael Bay, you know what you're doing, man.

Complicated mythology that can be equally daunting and easy to grasp fundamentally? Welcome to the Dr Who universe and watching Georgia Tech run the triple option.

You recognize both as modern but there's also something inherently retro about them. Fandom feels like this secret club. If you enjoy it you really want to share it but it's hard for outsiders to truly grasp and appreciate just what exactly you're so passionate about. Devotees can talk for hours about the beautiful simplicity but also the long and storied history and evolution that brought us up to this point. Sadly, there's not a good starting point to get people interested. Telling people to watch GT run the option and turning on this game? As Virgina Tech makes it look like someone brought a knife to a gun fight? It's akin to getting new viewers to Dr Who by only showing them "Amy's Choice" from Series 5 (2010).

With that, I bid adieu. Enjoy the games this weekend. I'll also be watching the Braves choke away the NL Wild Card.