Share All sharing options for: Taking a Look at ULM's 3-3-5 Defense

Auburn is 2-0 after toughing out wins over Clemson and conference foe Mississippi State. The Tigers are now heading into a game versus Louisiana-Monroe that should provide some rest before hosting LSU. Wait ... what? That's not right? Oh, I guess things haven't gone exactly to plan for Auburn the first couple of weeks.

Go ahead and scrap those plans to take it easy this week versus LaMo. Turns out, they aren't the pushover we had hoped they might be, as evidenced by the Warhawks beating Arkansas last week. They didn't just luck into a win, they physically beat the Razorbacks. On defense, they used an attacking version of the rarely-seen 3-3-5 to keep Arkansas' offense out of sync and off balance.

What makes the 3-3-5 work? What unique challenges does Auburn face in game-planning for ULM? To say the Tigers' offense is struggling early in the season is a bit of an understatement. What can Auburn do to exploit the "30 stack" defense?

Chris Brown is the author of The Essential Smart Football, an excellent book detailing some of football's key strategies and ideas. In his book, Chris explains the basics of the 3-3-5.

An excerpt from the book was republished on Grantland. It chronicles how the 3-3-5 was born and adapted as a variation of the 3-4 defense that many college and NFL teams utilize. The full article on Grantland can be found here. What makes the 3-3-5 different from the 3-4 are the gap assignments.

The traditional 3-4 is a two-gap defense, which means that the defensive linemen typically line up "heads up" on the offensive linemen and are responsible for the gaps to either side. This leaves the linebackers free to roam. In the 3-3-5, there are more stunts, and usually at least one linebacker is rushing. This means each player ends up responsible for one specific gap, though the player's specific responsibility will change from play to play. The 3-3-5 is designed to make both pass protection and run schemes (particularly zone-blocking schemes that heavily rely on double-team blocks) difficult to the point of futility. The linebackers have varying assignments, from blitz to coverage, but they are still responsible for gaps.

So, now that we know what the 3-3-5 is, how is Auburn going to gameplan their offense against it?

This has been a struggle so far this season. The indecisiveness and lack of confidence shown by Kiehl Frazier in the Mississippi State game won't scare the Warhawks. They won't respect his ability to throw the ball and are likely to put eight men in the box to stop the run, daring Frazier to beat them with his arm. Can he? I think so -- if he settles down. He showed against Clemson that he could make the right reads; he just has to play within himself and set his feet. Pre-snap reads will be important for Frazier to read and react to where the pressure is coming from. The backs will have to help in blitz pickup and pass protection. Auburn should be able to exploit a mismatch when Philip Lutzenkirchen is matched up on a linebacker, or when a safety is lined up on a receiver like Quan Bray. It will be on those receivers to find a hole in the zone and on Frazier to get them the ball. LaMo has athletes on the back end and was able to limit Arkansas to 281 yards on 17 of 40 passing. Granted, that was with Tyler Wilson in the locker room the entire second half.

Ok, some of you may be thinking that with three down linemen and three linebackers, it should be easy to establish the running game. Offensive linemen getting to the second level and blocking linebackers should open holes for Tre Mason and Mike Blakely. I hope that proves to be the case. However, considering that ULM held Arkansas to 96 net yards on 26 attempts, it might prove to be a little more difficult. We can expect ULM to walk their safeties down and stack the box. Defensive linemen and linebackers will attack the gaps while the safeties are free to play the edges. Auburn will have to be solid in their assignments and be physical in the trenches. If Auburn sticks to the power run game with a tight end and fullback Jay Prosch leading blocking, holes should open up and allow Auburn's backs pick up yards. Hopefully, Frazier can have enough success passing to soften up the defense and allow the running game to do its part.

If you watched the ULM/Arkansas game last week, you noticed that the Warhawks were consistently getting pressure on Wilson -- to the point where they eventually knocked him out of the game completely. How did they manage to get that much pressure? By disguising blitzes. Just because the Warhawks have three down linemen doesn't mean they're only going to rush three. Expect to see at least one linebacker rushing on almost every play. The ULM defense will run stunts and twists to try and free up a rusher in the gaps to get pressure on Frazier and stop the running game. This diagram shows a example of a blitz package out of a 30 stack alignment: 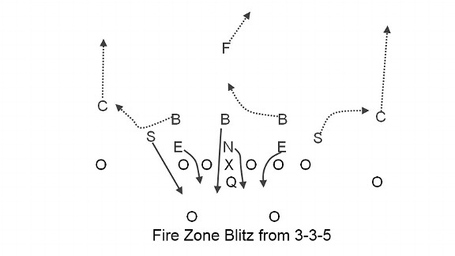 via Chris Brown
Here, you see a situation where the defense has eight in the box. The three down linemen attack the gaps while the Mike linebacker and a safety try to blitz into the backfield. The remaining defenders drop into a Cover 1 zone. If you were Scot Loeffler, how would you attack this particular blitz package? One way would be to run to the opposite side of the blitzing safety. Quick slants by the outside receivers should also open them up. Another option would be a streak or curl from the tight end into a soft spot in the zone. The onus is the defense to make the right calls at the right time. Bring pressure from the wrong place and it will leave an open hole in the zone.
This is a defensive scheme that Auburn won't see often, which makes it all the more difficult to gameplan for. Louisiana-Monroe has experience playing against SEC teams and a history of pulling off an upset now and then. The Warhawks will come into Jordan-Hare extremely confident, and they certainly won't be afraid of a struggling Auburn team. ULM has had a knack for causing turnovers and getting pressure on the quarterback under defensive coordinator Troy Reffett. The Tigers will need to play physically and win the battle in the trenches. Ball security will be crucial. Who will have the better gameplan? Will Loeffler outsmart Reffett? We'll see on Saturday.