We are roughly 140 days from National Signing Day for the 2013 recruiting class. Teams are starting to get into the meat of their season schedules and recruits are beginning to take official visits. Seems like a good time to talk recruiting -- specifically, team needs.

So, what are Auburn's minimum recruiting needs for the class of 2013? Remember, these are just the minimum needs. The rest is up to the discretion of the coaches -- well, it's all up to their discretion, actually. Things like quality of talent in a given year as compared to the following year are considered by the coaches and are often the explanation for taking more than the needed minimum. In other words, the talent pool for a specific position may be deeper one year as opposed to the next. A team's minimum needs may need to be filled the year after a talent-rich class. That doesn't mean the coaches pass on the talent because their roster doesn't have an immediate need. Rather, they may look ahead and fill needs a year early.

This page will be dynamic to reflect changes in the plan, including position switches (e.g. Robenson Therezie's move from cornerback to running back). Please remember that this is purely estimation and will become more accurate as the season progresses and likely attrition is determined.

Attrition consists of, but is not limited to: early departures for the NFL, academic misfortune, transferring to another school for more playing time, career-ending injuries, disciplinary departures and players electing to end their eligibility to go pro in something other than sports (Hey, Barrett Trotter). Obviously, some of these situations are difficult to predict.

Now that we've discussed the caveats, let's take a look at each position, the need associated, and how the 2013 recruiting class is progressing towards filling those needs. 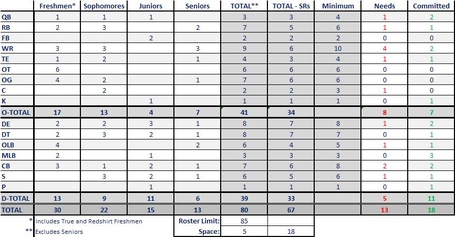 Quarterback: Auburn could return three scholarship quarterbacks in 2013. We don't anticipate Clint Mosely leaving, but it is a possibility. Therefore, taking a quarterback is definitely a need and a priority. Most schools prefer to carry three or four QBs on scholarship. Auburn currently has two quarterbacks committed for the 2013 class, filling the need. We wouldn't expect Auburn to take another QB unless further attrition occurs.

Skill (RB/WR/TE): The minimum here is generally considered to be 20. Auburn expects to return 16 skill position players barring further attrition. Thus, a minimum of five skill recruits should be brought in. But within this, a look at specific positions is also needed. Offensive coordinator Scot Loeffler wants to employ a power running game. Therefore, Auburn needs to have at least six runningbacks/fullbacks on scholarship. Loeffler also likes to run multiple tight end sets, so four tight ends are a reasonable requirement. For most pro-style offenses, ten receivers are typical. Auburn currently has three offensive skill players committed, four if you count the likelihood of re-signing JaQuay Williams. Auburn is very much in the mix to add a second running back to the 2013 class, and you have to believe the coaches wouldn't mind adding another receiver.

Offensive Line: Under most circumstances, 15 is the minimum here. Auburn is very young along the O-line after a massive haul in the 2012 recruiting class and looks to return 14. Whether or not the Tigers see attrition here is yet to be determined. Thus, offensive line is not a major need for the Tigers. It's also important to take note that offensive line coach Jeff Grimes likes to cross-train his linemen in order to get the five best on the field. Interior linemen can play guard or center, while athletic tackles can also slide inside to guard and vice versa if needed. This makes breaking down the specific position needs a little trickier. The 2012 class was heavy on offensive tackles, so Auburn would most likely want to add an interior line prospect to the current class. The Tigers can afford to be picky, and not signing a lineman wouldn't be the end of the world, but it would make it a priority next year.

Defensive Line: Just like on the O-line, 15 is typically the minimum in a 4-3 defense, evenly distributed between ends and tackles. Auburn looks to return 14 defensive linemen, but with a couple of potential NFL prospects, like Corey Lemonier, attrition should be expected. It's also worth noting that defensive line coach Mike Pelton likes to play a heavy rotation. This would mean that Auburn would prefer to carry more defensive linemen than the typical minimum. Defensive line play is part of what sets the SEC apart from other conferences, so this is a key area of focus. Looking ahead, with the defensive end position heavy on juniors and the 2013 class fairly deep on D-line talent, Auburn will bring in more than the minimum needed here. Technically, Auburn only needs to bring in one defensive lineman. However, the Tigers have three already committed and are very much in the mix to add another top defensive tackle.

Linebacker: The minimum here is generally eight in a 4-3 defense. Auburn will technically return seven linebackers, and attrition of one or two is possible. The Tigers have experimented with one of the linebackers moving to fullback to fill a need there, meaning the minimum here would bump up to three. Auburn has its bases covered at linebacker with four players currently committed for the 2013 class.

Defensive Back: A minimum of 14 defensive backs is typically desired, and Auburn looks to return 11. Therefore, Auburn will need to bring in a minimum of three defensive backs. The Tigers currently have three committed for the 2013 class and are heavily pursuing another safety prospect.

Special Teams: You generally want to have a kicker and punter on scholarship. Games are won and lost with the kicking game, so these positions have become increasingly more valuable. This is not an immediate need at the moment; however, with both of Auburn's current special teamers being juniors the Tigers have dipped into a deep 2013 talent pool and secured commitments from two of the nation's best.

Keep in mind that the coaches must also take into account the available scholarships and the 85-man roster limit. For Auburn, a small senior class could possibly limit the number of signees the Tigers can bring in with the 2013 class. Attrition could certainly occur and allow Auburn to bring in closer to a full class.