Whether it's lucky underwear or the correct amount of shaker shakes, superstitious behavior could mean the difference between a win and a loss.

Feeling a little Stevie Wonder right now. So whose 13-month-old baby broke the looking glass? Because we really seem to be having a string of bad luck. But we as fans can't do anything about that, right? Psh. Wrong.

One of the hallmarks of great irrational football fans like myself is our penchant for taking on responsibility for our team in an intangible way: superstition. Whether it's a certain shirt, shaker, or position, fans feel a closer connection with our team when we think our actions matter. Do they? I mean, I'm 99.99999999 percent sure they don't. But what if they do? I’m superstitious just in case.

My superstitions have evolved over the past 25 or so years. The list has grown from a catalog of mostly do's to include a huge collection of ABSOLUTELY DO NOT's. Excellent example: Roasting a pig for Arkansas*. Sounds great, right? On paper, it's hilarious and delicious. In practice, it was an 11 a.m. butt-kicking with an outrageous amount pork to remind us who did it. I have certain sweatshirts that will never be worn to games again**, and a whole pack of tiger eye face tattoos found its way to the trash***.

Some superstitions evolve as the game goes on. If I cheer a certain way and the offense does well, you better believe I'll be using that cheer until its luck wears off. Several of us watching the game together will determine the most effective arrangement of our persons, judging by how the team does relative to where we're sitting. If it's been a rough half, new seats! If someone leaves the room (usually me) and something amazing happens, that person is exiled until her absence no longer affects the game. Luck is a fickle thing. You never know when it’s going to change.

I told you this was irrational. But I don't know what to do with myself when I watch a football game. Ideally, I'd love to suit up and hit someone. I don't think there's anything sexier than a blind side sack. Unfortunately, I'm not physically capable of making plays myself. I'm a little too short, a little too weak, and a lot too slow. Also I'm not currently enrolled at Auburn nor have I ever played any football outside of Key Club/Anchor Club Powder Puff football at Opelika High School. So what's a girl to do? Make up rules to distract myself.

No hogs ever. Only undefeated shirts for SEC games. Sunglasses on for first downs, off for second, and in my hand for third. 10 shaker shakes plus two "Come on Auburn's" before a goal line stand. No, 11 shaker shakes and three "Come on Auburn's". The team will absolutely fall apart if I don't wear my lucky Auburn underwear. Nevermind the fact that the team has been working insanely hard for months, learning plays and Yoxercising. It’s all about my underwear.

What are some of your superstitions? Do you have a gameday uniform or pregame ritual? Are you superstitious for every sport? I may have small idiosyncrasies for other sports, but the majority of my psychosis is focused on Auburn football.

I decided to go superstition-free on Saturday. I traded in my eccentricities for the standard twelfth man duties. Standing in the student section**** of Jordan-Hare as Auburn was trailing LSU 12-10, I screamed until I was hoarse (I would never ask anything of y’all that I’m not willing to do myself). I screamed for a defense that played with the fire and intensity that we all knew they were capable of. I screamed for the good and I screamed for the bad. Sure, JHS has been louder, much louder. The guys heard us, though. They knew we were behind them, that we believed in them. But sometimes you just come up short. While the defense played lights-out, other parts of the team struggled. I felt helpless. I wondered later if lucky underwear or a certain cheer would’ve helped. Who knows? Maybe it would have. But I’m damned proud of those guys, regardless. I’m not one of those people who thinks losing close games hurts worse than getting blown out. Any loss is tough, but getting blown out is a bottomless pit of despair. Close games give you something to take away. Saturday night was a preview of the Auburn defense to come, and I'm pretty excited about it.

Enjoy the bye week, Tiger fans. I’ll be sure to snap a few pictures of some great Bama merchandise like this gem: 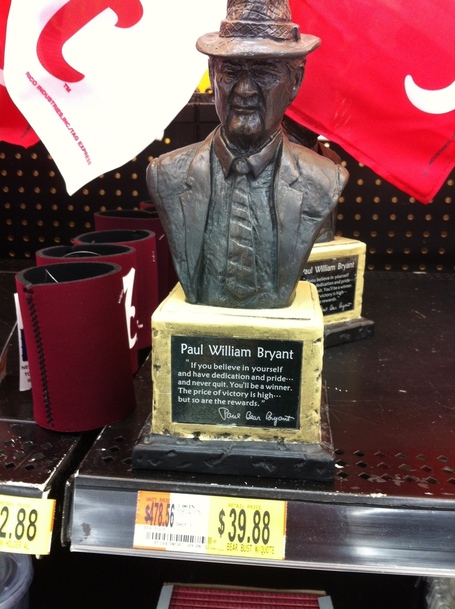 For just shy of $40, you too can have this handsome bust of Bear Bryant/Freddie Krueger with an inspirational quote. Let's take a closer look at that quote, shall we? 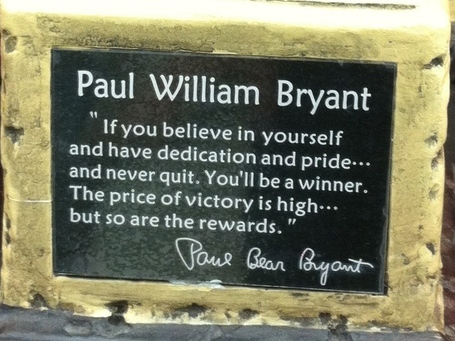 Pretty inspirational stuff. I like the fragment that ends with a period and the vertically centered ellipses. The price of Bama merchandise is high but so are the rewards. For me. Like giggling.

****Don’t judge. I’m far too obnoxious for those in the "regular people seats" to have to deal with. At least in the student section I can stand up and yell without cranky people telling me to get off their lawns.