Okay, I have a confession:

I may have gotten a little misty-eyed after Saturday’s loss to Clemson. Actually, by the time the clock hit 00:00, I was mostly numb. But when Auburn started its last possession, still with a chance to tie the game, I got a touch of what my mother calls "heart mist." And it wasn’t just because Auburn was probably going to lose.

Behind us at the Georgia Dome sat three generations of Auburn fans: a grandfather, his son, and his grandchildren, a girl of about eight and a boy of about four. Throughout the entire game, in between my episodes of screaming for flashes of defensive improvement, I heard both the grandfather and the father patiently explaining small details of the game to both kids.

"Watch the kickoff," the grandfather said. "If it goes through the back of the end zone, that’s called a touchback. They’ll bring the ball out to the 25, and we’ll start from there."

Instead of ignoring their grandfather’s commentary, these young children actually listened and asked questions. It reminded me of my daddy teaching me the ins and outs of football. I was an only child and a girl. If my daddy wanted to talk about sports with me, he had to teach me something about them himself. And I’ve always been grateful for his tutelage. It not only strengthened our bond as father and daughter but also laid a foundation for my love of Auburn sports. To this day, we exchange almost daily texts or emails about Auburn. I wouldn't have it any other way.

So as Auburn took possession with the clock winding down and its hopes of besting Clemson in the season opener waning, this little red-headed boy dressed in a tiny number 12 Auburn jersey started yelling for the first time all night.

I know he felt those words as he was saying them because I felt them in my bones. While some Auburn fans were filing out of the Dome to beat the traffic, this kid, spurred on by generations of Auburn men before him, was giving the team everything he had. He wasn't giving up on Auburn.

It made me yell a little louder, hold my head a little higher, and hope a little harder. In the end, our Tigers could not defeat the Clemson Tigers; the task was just too great. But I hope that little boy knows that his efforts were not in vain. He affected me and my own personal outlook on not only the outcome of that game, but on my expectations for the season. And he showed exactly what it means to be an Auburn fan.

There’s no need to beat around the bush: This season has the potential to be rough. Our team is going to have some tough tests both mentally and physically. Auburn has a lot of work to do to become an elite football team. But I believe that we are going to watch our boys grow into men before our very eyes. I believe that our young quarterback is going to take ownership of his team and will be a completely different leader by the end of the season. I believe that both our offense and defense will gel and learn how to work together and work within their new systems. The potential is there—they just have to execute.

Am I downplaying a loss and focusing on the future? I'm trying really hard not to. Make no mistake, losing to Clemson on Saturday hurt. Opening the season 0-1 is extremely disappointing, especially with the amount of raw talent on this team. But Auburn lost, so we have to move on.

Former Opelika High School Bulldogs football coach (and Auburn football player) Spence McCracken gave some legendary Homecoming speeches. "God bless America, and God bless the Dawgs," being my favorite. But his story about a donkey who had fallen into a pit rang true on Saturday night. The story goes that a donkey fell into a pit, and his owner had no means of raising him. He decided that the donkey was old and not worth saving, so he started to throw dirt into the pit to bury the donkey. Instead of allowing himself to be buried, the donkey shook the dirt off of his coat and stepped onto the dirt that had just fallen. Inch by inch, the donkey got closer to the top. Shake it off, Auburn, and step up.

At the risk of getting a bit melodramatic, it’s not always easy to be an Auburn Tiger, but the rewards are worth the crap. Losing my voice yelling for our defense is worth having to hear about how much better Alabama is from my fellow 1Ls (first-year law students). Not being able to sing along with the AUMB’s rendition of "God Bless America" without choking up is worth having to take our lumps from the sports media with a smile. I wish our team sat atop the college football world today, but it’s just not there yet. I’m willing to wait a little while longer for this team to find its identity.

If I could talk to the little boy who sat behind me Saturday, I’d tell him this: Don’t give up on Auburn. They won’t give up on you. And the future holds brighter days. Looking at the big picture, I can’t wait to see our team grow up.

And just so you all don’t think I moved away from Tuscaloosa and all of the great Bammer moments, I found this little gem at the mall. It may be a little difficult for your eyes to focus on just one houndstooth item, but I assure you, in a column near the center of the image, there is a structure displaying houndstooth bra and panty sets. For the Bama Belle* who has everything, I guess? 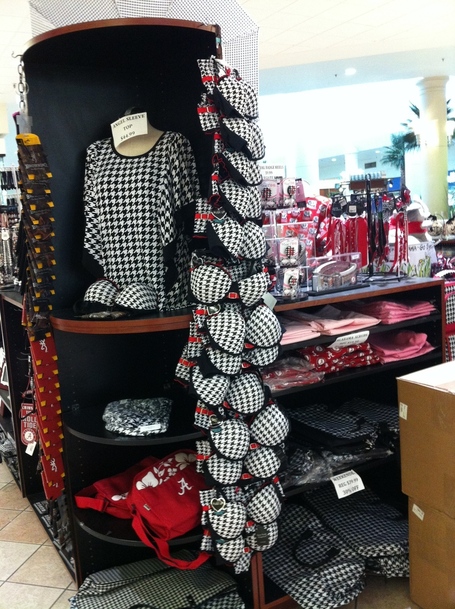 *Incidentally, I am of the opinion that no true Southern Belle would be caught dead in a matching houndstooth bra and panty set, but I'm trying to be less judgmental. Bless their hearts.