This week’s Undercover Barner tells the tale of the Fighting Okra and has some bye week observations.

I know I promised you pictures of Bammers doing funny things at the UA/Ole Miss game, and here we are, one week later: pictureless.

I wish I could say I had a good excuse, but I don't. Not really. I just didn't want to go. Dealing with the headache of game day for a fight in which you don't really have a dog starts to sound awful at about 4 p.m. on a Friday afternoon. If it helps, I will most certainly be attending UA's Homecoming this week, a thrilling matchup between the Tide and the Georgia State Panthers.

Instead of watching the Fighting Sabans take on the Rebel Black Bears, I decided to go to Cleveland, Miss., to a Delta State University game. Now Delta State is a pretty cool place. They like art. Art is cool. Their official team name is the Statesmen. That's neat, I guess. Their band played "Cleveland Rocks" at halftime, and they featured a fire-twirling majorette, who at one point, twirled four flaming batons simultaneously. And I'm pretty sure one of their wide receivers was about 5'4**. All pretty boss. But the best thing about Delta State, if you ask me, is that they call themselves the Fighting Okra. 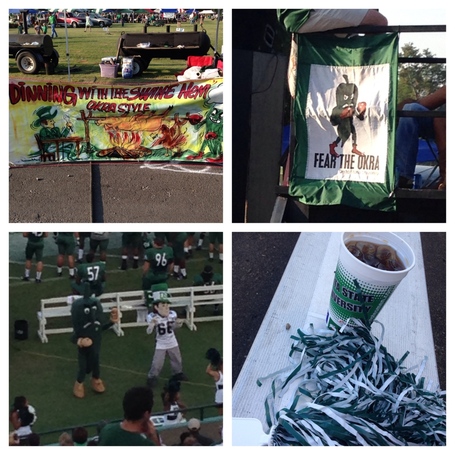 We missed the Pig Pickin' (top left) but did see the Okra and the Statesman palling around (bottom left).

So I spent the game coming up with okra puns and yelling "Warrrrrrrrr Okra, GO!" on kickoffs. There doesn't seem to be any organized kickoff chant, so I tried to leave War Okra as my legacy. Oddly enough, it didn't catch on.

I dressed up in Fighting Okra stuff, too, which was weird. Other than Alabama games in undergrad, I've never dressed in another team's colors to attend a game. The fact that my only exception is Alabama is an issue I'll have to deal with in therapy later on, but I won't bother you with it here***.

Anyway, long story short, I had a great weekend in (on?) the Delta. The people are wonderful and the food is stellar.

So what else happened around the football world this past weekend? Here are couple of observations, mostly about things I read about on Twitter:

Okay, so this one kind of fizzled out at the end. Truth be told, Homecoming is an entire week, and the law school does it right. Forgive my distraction, but I'll be back next week with pictures of locals. Locals are the best.

If you're heading to the Plains this weekend to see our Tigers attempt to keep the Rebel Black Bears out of the red zone, do it big for me. Another night game in Jordan-Hare means an electric atmosphere and a well-rested team playing with fire.

Until next time -- War Eagle!

**And he was the most precious and ferocious one on the field. He wasn't any bigger than a minute, but he'd lower his shoulder and deliver huge hits on his way to first down after first down. I adopted him as my child, obviously.

***I dated an Alabama fan for five years. Love will make you do crazy things. But I never wanted the Tide to win. At anything. Ever.

****This was true before I became roommates and actual best friends with an LSU fan. It's just super convenient.

*****Yes, this is about 2004. Yes, I realize I should direct most of that anger toward Oklahoma, as the Sooners were the ones who didn't deserve to be in the game. No, I don't care. I hate Pete Carroll and Matt Leinart to the point that I will still yell at the TV or the computer when I see their faces. The only reason I don't hate Reggie Bush is because he dated Kim Kardashian, and don't you think he's been through enough? I wouldn't mind seeing them lose everything forever, unless they face the Crimson Tide. Them's the rules.