Auburn vs. Western Carolina preview: (Not an) X's and O's breakdown

This game should be no contest. Rather than participating in a competitive game, the Catamounts will receive a big paycheck, and Auburn will get a chance to see what some younger players can do. Also, this writer gets a chance to catch up on some charting.

Share All sharing options for: Auburn vs. Western Carolina preview: (Not an) X's and O's breakdown

While the Auburn coaches have said they are treating this game like any other game, they are probably more focused on the team in navy and orange. They are considering things like

If you came here looking for detailed information on the Western Carolina Catamounts, you'll be disappointed. Feel free to see preview posts of any Auburn beat writer. And certainly read Chris' Q-&-A with Keith Jarrett of the Asheville Citizen-Times.

Rather than digging up film of the Catamounts, I watched the first quarter of the 2010 Chattanooga game. I can't say "re-watched" because I don't think I ever actually saw this game. Most of the offensive starters, including Cam Newton, only played for a half. The second half was the Mario Fannin show. Its hard to tell from a box score, but most defensive starters only played a half, as well.

Many of the passes were difficult routes over the middle. Routes such as the post, the cross and the dig can be hard to hit because the quarterback has to hit a window over the linebackers and in front of the safeties. I think the coaches were just giving Newton and the receivers extra reps.

Newton was also coached to not scramble if he could help it. He did escape the pocket and run twice, but one of those was after shifting around the backfield for about 10 seconds before he finally gave up on any receiver getting open.

On defense, I was expecting basic zone or man coverage with only four pass rushers. Instead, Auburn blitzed quite a bit. Maybe defensive coordinator Ted Roof was hoping to get some turnovers and get the game out of hand quickly. Or maybe he wanted to give the defense extra reps of certain blitzes.

If Nick Marshall starts against Western Carolina, expect little running on his part. Honestly, I would be surprised to see much of Corey Grant, Tre Mason or Cameron Artis-Payne. Sure, someone has to run the ball, but they won't get more than a few carries each.

Instead, look for Auburn to work on the passing game, just like what they did in 2010. They may try to build some downfield chemistry between Marshall and Sammie Coates. Maybe they can get Ricardo Louis some momentum going into the rest of the season. Freshman Marcus Davis and newcomer to the position Keihl Frazier could certainly use the reps.

On defense, I think Ellis Johnson is going to just focus on everyone doing their job and being in the right position. Remember, this is the first year that Auburn has used a 4-2-5 defense, so more experience is always welcome. Perhaps they also sprinkle in some odd man fronts like the 3-3-5 stack or the 5-2 front they tried to use against LSU.

The Dasher, the Slasher and the Basher

That is a terrible trio of nicknames for Corey Grant, Tre Mason and Cameron Artis-Payne, but the point is that Auburn has three running backs who each use their unique size, speed and skill set to be useful in this offense. Before the season began, I was interested to see exactly how each would be used and if any one back would rise to be the clear leader at the position.

What happened is that each back has had a 100 yard rushing game and proven his worth to the team. So much so that it would be big hit to lose one to injury. Over the course of the LSU and Ole Miss games, Mason has shown to be a true every-down back, but Grant and Artis-Payne are still heavily involved.

I have been charting each Auburn game this season, and one thing I look for is run direction. Did the runner go around the left/right end, behind the left/right tackle or up the middle? I thought it would be interesting to see what plays the coaches are calling for each back and how much success they are having.

The charts below are just for the Washington State game. 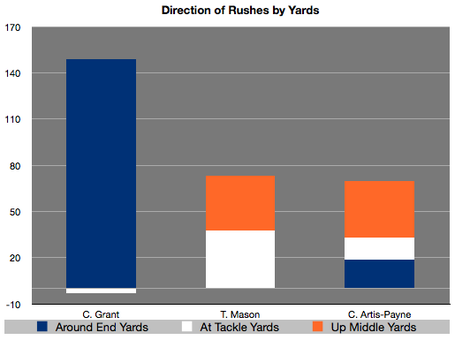 Clearly Grant had the best game of the three backs, hitting a 70-plus yard run around end for a touchdown. However, he didn't gain any yards up the middle and actually lost a few yards behind tackle. Mason and Artis-Payne had similar games, though Mason didn't contribute out wide. 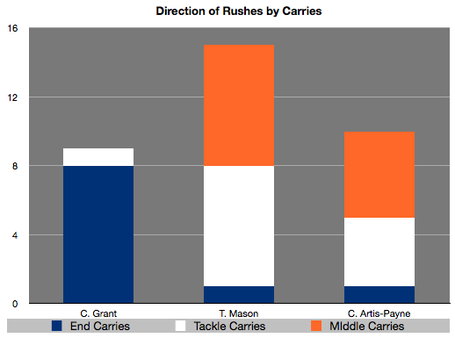 The coaches actually called more plays for Mason through the course of the game, though all three backs got at least nine carries.

Nick Marshall has shown himself to be pretty good on his feet as well, but quarterback runs are tracked differently. Instead of just tracking a run's direction, I chart the reason for the run. There about eight different possible reasons, but in this game, Marshall only ran because of scrambles, read options and draws. 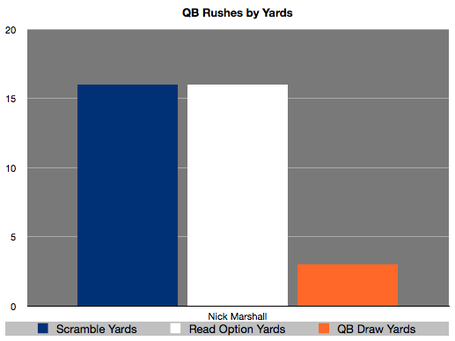 Marshall gained as many yards scrambling as he did keeping the ball with the read option. Not surprisingly, the QB draw didn't really do much. 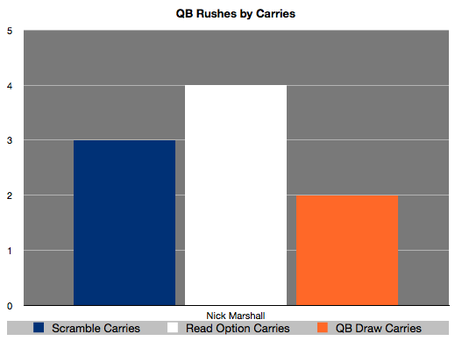 And here's the chart showing how many times Marshall ran in each case.

I understand that these charts are a little paltry. I'm hoping they prove to be more useful when multiple games are included. So while the Tigers are sharpening up their game against the Catamounts, I'll be finishing up the charts for the other games Auburn has played so that we can see how the running game has evolved so far this season.