The game was never in question, but the performances of some players brings questions about how this offense can evolve and expand as the season continues into the second half.

There's only so much you can learn about a team when it plays such an overmatched opponent. Yes, we got our first look at Jeremy Johnson at quarterback, but the competition level must be considered when thinking back on everything that happened. Did Johnson consistently connect with his receivers with the deep pass? Yes, but it was Western Carolina. Did Corey Grant's effectiveness in the outside runs reappear after being missing the last few games? Yes, but it was Western Carolina. Did six receivers (plus two backs) have receptions, providing evidence of a blossoming receiver corps, even with Sammie Coates, Brandon Fulse, and Jaylon Denson out? You get the idea.

With that in mind, there was at least one wrinkle in the offense that should prove useful throughout the season. Plus, with a second viable quarterback, just how creative will Gus Malzahn be to get Johnson and Nick Marshall in the game?

The WildCAP is back, now with six linemen!

Normally, the Wildcat is a formation that features two offensive tackles to one side of the line. This gives the wildcat quarterback two big bodies to run behind. A tight end is usually used in the vacated tackle position. Look for Tommy Trott (No. 5) on the left side in this this video at 1:09. Kodi Burns gains about seven yards, so the play is a success, but Trott looks a little outmanned against a defensive end/outside linebacker double team.

With all of the offensive line talent and depth currently at Auburn -- thanks, previous regime! -- the Tigers can run out of the Wildcat formation with six offensive linemen. Greg Robinson moves over to the right alongside Avery Young. In comes Shon Coleman, who had productive spring and fall camps, pushing the starters on the left and right sides.

Robinson is covered up by the receiver, Melvin Ray, and Coleman is actually an eligible receiver, but the point here is to get lots of size at the point of attack. Behind Robinson and Young, Jay Prosch kicks out a defensive lineman, and Alex Kozan pulls around to block the play-side linebacker. 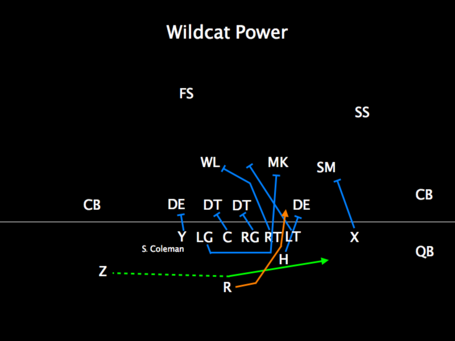 With the addition of Coleman to the left side, the blocking isn't as limited. In addition to Power shown in the video, Counter and Inside Zone Left would be equally effective. One downside is that a play-action pass to Coleman is incredibly unlikely, but, honestly, a pass from Artis-Payne to anyone isn't going to happen. 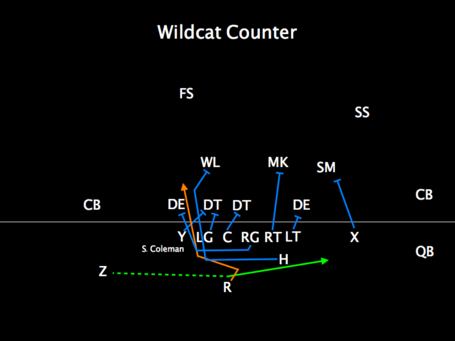 When asked about playing both quarterbacks in a game, Malzahn replied, "We'll see where that goes. I'll get with Coach (Rhett) Lashlee. We're always going to try to do what we feel like gives us the best chance schematically and personnel on the field."

He was most likely talking about each quarterback getting to play a few series, or maybe Nick Marshall playing most of the time with Johnson coming in for a few plays. But what if both quarterbacks were on the field at the same time?

The following could be a defensive coordinator's nightmare, but it's more of a pipe dream. In 2012, Louisiana-Monroe briefly used a two-quarterback system against Baylor. The offensive line zone blocked while QB1 made his read. He handed the ball to QB2 running left, who then threw an easy pass to the slot receiver. The receiver was wide open because the linebacker covering him started chasing QB2. The Warhawks did the same thing on the next play, but in the opposite direction. In two plays, they gained 26 yards and forced a befuddled Baylor to use a timeout

Now, ULM had a right- and left-handed quarterback, so it could run this either direction. Auburn doesn't have that flexibility, but Johnson isn't a threat to run wide anyway. Johnson could play the traditional quarterback role and either keep the ball for a quick screen outside, or hand it off to Marshall. Marshall has made plenty of passes out of bootlegs and rollouts this year, so he would be fully capable of making a pass after receiving the handoff. He could even pull the ball down and run if the defense stays back.

Of course, this is highly unlikely. Instead, Marshall will be the starter as long as he is healthy, and Johnson will come in as the dreaded "change of pace" quarterback. However the staff chooses to use them, let's hope it is effective, maintains each players' confidence and avoids creating a quarterback controversy.