With one of the most prolific offenses in the nation, Texas A&M is proof that all an offense needs to be successful is an extreme offensive philosophy balanced with a few defensive constraints and an all-time quarterback to run it all. Yeah, that's it.

Share All sharing options for: Auburn vs. Texas A&M preview: Breaking down the Aggies' potent offense

Since Kevin Sumlin got his first head coaching position at Houston in 2008, he has hired offensive coordinators in the Air Raid mold. Dana Holgorsen, the Mike Leach disciple, was his offensive coordinator at Houston until he moved on to Oklahoma State in 2010. For the 2011 season, Sumlin hired ex-Texas Tech quarterback Kliff Kingsbury to run the offense. That year, quarterback Case Keenum led Houston to an undefeated regular season and propelled Sumlin and Kingsbury to Texas A&M.

It was there that Sumlin found a third-string, redshirt freshman quarterback named Johnny Manziel, and Sumlin and Kingsbury combined the pass-crazed offense of Leach and the simple run game additions of Holgorson with the improvisation of Manziel and went 11-2 in the school's first season in the SEC.

After last year, Kingsbury became the head coach at Texas Tech (where he is catching Aubielicious's eye). Sumlin promoted Clarance McKinney, who has been on his staff since 2008, to offensive coordinator from within the program. So the Aggies' key to 2013 has been to keep the offense rolling the way it was last year: a focus on the vertical Air Raid concepts, the inclusion of a basic running game and the ability to get Manziel into space.

Throwing the deep ball with Four Verts and Y-Cross

Unfortunately, the Texas A&M Air Raid isn't quite the same as the Washington State version. WSU quarterback Connor Halliday only threw the ball 15 or more yards in the air seven times out of 66 passes. Check downs, stick routes and route combinations such as Mesh allowed the Cougars to move down the field methodically. The safeties, in general, were not tested.

Instead of completing short pass after short pass, the Aggie Air Raid takes plenty of chances with the deep ball. One concept used extensively is four verts.

You can find this route combination in many offenses today -- Auburn has scored a touchdown with it this season -- but it is perfect for the four receiver sets of this offense. If the defense is playing Cover 2 or Cover 3, it cannot defend four deep receivers.

One of the slot receivers is on a locked seam. This means he runs the seam route along the hash marks no matter what the coverage is. This forces at least one safety to play honest. The other slot receiver is a seam reader. He runs his route such that he is always between the quarterback and his defender. If the middle of the field is open (Cover 2), he runs a post in front of his safety. If the middle of the field is closed (Cover 3), he runs a dig route. Against Cover 1, the poor safety has to make a choice about which slot receiver to chase because they are both going deep. 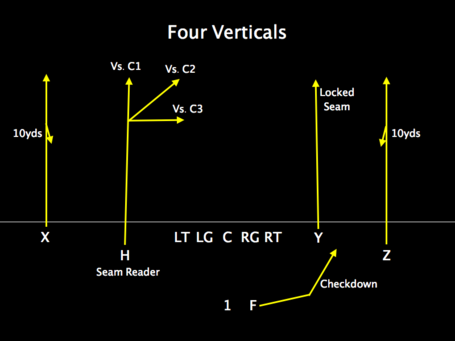 The play below is four verticals from a 3x1 formation. The inmost receiver on the left quickly crosses the defense to run the locked seam. Te next receiver over runs straight at the safety and this crosses in front of him on a post route, putting himself between the quarterback and his defender.

via cdn2.sbnation.com by way of Chris B. Brown

Another deep passing concept in the Air Raid is the Y Cross. Rather than stretch a defense wide down field, this concept stretches one side of the defense vertically by flooding it with multiple receivers.

First, the outside receiver runs a go route, again just trying to beat his man. But unlike in Four Verts, he continues whether he can get past the defender or not. He is just as beneficial to the offense if he takes a defender with him. That's because the slot receiver from the other side is crossing over to fill this vacated zone. Finally, the other slot receiver runs an option route straight at his defender, finding and sitting in a hole in zone coverage, or running away from a man defender either inside or outside. 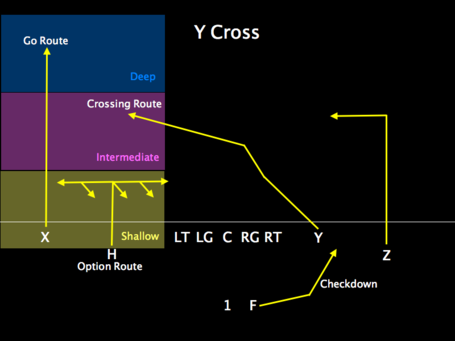 'They dropped nine people ... There was nobody open.'

When Holgorsen ran Texas Tech's offense under Mike Leach, he struggled to design and call passing plays against eight and nine defenders.

Between games, Holgorsen would entreat Leach to call a few more running plays to keep the defense honest. Leach -- who, to be fair, won an awful lot of games doing it his way -- usually declined and kept right on calling passes...

So when he left Texas Tech for Houston before the 2008 season, he resolved to hand off on occasion.

When all Leach's teams did was pass, pass, pass, defenses would only leave five defenders in the box. With five offensive lineman to block those five defenders, the running back should have plenty of running room. So at Houston, Sumlin and Holgorsen introduced a basic running game to their offense, one that carries over into the Aggie offense.

The main running play is Inside Zone. This is an "up the middle" type play designed to get at least a few yards quickly. It also has flexible blocking rules so that it works against any front the defense presents. A counter to this is Outside Zone, which stretches the defensive front across the width of the field while the running back looks for a cutback lane. Here is a good explanation of inside and outside zone.

Against Ole Miss, the second Texas A&M touchdown was scored with inside zone, but from a two-tight end, pistol formation 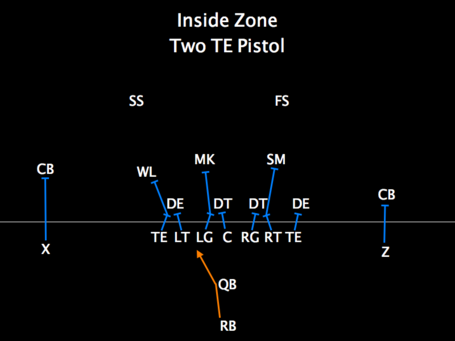 Later, inside zone was the call on another touchdown, but with two players in the backfield and a speed sweep fake to influence the linebackers. 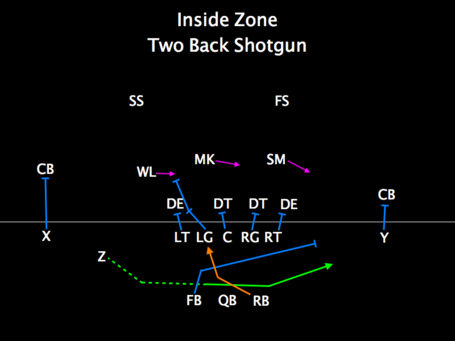 Sumlin and Holgorsen did well at Houston with Keenum. Holgorsen's offenses continued to click at Oklahoma State with Brandon Weeden and at West Virginia with Geno Smith. But what Sumlin found at Texas A&M was a quarterback unlike any of those.

Manziel is as good a pure passer as any of those quarterbacks. He can hit a receiver 5 yards behind or 40 yards beyond the line of scrimmage. He usually makes the right reads and, like most really good quarterbacks, he sometimes tries to fit the ball into tight windows.

But he also solves a problem Leach and Holgersen had at Texas Tech.

Holgorsen: "Mike, I know you don't want to hear this, but there wasn't anybody open."

Leach: "What do you mean there wasn't anybody open?"

Holgorsen: "They dropped nine people and they double-covered all our guys. There was nobody open."

Leach: "Well, how'd they get pressure on the quarterback?"

Holgorsen: "Well, because one guy can't block one guy for seven seconds."

While past Air Raid quarterbacks have gotten into trouble when defenses dropped nine defenders into coverage, Manziel doesn't rely on his offensive lineman to block their guys for seven seconds.

In the game-tying drive against Ole Miss, Texas A&M faced fourth-and-7 at the Rebel 45. If the Aggies could not convert, there would be no comeback. They came out in a five receiver formation and Ole Miss only showed five in the box, six if you count the safety creeping down. The threat of the safety kept Manziel from running up the gut at the snap.

The safety that threatened immediately retreated into the deep middle of the field and the two outside linebackers dropped into coverage, as well. Suddenly, there were only three rushers but nine defenders covering five receivers. Two Rebels did a good job of keeping their eyes on Manziel at first, but the Aggie receivers improvised. They knew that if they ran away from the quarterback, it would open up more room to run. And with only three rushers, it didn't take long for a running lane to open up.

Just as Manziel took off, a defender notices and comes crashing toward the quarterback. Unfortunately for the Rebels, his pursuit angle was into the backfield. By the time he made contact with Manziel, the quarterback was only two yards away from the first down. Manziel shed the tackle just enough to fall across the line to gain and the Aggies scored the tying touchdown two plays later. 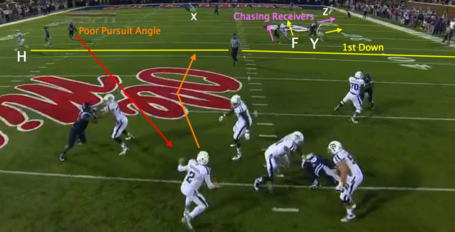 Even against Alabama's spy and pattern matching defense (sort of a man-zone hybrid), he was able to escape the pocket and evade several defenders down the field. In this GIF from the 2012 game, Alabama No. 32 is spying Manziel, but when he takes only two steps in the wrong direction, he is suddenly way out of position. Slot defender No. 20 plays man on the slot receiver to a point and then settles into his zone. By the time he turns around, Manziel is already blazing past the line of scrimmage. No. 20 takes a bad angle and Manziel gains another 15 yards after breaking his tackle.

via cdn2.sbnation.com by way of Chris B. Brown

Furthermore, his speed and elusiveness have allowed Sumlin to turn the Air Raid on its head. There are now designed quarterback runs in this offense.

What can the Tigers do?

Auburn has to take away the deep throws. The Tigers must force Manziel to take the check-down passes. When the receivers make a catch, they must be tackled immediately. Eventually, the short gains will frustrate Manziel, making him take more risks. Hopefully, those turn into turnovers.

The Aggie defense has given up points to everyone, from the smashmouth style of Alabama to the spread to run offense of Ole Miss, and from the "real American football" at Arkansas to the FCS-level triple option from Sam Houston State. But ultimately, the Aggies are going to score points. Auburn just has to score more.