After getting his first start against Western Carolina, Jeremy Johnson played in relief of an injured Nick Marshall against Florida Atlantic. Everyone loves his deep ball, and rightfully so, but he showed his potential with the intermediate passes, too.

Before there was a number by Auburn's name and before we found that a sweater vest goes quite well with a visor, the Tigers started the season against the Cougars of Washington State. Auburn fans got their first look at quarterback Nick Marshall, who was clearly excited as he overthrew a number of receivers, and not just way down field.

Since then, Marshall has proven WSU quarterback Conner Halliday to be rather prophetic, when he said, "If they could find a quarterback, they'd be a top-five team in the nation." Over the course of the season, Marshall has become quite the quarterback and one of the most valuable players on the team as the Tigers have risen to No.11 in the BCS standings. (Not quite top five, but we'll take it.)

Meanwhile, Jeremy Johnson has apparently done so well in practices throughout the season that he got the start against Western Carolina, played three snaps in the Texas A&M game and the coaches say there is a series of plays set aside for him. So when Marshall left the Florida Atlantic game early in the second quarter with a shoulder injury, Johnson got a chance to show what he could do when given the reins.

Johnson is not the scrambler that Marshall is. Nor is he a speedy threat in the read option game. He can gain a few yards on a designed run if needed, but his biggest strength is his pure passing ability. And though Marshall struggled to hit receivers early in his Auburn career, Johnson showed that he can hit a receiver anywhere on the field.

Along with the deep bombs off of go routes, Johnson hit receivers on short posts, quick outs, crossing patterns and screens. After his first two passes, both of which were downfield shots to Sammie Coates, he hit Quan Bray on a quick hitch and just missed Ricardo Louis on a wheel route. On second-and-10, Auburn ran a play-action pass. 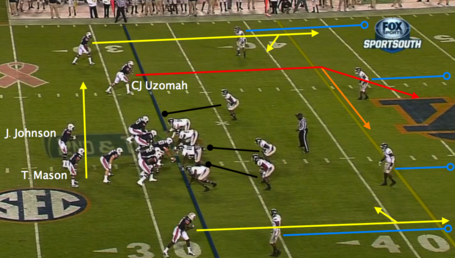 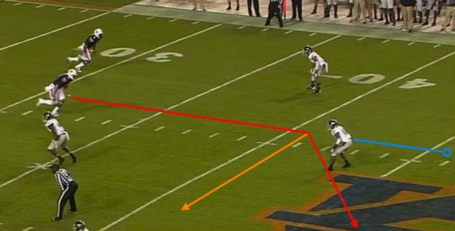 Furthermore, the play action and pulling guard sucked in all three linebackers nearly to the line of scrimmage. This made Johnson's throw even easier since he didn't have to drop it in just over a linebacker's reach. 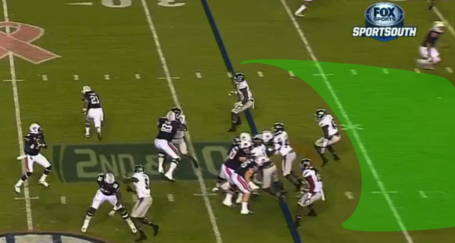 It's important not to overlook the fact that Johnson has to make the same read that Uzomah does. Not only was the right read made, but the pass was delivered accurately and on time.

The Flood After Play Action

Three Tre Mason rushes later, Auburn faced third-and-4 from the FAU 27. Auburn used the quick huddle to disguise the formation, but finally showed a tight alignment with Johnson under center.

Corey Grant wheeled into the backfield and faked a running threat to the left. This play action froze a number of defenders while Mason, Coates and Melvin Ray all ran routes into the right third of the field. Mason ran the short route and Ray ran the deep route, while Coates came across the entire field to fit in the middle. No linebacker thought to give chase, partially because of the play action, but also because Coates ran his route behind the linebackers. They never saw him cross the field.

Johnson delivered the ball, but was just a little behind Coates, who couldn't haul it in. Had the catch been made, there was plenty of space for additional yards. Instead, Cody Parkey made his 10th field goal of the season.

Hopefully, Nick Marshall won't miss any time due to his injury and it sounds good so far. However, if Johnson is pressed into further action, Auburn wouldn't be the only SEC team starting a backup quarterback, and the Tigers might have the best second option.