This week’s Undercover Barner explores the deep discomfort playing Arkansas inspires and the effect that Bert-falling-down-dot-GIF has on mitigating those feelings.

Share All sharing options for: Undercover Barner: Hogs and kisses

The year was 2006. The month, October. The town, Tuscaloosa.

I was a freshman at the University of Alabama, wide-eyed and full of hopes, dreams and naivety.  Elsewhere in the state, Auburn, then ranked No. 2 in the nation, was set to take on 15-point underdog Arkansas in an 11 a.m. game at Jordan-Hare Stadium.

That morning, I found myself tailgating for the Alabama/Duke game in front of Farrah Hall* with my then-current (now very much former) significant other and his family. I don't know why either. But as tailgating is an all-day affair, we’d been there since 9 a.m. or so. As 11 approached, we all gathered around a small TV to watch the Auburn kickoff. Then it all went to hell.

The nice thing about our sometimes-psychotic rivalry is that even if one finds oneself trapped at an enemy tailgate, it’s a pretty safe bet that the Auburn game will be on somewhere, even if it is so everyone there can root against the Tigers. The truly awful thing about our sometimes-psychotic rivalry is that when Auburn lays an egg, fans of a team destined to go 6-7 take particular glee in the aforementioned egg-laying**.

While 2006 saw Auburn win 11 games***, Arkansas was decidedly not one of them. Darren McFadden and Felix Jones were basically unstoppable. I’m really not sure why Auburn even bothered showing up. It wasn’t my first taste of what has been dubbed (not by me, sadly) the Hog Hex, but to me,  it remains the most bitter.

That one time the Riverboat Gambler was anything but a gambler and gave the entire fanbase hypertension.

I blocked this one out. Seriously. I have zero recollection of this game. From the box score, it appears Auburn led most of the game and then lost it in the fourth quarter. Sounds about right.

This is the one we roasted the pig for, so that’s on me. In case you’ve forgotten, under no circumstances are you to roast a pig for the Arkansas game. It causes ranked Auburn teams to lose to unranked Arkansas teams.

2010 is a statistical anomaly that I contribute to the magic of that season. Everything went Auburn’s way in that game, and not even the Hog Hex could stop those Tigers. True story: Of the home games, that one was the most fun. The atmosphere was electric and the fourth quarter was just plain fun.

Now back to our regularly scheduled programming.

Unfortunately, I actually went to this game. Two weeks (one being a bye) after Auburn almost upset LSU (a game I also attended), I expected the Tigers to at least put up a fight against John L. Smith’s struggling Razorbacks (ULM beat them, if you’ll remember). They didn’t. They quit. I saw Emory Blake give up on a block, and it broke my heart.

Auburn is having a pretty good season. Ranked No. 8/11, the Tigers head to Fayetteville as eight-point favorites over the unranked Hogs. While kickoff isn’t until 5 p.m., that dang Hox Hex looms large.

This Auburn team seems to have used each game this season to answer questions, be they ours or maybe even its own. We may not always like the answers, but when the clock hits 00:00, at least we know a little more about our Tigers. I expect Saturday, for better or worse, to be no exception. Is Auburn worthy of a top-10 ranking?**** How will its defense fare against "Normal American football"? What is receiving? Will Nick Marshall learn to slide, or will he just keep hitting people because it hurts so good? Why does the Arkansas team run out of a giant pig nose? Will this lady be there? On paper, Auburn should win this game. In reality, this game should show us if the Gus Bus is equipped to handle success while fending off hexes.

Maybe I was just traumatized by the Tuberville/Chizik letdowns. Call me cautiously optimistic. Maybe cautiously paranoid. Even playing an unranked opponent, I won’t be comfortable unless we’re up by at least 40. Anything less, and I'm back to pacing and climbing on furniture.

To make a long story longer, I hate playing Arkansas.

And that brings us to Bert*****. He isn’t on Mullen’s level of douchebaggery yet, but I want him destroyed all the same. Gus’ "gimmicky high school offense" may not be "Normal" or "American," but Tre Mason, Corey Grant, and Cameron Artis-Payne are coming for you, Bert. Dee Ford and Carl Lawson, too. Let’s just hope Auburn included them on the tape, lest you cry foul.

If you’re making the long trip to Fayetteville this weekend, best of luck to you. May our Tigers call the Hogs to their final resting place and may the late kickoff be ever in our favor.

*Foreshadowing: Farrah Hall is where the University of Alabama School of Law was once located many moons ago.

**I know it goes both ways. I’m elated every time Alabama loses. But that particular day, surrounded by those particular people, I had never been more miserable.

***No really. No one outside of our fanbase remembers that. Auburn lost to Arkansas and Georgia that year and that’s it. You’ll notice that the 2006 national champion Florida Gators do not appear in the loss column. That was a damned good team that couldn't get it together at the right times.

*****Yes, I know his name is Bret. So does everyone else. Embrace it. What is your life, Bert? I'm happy to announce that he has officially joined the list of coaches in over their heads that I'd like to see cry, which includes Mullen, Dabo, and now good old Normal American Bert. Do this for me, Auburn.

Due to scheduling conflicts (namely, Fall Break), the law school celebrated Halloween last week. In the spirit of good sportsmanship and whatnot, a few dear friends and I decided to dress as the heroes/villains of the SEC: Bear Bryant, Nick Saban, Les Miles and Cameron Jarrell Newton. Everyone is a villain to someone. And while you may find yourself annoyed that I embraced the "Cam got paid" stereotype, when you own their jokes, their jokes lose effect. 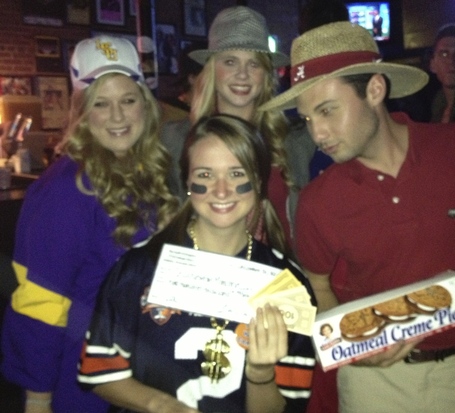 There's also another picture of Saban strangling me, so #neveragain, right?

Also, I was a graphic designer in a previous life, and this check is my greatest achievement: 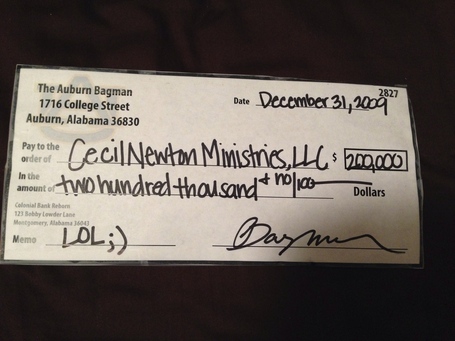