Here are a few of the better games happening outside the SEC this weekend.

Share All sharing options for: College football viewing guide, Week 10: 'Noles get a chance to retake 2-spot in BCS

You read that headline correctly -- it is indeed Week 10. Is it just me, or has this season flown by? Compared to a 2012 season that seemingly lasted entirely too long, this season has been a breath of fresh air. Regardless, here are the best games happening this weekend outside of the SEC. All times listed are Central.

Did you realize that the Trojans have only won two of the last five meetings against Oregon State. It's been nearly a decade since Southern Cal beat the Beavers in Corvallis. Despite those struggles, this may be the year it changes. USC certainly isn't a good football team yet, but the defense has been coming around lately. Under interim coach/crazy person Ed Orgeron, the Trojans have begun to get solid pressure on opposing quarterbacks. On the other side of the ball, the Beavers have struggled to protect their quarterback. If the Trojans are going to win this Friday night, both of those trends have to continue.

Has there been a worse looking team with a great record than Michigan this season? They boast a respectable 6-1 record, but have struggled through games against such traditional powers as Akron and Connecticut. This week, they may be facing their toughest competition of the season so far. Michigan State is a "Normal American Football" team that likes to run the ball and play good defense. Michigan has been able to score with some regularity, but everyone is waiting to see how Wolverines quarterback Devin Gardner fares against the Sparty defense. The rowdy Michigan State home crowd may be a factor in this one.

Much to our disappointment, Texas Tech's perfect season ended in Norman last week. The Red Raiders showed that they have the players to hang with anyone, but there were just too many self-inflicted mistakes to win on the road. Oklahoma State is yet another team with an impressive record that has yet to be tested -- its biggest win this year may have been over Mississippi State. Cowboys QB J.W. Walsh has been impressive in his sophomore campaign, and is mobile enough to keep opposing defenses honest against the run. Let's be honest, though: You don't want to read a Texas Tech game preview. You want to see a picture of a kid dressed as Kliff Kingsbury for Halloween. Fine, you win. 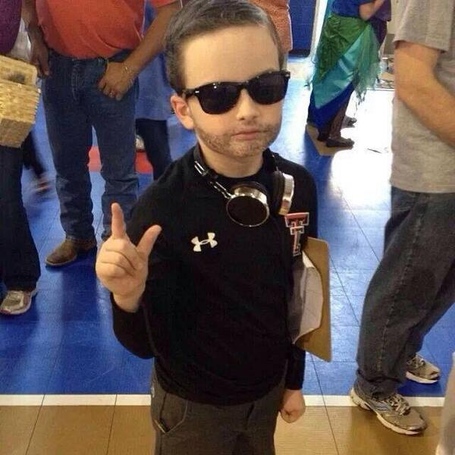 On the surface, this looks like a marquee heavyweight matchup of two elite teams, but appearances can be deceiving. Yes, Florida State is the real deal. Jameis Winston is a stud, and the way that the 'Noles dismantled Maryland and Clemson in back-to-back games speaks for itself. Miami's 7-0 start and No. 7 BCS ranking, on the other hand, is fool's gold. An early-season win over Florida is the closest thing to a quality victory the Hurricanes have on their resume. Since then, Miami has mostly been winning squeakers against terrible teams. Despite being a top-10 matchup, this game might be over by halftime. Don't get your hopes up, Canes. You're improving, but you're not there yet.

Don't forget to check back on Friday for previews of this week's SEC games.