Auburn vs. Arkansas preview: Breaking down the 'swinging gate'

Arkansas head coach Bret Bielema wants to know how Auburn's 2-point conversions work. If you see him, just send him this way.

Share All sharing options for: Auburn vs. Arkansas preview: Breaking down the 'swinging gate'

In the coming years, Bret Bielema will turn Arkansas into Wisconsin-South. Eventually, this team will use big bodies up front to push for three to five yards a play and 12-15 plays per drive. But this Arkansas team is not ready to become Wisconsin-South. Any offensive talent it had graduated after being squandered last year. Bobby Petrino was never able to acquire much defensive talent to begin with. And, according to Louisville sports writer Eric Crawford, there are the post-Petrino doldrums to face.

Bielema is certainly trying to put his stamp on the offense. Arkansas has shown plenty of two-back formations and plenty of two- and three-tight end sets, as well. But I'll leave the breakdown for another time when the Razorbacks are more proficient in their smashmouth attack. Maybe next year. If you want some reading on what they are trying to become, I suggest this piece on Wisconsin's Power run game and this piece about the benefits of using a wing, or an offset tight end.

With that said, if any X's and O's need to be broken down this week, at least according to Bielema, there is nothing more important that the sneaky 2-point conversion that Auburn uses. So here is some analysis I hope he finds useful ...

It's Not a Swinging Gate, It's BATMAN!

Bielema not only brought his multi-back/multi-tight end offense from the Big Ten, but he also brought his, ahem, winning attitude. Particularly, an attitude that doesn't like something and then proceeds to complain about it publicly or otherwise make a scene.

He introduced the SEC to his demeanor over the summer at SEC Media Days by raising injury concerns over hurry-up offenses, though he had no data to support his claims. Most recently, he went out of his way to put Auburn in a negative light by subtly mentioning a game film discrepancy. Though such matters are supposed to be handled behind the scenes by the league and the parties involved, he mentioned it to the media, which of course followed up with the need for more details.

He mentioned that though Auburn just kicked an extra point after most touchdowns, sometimes it showed a "swinging gate" formation beforehand. He then complained that Auburn's version of the game film did not show the initial formation. The matter was reportedly resolved in less than a day, but just in case he didn't get all the information he needs, here is some more detail.

First of all, no matter what Bielema wants to call it, there is no "swinging gate" like what Oregon might do on 2-point conversions. The Ducks effectively have the entire offensive line, minus the long snapper, outside the hashmarks. This is the swinging gate. Auburn calls its 2-point conversion "Batman," though I don't know where that name comes from.

Gus Malzahn made sure Auburn fans saw this new aspect of the team right away by using it after the first touchdown of the season. The Batman formation always includes an offensive lineman, long snapper and offensive lineman on the line with the ball. Behind them is an H-back and a quarterback in shotgun. Furthermore, a tight end is split out to the right just a bit. These six players are always in the same position.

The first time Auburn used Batman, two more offensive linemen were to the left and the kicker was just behind them. On the right were two receivers. Washington State responded by covering the outside groups appropriately (three-on-three and two-on-two), but it left itself vulnerable inside to a rush to the right. There were only four defenders in the right side of the box and Auburn had five blockers, so it was an easy decision to take the two points. Alex Kozan (No. 63) nearly missed his block entirely, but fortunately, Chad Slade (62) was pulling around and was able to get just enough of the defender to allow Ryan White to reach the end zone. 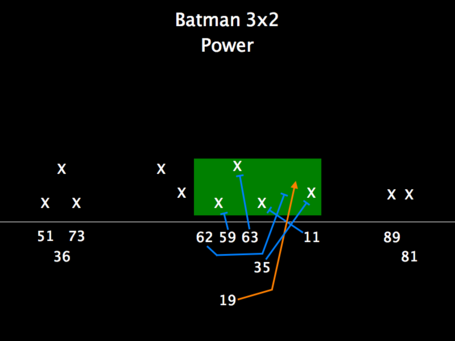 After the second touchdown, Auburn showed the same look, but the Cougars were prepared. They shifted their inside defenders over to the offense's right, and though Auburn had five blockers for five defenders, the play was called off and Cody Parkey kicked the extra point. 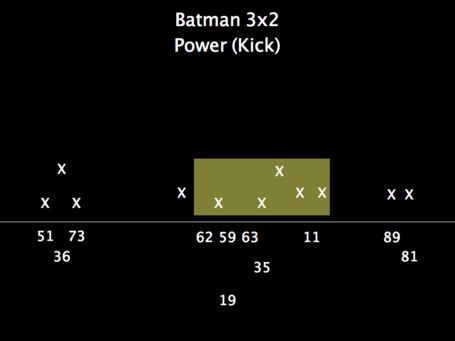 Auburn showed the same formation against Arkansas State the next week, but this time, Cody Parkey (36) and Jaylon Denson (89) swapped sides of the field. This put a viable receiver behind two big offensive linemen. To my untrained eye, this looked like a good opportunity to throw a quick screen to the trips side of the formation. The Red Wolves only had two defenders that wide and Denson probably could have walked into the end zone between two big blocks. But perhaps the defender between the far left and the middle posed too much of a threat to risk it. Auburn abandoned the formation and kick the extra point. 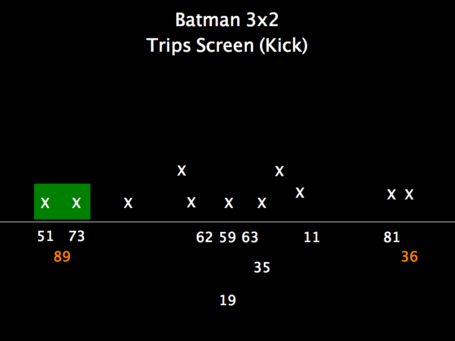 Against Mississippi State, Auburn changed the formation just a bit. Parkey, back on the left side, was on the line, and both receivers to the right were off. This made Parkey and Brandon Fulse (11) eligible receivers. At the snap, White took a few steps to his right, as if he were running again. But the Bulldogs left no defenders deeper than three yards off the line of scrimmage. No one was in the end zone when the play began, so all White had to do was execute his Tim Tebow impression and throw a jump pass over the defenders' heads. I'm sure Dan Mullen enjoyed that tribute to the best player he's ever coached. 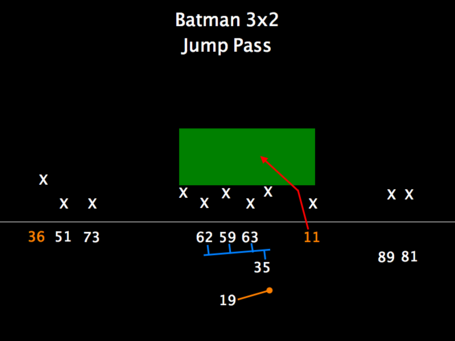 This was the third time Auburn attempted the 2-point conversion, but the only time it has failed. Tony Stevens (8) and Craig Sanders (13) replaced Jaylon Denson and C. J. Uzomah, who were both out for this game (and Denson out for the season). Just as the ball was snapped, one of the defenders to the right rushed to the middle of the field expecting the ball to stay there. Meanwhile, Stevens tried to block the other wide defender while Sanders ran a quick hitch. It turns out that Stevens was faking his block and he easily got behind his man. A pass lofted into the end zone would have been good for 2 points, but White under threw his receiver and Stevens couldn't make the diving catch. 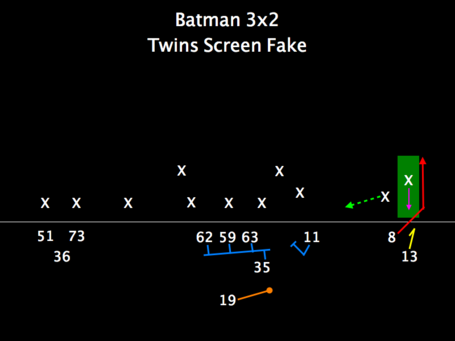 Yes, Auburn used the formation against Western Carolina, but the video doesn't have a wide enough angle to see anything informative. (I feel ya, BERT.) So the next time Auburn showed the Batman look was against Texas A&M. This time the Tigers bring an extra linemen into the middle of the field, Greg Robinson (73). Surely, this was meant to be a run with the added blocker inside, but the Aggies responded well. They brought seven defenders into the box, and with only six potential blockers, Auburn wisely kicked the extra point. 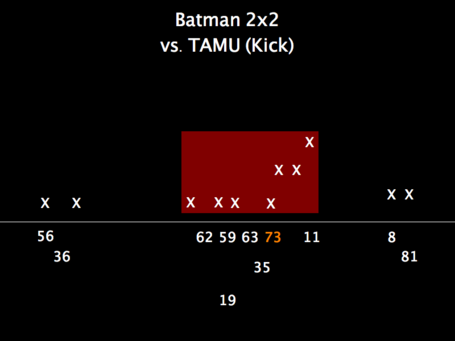 Finally, last week's iteration looked the same except for some personnel, most noticeably Craig Sanders (13) at the tight end spot. Sanders has been a special teams stud since his freshman year in 2010, but I'm not sure what he offers at this spot other than some more blocking, though he is usually a tackler, not a blocker. Regardless, the Owls also managed to put seven defenders in the box, so Auburn kicked the extra point. 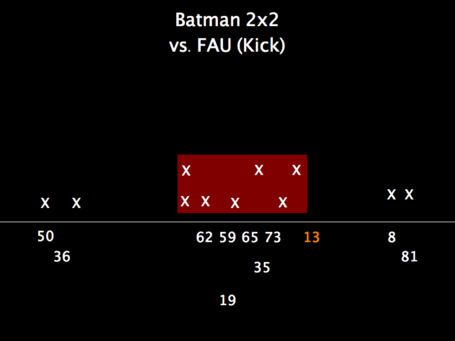 A lot of responses to "swinging gate"-gate have been something like, "BERT is worried about film on the 2-point conversion play that Auburn uses every game? Why would he need last week's film. He has the entire season to look over!" While that's true, Malzahn and special teams coach Scott Fountain have been mixing it up each week. But really, if a coach wants to defend it, he should just find the kicker, put one less man on that side, and put the extra defender in the middle. Either Auburn is forced to kick the extra point or Parkey makes a two point reception. Which of those is more likely to happen?

Regardless, just to show that "Gus stands for everything that's right," let's hope Auburn sent the following videos to Bielema for this week's preparation.