Auburns scored its third touchdown of the game with a heavy dose of the read option, while the Tigers' D-line kept the Ole Miss O-line uncomfortable throughout the game.

Share All sharing options for: Auburn 30, Ole Miss 22: Breaking down the key drives

"I really knew what was coming a majority of the time because I watched film with Coach," Marshall told auburntigers.com. "I was prepared for what they had coming. They like to crash the ends a lot and blitz, and I was able to keep it for good yards."

Using read-option plays out of various formations, Marshall made correct reads more often than not. When the Rebel defense wanted to take away Mason's slashing runs, the quarterback showed his speed and elusiveness outside. When Ole Miss kept him contained, Mason and the O-line kept the offense on schedule with consistently successful gains.

On the other side of the ball, the Tiger defensive line had a Great Awakening. Dee Ford, Carl Lawson and Gabe Wright combined for six sacks and 9.5 tackles for loss. Additionally, the line as a whole gave a clinic on how to defend the read option.

In the postgame quotes, Gus Malzahn complimented Marshall's game, specifically the third quarter drive that led to a touchdown.

With 9:45 remaining in the third, Auburn looked to answer Ole Miss' third field goal of the night, which brought the score to 20-9. When the Tigers reached the end zone nine plays and about three minutes later, they pushed their score up to 27, a number Ole Miss would not be able to match.

Nick Marshall runs up the middle for 2 yards

This is a perfect example of how a read option play is not necessarily a zone read play. Auburn runs the inverted veer, but with angle blocking instead of zone blocking. Marshall reads linebacker Denzel Nkemdiche and decides to keep the ball up the middle. Right guard Chad Slade pulls from the right to lead block left, but Serderius Bryant reaches Marshall before Slade can reach Bryant. 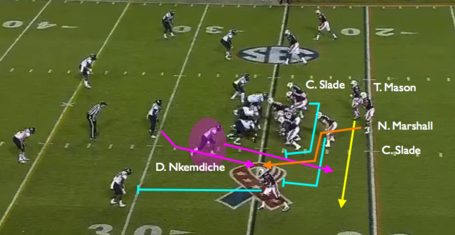 Malzahn shows off a little vertical stretch in his passing game by sending Sammie Coates deep, Grant into the flat and Mason out on wheel route. The Rebel linebackers are further stressed by the play action with a pulling guard. No one chases Mason until he is past the line of scrimmage, and Marshall has a nice 10-yard window to drop the pass into. 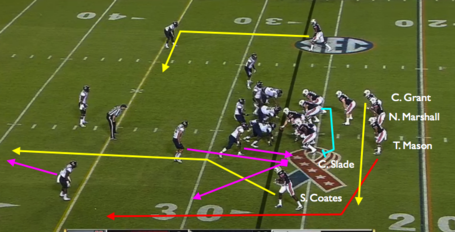 Tre Mason runs up the middle for 4 yards

Auburn leaves the read option for the next couple of plays. Instead, Marshall reads the defenders out wide. In this instance, Marshall just hands off to Mason, who runs behind the offensive line using the power blocking scheme. Jay Prosch immediately attacks the end man on the line of scrimmage. 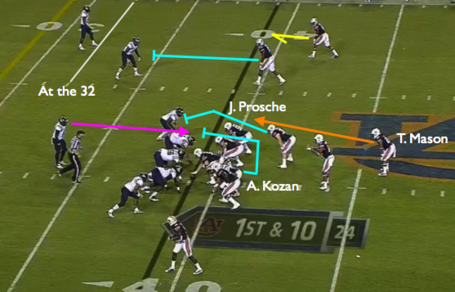 The offensive line blocks down, away from the direction of the play, except for left guard Alex Kozan. He pulls and essentially lead blocks for Mason, occupying the first linebacker he comes to. Notice how the defensive back covering Quan Bray backs up at least two yards immediately after the snap. This leads to the next play. 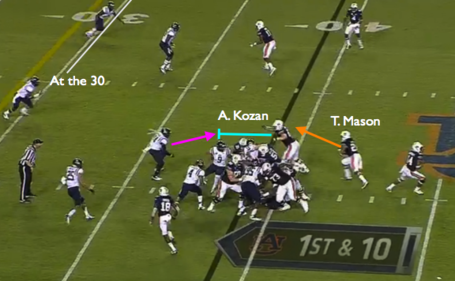 This is the same play as the previous one, but Marshall decides to pass instead of hand off. Mason, Prosch, Kozan and everyone else do the same thing, but Marshall passes out wide to Bray, who has run a short hitch. 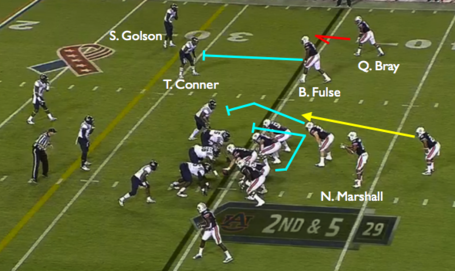 Brandon Fulse gets a good block on defensive back Tony Conner, and Bray is able to make Senquez Golson miss, but Chief Brown hustles to make the tackle after only a 4-yard gain. 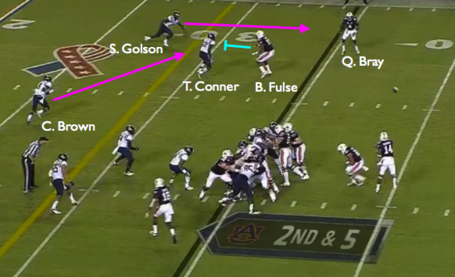 Tre Mason runs up the middle for 2 yards

Now on the right hash, Auburn flips the formation and runs the same play, except the right guard Slade and H-back Prosch swap responsibilities, running counter instead of power. 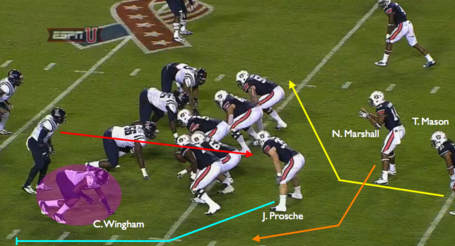 The zone read had been working well all game, and this time it got Marshal 18 of his 140 yards rushing. The offensive line zone blocks with center Reese Dismukes immediately reaching the second level and left tackle Greg Robinson picking up a blitz. Marshall sees defensive end Cameron Wingham break inside, so he keeps the ball and takes off outside, knowing Prosch is arcing around the formation to block the scraping safety. 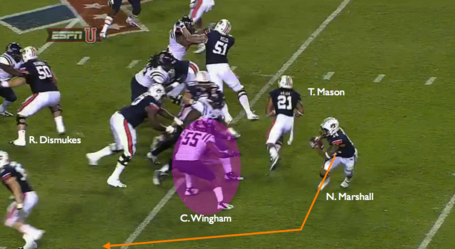 Tre Mason runs up the middle for 5 yards

The Tigers hurry up to the line and run the same play. This time Marshall hands off to Mason, who is actually tackled by Wingham, but he still manages to gain five yards.

Nick Marshall runs up the middle for 1 yard

Zone read is the call one more time. Marshall keeps the ball. The compressed field forces Prosch to block his man closer to the line of scrimmage and this forces Marshall back inside, right into the arms of Wingham.

Nick Marshall runs left for 5 yards and a touchdown

For this third down, Malzahn shows a lot of window dressing, but ends up running a pretty standard play. First, only one of the receivers to the right is eligible, while left tackle Robinson is the other eligible receiver on the line. Second, Mason is replaced by Grant. This is not that strange, considering the initial formation. Grant often lines up wide only to come across on a speed sweep. What is strange is that he motions into the backfield before the snap and actually runs up the middle on the zone read.

When Grant motions into the backfield, Auburn shows the inverted wishbone/diamond formation with two H-backs, Fulse and Prosch. Marshall reads Wingham again, who chases Grant inside. Suddenly, Marshall has two blockers in front of him, two defenders in front of them, and a ton of green space to the left. Wingham manages to get a hand on him at the 2-yard line and safety Trae Elston slows him down a bit, but he falls forward and scores a touchdown. 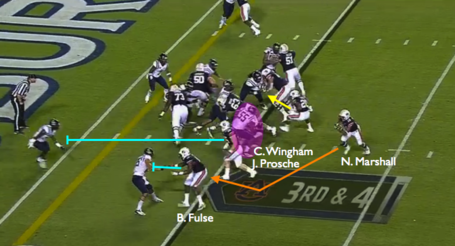 Who leads the SEC in TFLs per game?

Auburn, that's who, with 42 total tackles for loss, or 8.4 per game. The Tigers racked up 14 against Ole Miss alone to complement their six sacks. This is the same Auburn team that has been gashed by the likes of Dak Prescott of Mississippi State and Jeremy Hill of LSU. In this game they were able to bottle up the Rebels' running game except for a few big gains. They gave a clinic on how to shut down the read option without sacrificing the secondary. They used great technique and containment to collect sacks against an elusive quarterback. And the trust and chemistry among the players led directly to an interception.

When I wrote about the read option before the game, I failed to mention the simplest way to counteract it. Muddy up the quarterback's read. This was one of the techniques that Stanford defensive coordinator Derek Mason taught NFL teams during the last off season.

"The quarterback wants a fast read all the time. If you don't give him a fast read, then things start to break down and he starts to panic because everything is predicated on him being able to make a fast read. Especially in the NFL, because they don't want to get that guy hit. If you come up the field and then try to squeeze, it's now hard on the quarterback."

Be sure to watch the video at the end of the linked article. Mason diagrams and explains exactly what he means by not giving the quarterback a fast read.

Ole Miss ran zone read on the first play of the game, but LaDarius Owens made sure the Rebels knew it wasn't going to be that easy. At the snap, Bo Wallace and Jeff Scott mesh as Wallace reads Owens. Wallace is supposed to dictate the action by making Owens wrong, but instead, Owens muddies the read. 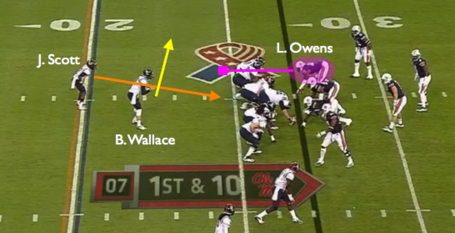 He runs straight upfield, forcing Wallace to hand the ball off to Scott inside. Then, Owens stops in his tracks and crashes inside, anticipating that his initial move would send the run that way. With help from Gabe Wright and Nosa Eguae, Owens brings Scott down for a gain of only 1 yard. 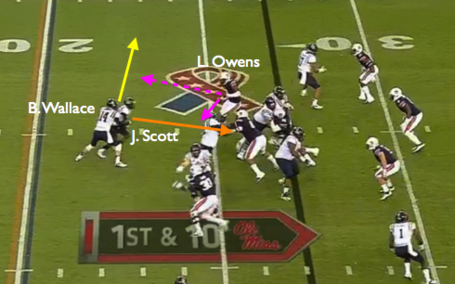 The same tactic would work against the inverted veer, as well. In the second quarter, Wallace meshes with Eugene Brazley. Owens runs upfield so fast that the give is obviously taken away. But Owens is so quick that he is able to crash inside again and tackle Wallace for a loss of one yard. 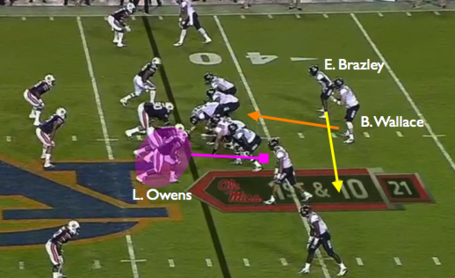 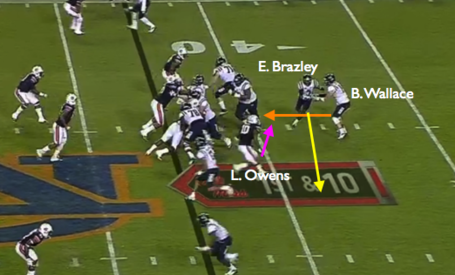 Carl Lawson, the five-star true freshman from Alpharetta, Ga., had made only a minimal impact on the field in previous games. Two solo tackles, two assisted tackles and a QB hurry were all he had to show for the first third of the season. But Lawson showed his potential against the Rebels by amassing six tackles (3.5 for loss) and two sacks.

There are many pass rushing techniques, but at the high school level, many of the best players only use the simple bull rush or speed rush. They can overpower or outrun their opponent. Near the end of the second quarter, Lawson showed his growth as a player by using one of the more advanced techniques, the rip move. 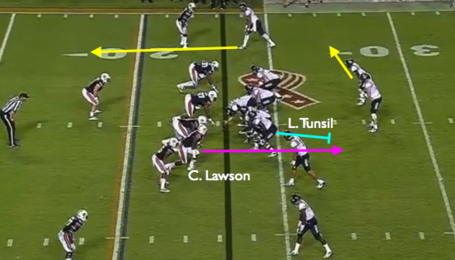 Lawson attacks the outside shoulder of Laremy Tunsil. About 5 yards up field, Lawson dips his inside shoulder and gets small, meaning he keeps his shoulder turned away from the left tackle. This gives Tunsil less of a target to push. Then, Lawson uppercuts with the inside arm, throwing the tackle's arms off. Finally, he plants his outside foot and turns inside to chase down Wallace for the sack. 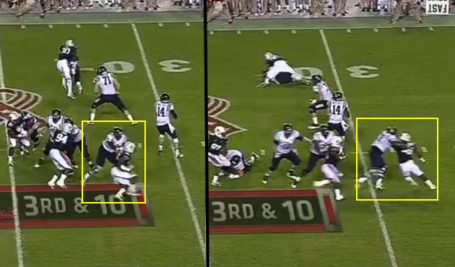 On Auburn's last defensive snap, Lawson used a counter move to beat Tunsil. At first, it looks like he is using a speed rush, trying to out run Tunsil around the pocket. 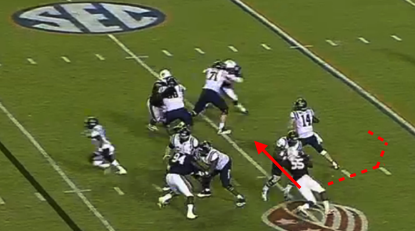 But as soon as they both reach the quarterback's depth, Lawson uses his inside arm to shove Tunsil further upfield. This gets the left tackle off balance just enough for Lawson to make a beeline to Wallace. 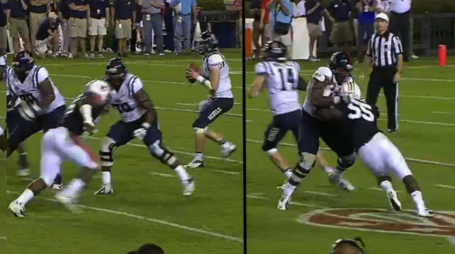 The defensive line also disrupted the game in other ways. One example is Bo Wallace's second interception. On 3rd-and-7, Auburn only rushes three players as Dee Ford follows I'Tavius Mathers out of the backfield. But Wallace expects Ryan Smith to take the flat. Donte Moncrief runs a slant in front of Chris Davis, and Wallace fires. 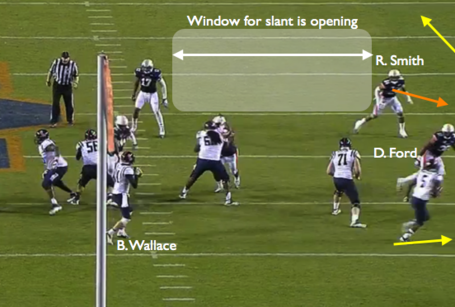 Fortunately, Smith only takes one step in the wrong direction. He corrects himself and is able to stay back in intermediate coverage and make the interception because Ford did his job up front. 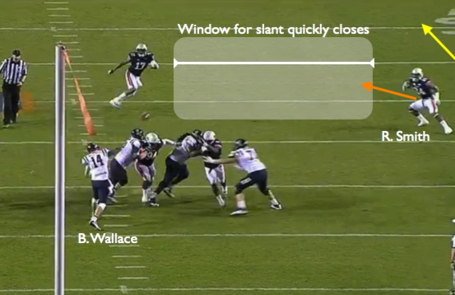