Undercover Barner: Georgia on my mind

This week’s Undercover Barner had every intention of just listing reasons why Georgia is the worst, but instead discusses Tennessee, LSU and Alabama first, and only says "Dwags" once. OK, maybe twice.

Share All sharing options for: Undercover Barner: Georgia on my mind

Well the Tennessee game was fun, wasn’t it? Auburn only had to complete three passes to beat the Vols by 32 points. The rest was gained on the ground in convincing fashion. I’d say that’s dropping the hammer.

Ah, the elusive hammer*. It was something that was missing from the Tuberville/Chizik years. It’s hard to describe the frustration of watching your team build a small lead and then watching the offense shift into ultra-conservative mode, like the Barry Goldwater of offenses.  It’s frustrating to watch a coach sit on a 10-point lead like it’s going to hatch. But I don’t have to tell you that. You were there.

Thankfully, Gus likes to score early and often. There always seem to be a few hiccups (sometimes lasting the entire third quarter), but overall, he’s not afraid to put players in position to score points. If this were Facebook and I were making statuses everyday in November about things I’m thankful for, today’s status would be about Gus Malzahn’s offensive philosophy. All our points are belong to Gus**.

Unfortunately, I was only able to watch the first half of the Tennessee game due to some serious tailgating going on on Alabama’s Quad. As promised, I donned purple and gold and accompanied my best friend off a cliff and into the belly of the beast. 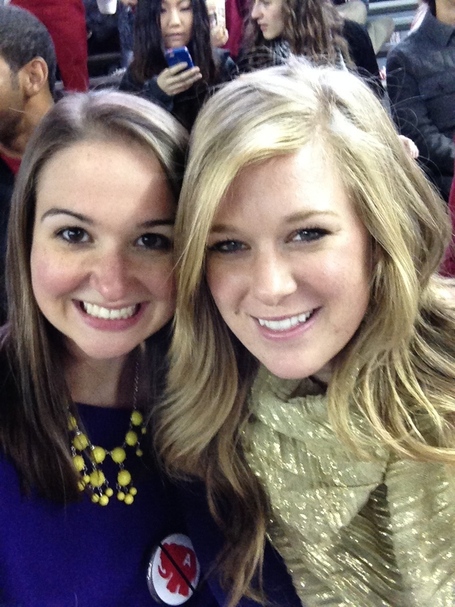 I have to say it was an interesting experience. I really enjoyed meeting LSU fans and yelling "Tiger Bait" at people***.  I was also thankful for the heightened police presence. But really, from the time we arrived on campus in the early afternoon to the end of the third quarter of the game itself, people**** were pretty pleasant overall. Even though we were in the student section, the law school's excellent block seating kept us away from most of the general population. There was the usual heckling but nothing that couldn’t be easily ignored.

Once the game got out of hand, though, things took a turn for the worse. While LT and I only cheered when it was appropriate and didn’t purposefully engage anyone, a few undergrads (who had infiltrated our section) took it upon themselves to make sure we knew we were not wanted in the section. Thankfully, one of our tall friends was kind enough to protect us, even though we were wearing the wrong colors. We stayed until the clock hit 0:00 — because the Bayou Bengals are LT’s heart — and then we got the hell out of dodge before we had to hear too much Rammer Jammer. No one got into a fight, so other than the outcome of the game, I guess it was a success. Whatever. Geaux Tigers.

It’s hard to believe we’re coming up on Week 12 of this season. If you would’ve told me in August that we’d be heading into the Georgia game at 9-1 and ranked No. 7 in the country, I would have laughed in your face. Actually I did that to someone, kind of. I had a War Eagle Moment with a guy at Publix and he said he thought we’d win the West. I laughed.

The road to Atlanta is riddled with sinkholes and full of worry, but Auburn controls its own destiny. Did you hear that, everyone else? Little Auburn, whom you thought you’d be able to kick around for the next few years is actually competitive again. It’s entirely possible that we’ll lay a giant egg in the Amen Corner and end up 9-3. Obviously I’d prefer a different outcome, but you know what? It’d still be great to be an Auburn Tiger.

Which brings us to the first of those sinkholes, the Deep South’s Oldest Rivalry. For those of you from Georgia, I know this game means just as much, if not more, to you than the Iron Bowl. I remember this rivalry being friendly when I was a child, but it’s taken a nasty turn in the last few years*****.  I expect Saturday’s game to be no different. Emotions will be running high for both teams, as they both have a lot to play for. Georgia has suffered some disappointing losses this season, mostly due to some unfortunate injuries, and the Bulldogs will be looking to save what’s left of their season. The Tigers will be playing for a chance to have the Iron Bowl decide the West. How delicious.

Make no mistake, this is a very, very dangerous game for the Tigers. A healthy Todd Gurley****** is terrifying.  And if we have no one to stop him up the middle, he’s going to gash us all day. It seems like Aaron Murray has been there for a hundred years, and I’d love to send him to the NFL with a loss at JHS, but it’s going to take some inspired defense to stop the Dwags.

But enough of that. I’m not your Xs and Os girl. I’m all about the intangibles and adopting 18-22 year old student athletes as my children. Do I believe the Tigers can win on Saturday? Yes. Will they? I think so. I am terrified of this game, but this team believes they can win out. The least I can do is believe in them, too. There are a couple of things running in Auburn’s favor right now. The home game probably helps more than anything. And with the time change, the second half of a 2:30 kickoff will be mostly at night. Dee Ford and Carl Lawson pursuing Andy Murray under the lights of Jordan-Hare? Be still my heart.

If you’re making the trip to Auburn to see the Deep South’s Oldest Rivalry, do yell loudly. Yell when we have them backed into a corner and yell if we find ourselves in one. Never stop yelling. I’m still on the fence about making the trip*******, but I may be there to yell with you. This team is hungry, and it wants Georgia.

*Not the NCAA #HAMMER, though that one was conspicuously absent from that time period, too.

**I linked to the originator (as best I can tell) of that gem, but if you don't get it, know your meme.

***By now, you know I don’t engage people without being provoked. Any and all Tiger Bait yelling was done in retaliation to drunken insults.

****Law school people are No. 1 when it comes to acting like they have home training.

*****Seriously, Georgia fans are the worst. If you follow me on Twitter, you know I’m on a quest to never let them forget Nick Fairley. I’m having way too much fun. 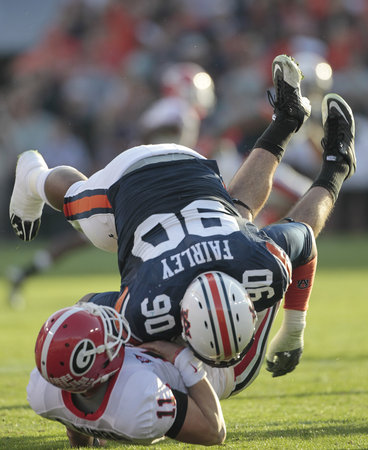 ******In news that should surprise no one, I've adopted Gurley. He is a precious angel kitten, and I adore him. I want him to have an awful game on Saturday but wish him nothing but success afterward. My other non-Auburn football children are Marcus Lattimore and Julio Jones. No, I don’t want to talk about that last one.

*******Seriously, it’s going to be a game-day decision. If I wake up on Saturday morning feeling froggy, you’ll see me on the Plains.