Auburn vs. Georgia 2013 preview: Tigers' balance and stopping the run

Just how unbalanced is the Auburn offense, and will it be forced to put the ball in the air when facing the Georgia defense?

Share All sharing options for: Auburn vs. Georgia 2013 preview: Tigers' balance and stopping the run

First of all, I'm sorry about skipping the Tennessee review, but if the playmaker can take a week off to go see his favorite bands, surely I'm excused for having to take care of my own 7-week-old responsibilities.

Rush for 1,099 yards over the course three games, and what does it get you? Claims that your team's offense is unbalanced because there were only 34 pass attempts in those games, not even reaching double-digits in the last two. So this Saturday, Georgia will be trying to stop Auburn's running attack, while the Tigers try to prove their air game is still as good as it was against Mississippi State.

What is offensive balance?

For the numbers below, only FBS vs. FBS games were counted. Also, sacks and sack yardage were subtracted from rush attempts and rushing yardage and added to pass attempts and passing yardage, respectively. Courtesy of cfbstats.com.

To achieve offensive balance, should running and passing plays be split 50-50? Or maybe the yardage gained should be roughly equal between rushing and passing. Passing is inherently a riskier method of moving the ball, so if you can gain as many yards on the ground as through the air, why throw the ball?

Next, consider the Nash equilibrium and how it might relate. (Disclaimer: I'm even less of a statistician than I am a football tactician.) If your team is great at running the ball, defenses are going to do their best to limit that aspect of your offense. After facing such a defense, yards per rush may still be good, but they probably decreased. But with the defense focused on the run game, passing yards per attempt should have increased. Then defenses will adjust, limit your passing success, and your running game will pick up. There should be an equilibrium in there somewhere. Averaging the stats of 125 teams for eight or nine games each should be at least a decent way to find that equilibrium, so using the passing premium as a guide, if a team is gaining about 1.74 more yards passing than running, I would argue that the team's offense is balanced.

Finally, let's look at some specific teams and see what this passing premium tells us about their balance. The Tennessee Volunteers are running the ball 53.3 percent of the time, gaining 5.22 yards per rush and 5.32 yards per pass. That's a pass premium of only 0.1 yards, meaning they are getting almost as many yards on the ground as through the air. This tells me they have been overly dependent on the passing game and that they should run the ball more since they can get the same yardage without the added risk.

The Georgia Bulldogs run the ball 55.3 percent of the time, which is almost the exact FBS average, but they gain only 4.83 yards per rush while gaining 9.1 yards per pass. Clearly they are beating the average passing premium, so I think they should throw even more. They are leaning on the run more than they need to when they could be passing effectively despite the added risk.

The Auburn Tigers are running the ball 71.2 percent of the time, less often than only New Mexico, Air Force, Georgia Tech, Army and Navy. But Auburn is averaging 6.26 yards per rush and 7.8 yards per pass, so its passing premium of 1.54 is astonishingly close to the FBS average. The Tigers don't call many pass plays, but when they do, they are effective at just the right rate to account for the additional passing risk. According to this measurement, Auburn is actually one of the 20 most balanced teams. Remember, no one was questioning Auburn's passing ability before this week.

Basically, if running and passing were equally risky, then a balanced team would produce the same number of yards either way. Instead, passing is riskier, so there must be additional yards available to make it worthwhile. And averages from this season show a balanced team will gain 1.74 yards more per pass than rush.

In the meantime, as long as the Tigers can't be stopped on the ground, Gus Malzahn is going to keep it on the ground. But with the fourth-best rushing defense in the SEC, Georgia looks like a team that might be able to slow Auburn down. So far, only one team has held the Tigers to fewer than 200 rushing yards: the Mississippi State Bulldogs, but that was also the only game in which Nick Marshall completed over 20 passes. When the defense forced it, Auburn was able to pass the ball effectively, especially at the end of the game. So what exactly caused so much trouble on the ground?

First, there were some things that Auburn has improved since the game against those Bulldogs. The H-back, wide receivers and offensive linemen all simply whiffed on blocks at some point in that game. Mental errors rather than strength or skill prevented them from executing their responsibilities, but Auburn has become much better at this over the course of the season. The offensive line stays on blocks longer, Jay Prosch makes solid contact with his man in space and the receivers don't let plays get blown up in the backfield.

In the image below, Prosch (No. 35) has blocked his man, but he had to dive at his feet to do so. Corey Grant (20) then has to leap over that defender and he loses some speed. Notice the blocking by the slot receiver. He just tries to knock his man down. This defender quickly recovers and is able to delay Grant even further, and eventually the safeties come up to stop this play for only about 3 yards. 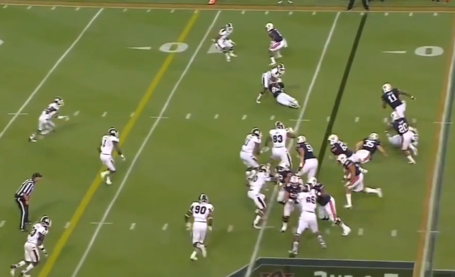 Marshall's reads are also much, much better now. Remember, his breakout running performance was two games later against Ole Miss. Against Mississippi State, he rarely kept the ball after the mesh point of a read option, even when the defensive line crashed down inside. Not only did this lead the running back into a well-defended middle, but it gave up the possibility of big gains outside. 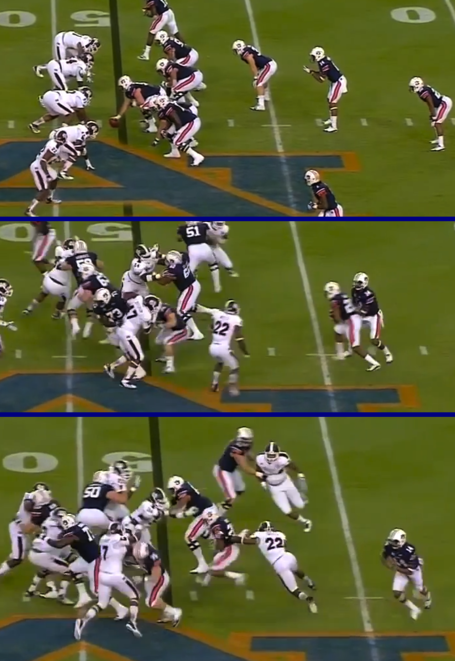 One thing the Bulldogs specifically did to take away the run game was use six men in the box and have their nickel back cheat inside as a seventh man. Granted, Tennessee showed eight-man boxes and it didn't slow Auburn down, but having that seventh player proved to be effective for Mississippi State.

One way to defend the read option is to take away the outside run option and force the ball into the middle of the defense. That way there is less room for the ball carrier and more of a chance that a defender will be able to reach him. Against Arkansas and Tennessee, defensive linemen and linebackers often would all be sealed off by the great Auburn blocking and Mason would just bounce it outside for a big gain. Against Mississippi State, the defense commonly showed a five-man front which increased its width across the line and prevented any bounce outs. Mason and Cameron Artis-Payne were consistently forced to fight through traffic in the middle.

Finally, the Mississippi State linebackers played a huge role in stifling the Auburn running game. When using inside zone blocking, the offensive line uses combination blocks and double teams defensive linemen long enough to get an advantage, but they eventually reach the second level and block the linebackers. With the power blocking scheme shown below, two pulling guards and an H-back couldn't were supposed to kick out defenders on that side of the ball. But the Bulldog linebackers didn't wait around for this. They attacked the offense as soon as the ball was snapped and didn't allow themselves to be blocked past the line of scrimmage. 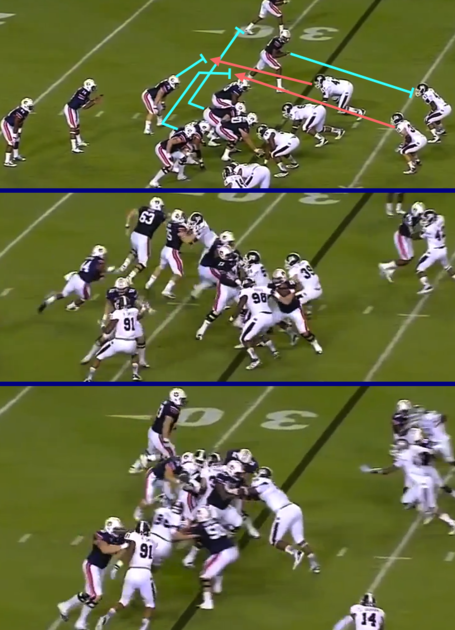 So has Auburn's running game gotten that much better over the last two months, or did Mississippi State create a template for stopping the Tigers on the ground? I think we'll start to find the answer to that question on Saturday. And for some insight into the Georgia offense, take a look at this post on the Gurley Effect by CGPeltier.