The world turned upside down, and it's a miracle no one perished in the eruption of humanity as Louis strolled into the end zone.

College football is a great sport. The level of talent on the field and technical quality of the game can't touch the NFL, but the history that breeds feuds like Auburn vs. Georgia, played 117 times since 1892, is what makes the college football fan's life filled with exhilarating highs and deep, dark lows. Auburn-Georgia is one of those series that provides moments of elation and despair that stick with a man, woman or child for life, and Saturday night in Jordan-Hare Stadium proved no different. Auburn won, 43-38, thanks to a Ricardo Louis touchdown catch, a play that slowed down time and turned 87,451 individual humans into one large conglomeration of humanity and love.

In the moments leading up to the play, Jordan-Hare was a sea of orange and blue despair, speckled with a few red-and-black islands of joy. After Georgia quarterback Aaron Murray careened into Auburn linebacker Jake Holland and safety Ryan Smith, somehow crossing the goal line on fourth-and-5 with 1:49 remaining and putting the Bulldogs ahead, 38-37, it seemed like the inevitable conclusion to a disaster that would linger with fans on the Plains for years. Auburn built a 20-point lead, thanks to a 32-yard Cody Parkey field goal, with 12:49 left on the clock. But the Tigers had left plenty of points on the field -- it was Parkey's third field goal of the day, all coming after long drives that, with better red zone execution, could have been touchdowns; plus, there was the blocked field goal attempt -- and the large advantage still didn't feel totally safe. Over the next 11 minutes of game time, everything unraveled.

Auburn's defense lost its edge, Georgia's offensive line finally began opening holes for running back Todd Gurley, and Murray finally began checking down and making short throws the Tigers were happy to give up. The result was three consecutive touchdown drives with little resistance. When Auburn was on offense, needing one more sustained scoring drive at some point in the final quarter to put the game away, the mounting pressure was obvious in the play-calling and execution. Gus Malzahn and Rhett Lashlee went conservative at times, and when the head coach and offensive coordinator did attempt take a big shot down field, the result was either an over throw from signal-caller Nick Marshall or a receiver making a play on the ball out of bounds, showing no sideline awareness. On the Tigers' penultimate drive, Marshall was taken down in the backfield on third-and-10, the final play of a three and out that took just just 1:05 off the clock. With the rest of the team crumbling, Steven Clark proved that he, too, had succumbed to the pressure, shanking a 31-yard punt that set up the Dawgs 45 yards away from a potential win. No one in attendance, no matter the allegiance, was surprised when Murray crashed into the end zone 10 plays later.

In the moments leading up to The Play, the atmosphere in the stands was decidedly morose. I was sitting in the east upper deck, about halfway up and aligned with the 30-yard line on the south side of the field. From there, I had a spectacular vantage point to watch the game unfold, and I could see each detail in Auburn's final drive develop. On Marshall's first-down pass, I could easily see Georgia freshman cornerback Shaq Wiggins jumping Quan Bray's dig route, and I was only surprised when Wiggins didn't intercept the pass and crush the home faithful's hopes once and for all. A few plays later, I saw just how much traffic Sammie Coates would have to navigate in order to make a big play out of his catch on a tunnel screen. He nearly did it, but linebacker Jordan Jenkins was able grab Coates' jersey and slow him down enough so that his teammates could gang tackle the receiver. From where I was sitting, it looked like Coates' jersey was stretching at least 15 yards behind him, begging to tear and allow No. 18 the freedom to escape for his own miracle. When Marshall was sacked for an 8-yard loss on third-and-10, it was easy to see the pocket collapsing around him. Within a split second, I knew the play was doomed.

Auburn called timeout with 36 seconds showing on the clock, and in the minute or so of downtime, I reached into my left sock and pulled out a single miniature bottle of Johnny Walker Red Label. It was the only thing I had sneaked into stadium, and I had been saving it for a time when I was at my most desperate. With only a fourth-and-18 play between me and one of the absolute worst Auburn defeats I had ever experienced. I sat in my seat -- Section 105, Row 20, Seat 20 -- finished half of the contents in the bottle and passed it to my friend, whom many of you on the Internet know as RunYogaSurf, sitting to the right of me. When head referee Penn Wagers' whistle announced that the coaches' short window for instruction was over, and that it was time for the players to get on with it, I stood up in the aisle to my left and waited for the impending heartbreak.

And then this happened:

Those were the only words the roughly 60-year-old man sitting in front of me could utter -- at the top of his lungs, mind you -- while grabbing me by the shoulders and nearly pulling the both of us down for a 20-row tumble into fans below us. Really, what else was there to say? I'm 28 years old, and I've been to countless games at Jordan-Hare Stadium since my childhood. I've never before experienced anything like that in the home of our Tigers. I imagine if I were 128 years old, I could still make that statement with accuracy.

When Marshall uncorked his pass and the ball was in the air, traveling from my right to left, Louis was clearly the only Auburn receiver streaking down the middle of the field. Georgia safeties Josh Harvey-Clemons and Tray Matthews had what appeared to be a huge head start on Louis, and it looked like Marshall's throw would sail over everyone, landing harmlessly on the turf. But it didn't, and the ball, the two Georgia defenders and Auburn's one last hope seemed to collide at the same moment and occupy the exact same space. The ball took an improbable bounce off Matthews' and Harvey-Clemons' hands, a deflection that still doesn't make since, and because of the ceased momentum of the safeties combined with the receiver's full sprint, Louis took on the qualities of a man shot out of a cannon. As the world slowed, he sped up and found a gift falling right in front of him.

In that instant I could hear every and feel every molecule of air sucked out of Jordan-Hare. Make an audible gasping sound, and think about that multiplied times 87,000. That's what it sounded like. It felt like a quick, light breeze. Having now seen the replay countless times, I realize Louis bobbled the ball only twice before securing the catch and scoring. But had you asked me after seeing it live, I would have sworn there were five or six juggles, covering maybe 20 yards. The ball kept fluttering in front of the now-Auburn legend, teasing his finger tips and refusing to be possessed. But Louis would not be denied, and he would not let the biggest opportunity of his football career literally slip through his hands.

As he carried the winning score into the south end zone. I leaped into the air, likely setting a new personal-best in the vertical jump. When my feet and legs reconnected with the ground, they launched me sideways to the right, where I wrapped my arms around every person I could. In reality, I was hugging one or two people at a time, but in the moment, it felt like I was fully embracing a full section. This was everyone's reaction: one leap up, one leap in a random direction, leading to giant tangles of people throughout Jordan-Hare. The only thing that could be heard was loudest unified voice that has ever echoed throughout that stadium. It was almost white noise. I'd like to compare it to some other Auburn game I've witnessed in person. The 10-9 win over LSU in 2004 is the closest, but even that one didn't feature the level of pandemonium seen Saturday night. 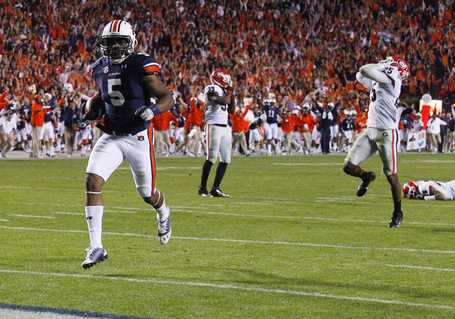 I've been to several Auburn-Georgia games over the years, and most of them ended badly for me. Yes, I was on hand to see Ben Leard score on an overtime quarterback sneak in 2000, and I saw with my own eyes in 2004 the most dominating performance the Tigers have ever delivered against a top opponent. But I was also there in 1994, when a 23-23 tie ended Terry Bowden's 20-game winning streak. In 1996, I saw Georgia come up with a Hail Mary of its own, scoring the game-tying touchdown on the final play of regulation. In the first overtime game in SEC history, the Dawgs won after four extra periods. I wanted to cry when David Greene completed the fourth-and-15 pass in 2002, giving Georgia a win after Auburn had lead the entire game. In 2006, I sat through rain and a morning kickoff and watched as the Tigers' national championship aspirations were extinguished at the hands of a mediocre Bulldogs team.

Saturday night made up for all that. They say time heals all wounds, but an inexplicable win that comes out of nowhere, like a lightning bolt, does a good job, too.

When the game was over, and fans were filing out of the stadium -- this was after several minutes of standing in a state of shock -- one red-and-black clad young woman overheard an Auburn fan breathlessly exclaim, "I can't fucking believe that!" Her response: "Yeah, that was fucking nuts."

And that's it. The only words that can really describe what took place at Jordan-Hare Stadium on Nov. 16, 2013, are of the four-letter variety.