Alabama has a suffocating base defense, but an "anti-spread" adjustment makes it versatile as well.

In the 1940s, the 5-2 Monster defense was developed to stop the newly created T-formation. The five defensive lineman controlled the five offensive linemen while the two linebackers and "monster" strong safety simply mirrored the motions of the backfield. When option offenses like the Wishbone came to power by fooling defenders, the 5-2 was eventually abandoned in favor of an aggressive version of the 4-3 defense.

While serving as Bill Belichick's defensive coordinator for the Cleveland Browns, Nick Saban gained a preference for the 3-4 defense and zone blitzes. The 3-4 typically uses two-gap defenders, and the zone blitz allows a defense to be aggressive and conservative at the same time. But the last few years have presented a challenge. The spread offenses of the last decade have found ways to attack the most common defenses, including the two-gap 3-4. So, similar to the shift from the 5-2 to the 4-3 decades ago, Saban had to find ways to evolve, and those adaptations are part of what has kept his teams on top.

Defensive linemen can play one of two basic ways. One technique is to be responsible for only one gap. A gap is just a space between offensive lineman. This allows the defensive lineman to be aggressive and to get penetration into the backfield at the snap of the ball, but the linebackers behind them are vulnerable to blocks from the opponent's offensive line. This is usually the technique used in a 4-3 alignment. 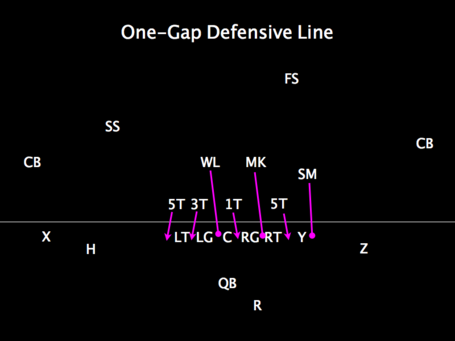 Alternatively, and in a typical Saban defense, the linemen can be responsible for two gaps. Using this technique, the lineman occupy blockers and hold their ground. They typically do not get much penetration, but the opposing offensive linemen aren't able to reach the linebackers so it is the linebackers who make the big plays. There are some teams with just the right personnel that can play one-gap to one side and two-gap to the other, but that typically doesn't happen at the college level. 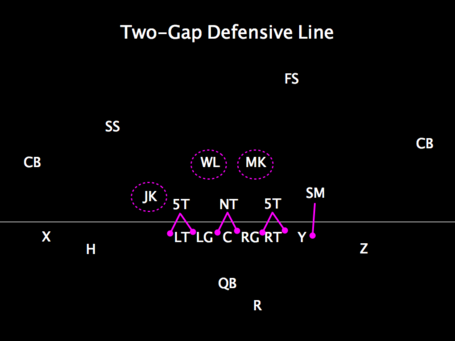 The two-gap technique is usually used in a 3-4 alignment and because there are only three defensive linemen, the offense doesn't necessarily know where the the fourth (non-blitz) rusher is coming from. If protecting the passer is difficult for an offensive line facing four pass rushers, it can be almost impossible against a blitz, particularly a zone blitz.

Aggressiveness on passing downs has been a trademark of recent Alabama defenses. Saban wants to limit the offense's success running the ball on first and second down, force the offense to throw on third down, and then go for a big sack or turnover. But shouldn't that aggressiveness open the defense to blown coverages and long scoring plays?

The zone blitz is a great way to be both aggressive and conservative at the same time. While five defenders rush the passer, six defenders drop into coverage. And while the pass defense is nearly always comprised of three intermediate zones and three deep zones, the positions, twists, and techniques of the blitzers is limited only by the coordinator's imagination. 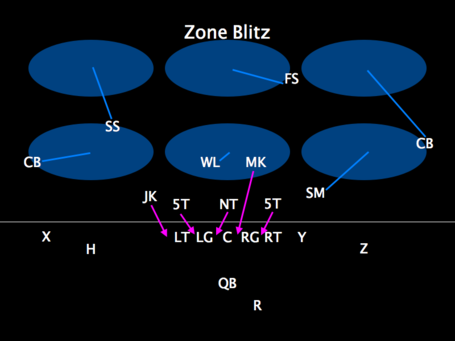 When not blitzing, the defensive backs will still play plenty of zone coverage, but it is an advanced form of it. The simplest from of zone defense is the "spot drop" technique. When using this method, each defender has a predetermined zone, or spot, to drop to and defend. For example, the safeties may defend the deep halves, the corners defend each flat, and the linebackers defend the hook/curl zones in the middle.

The more advanced zone coverage technique is called pattern reading, and the defenders play with man-to-man technique within their zones. Furthermore, the defenders communicate with each other as the receivers' routes are developing so that they can pass a receiver off to the next zone.

A defense generally numbers the opposing receivers from each sideline to the middle. In a man-to-man defense, the corner would cover the wide receiver (1), the strong safety would cover the slot (2), and the linebacker would account for the running back 3). 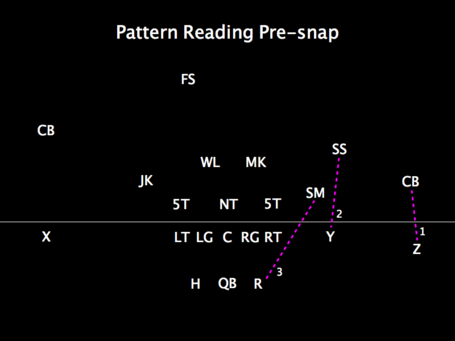 But with pattern matching, the defense waits and watches for run keys and quick pass keys. If it is apparent that neither a run or a quick pass is coming, the the defenders allow the receivers to start their routes. Once the routes start to take shape, each defender effectively plays man on the receiver that came into his zone. In the example below, the corner has the deep zone, so when the Z breaks into the curl route, he continues back to cover the Y's corner route. The strong safety and corner communicate during the play so that the safety knows he is now responsible for the curl route. Finally, the linebacker is responsible for the shallow zone and, in this example, his initial match-up with the running back does not change. 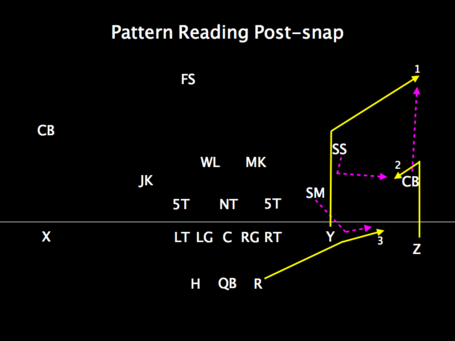 The best pattern matching teams focus on an opponent's most common passing concepts. They pick up on an offense's tendencies and learn what to expect out of certain formations at a certain down and distance on particular part of the field, etc. For example, the curl/corner route combination shown above is called "Smash" and Auburn has used it with play action and a quarterback rollout multiple times this season. I don't think Georgia was using pattern matching on this play, but they clearly had this play scouted out. The first play of Auburn's final drive, Nick Marshall faked the handoff to Tre Mason, rolled out of the pocket to his right and fired a pass to Quan Bray running the curl. C. J. Uzomah ran the corner over the top, but the defender probably saw the rollout and was ready to jump the curl route. He nearly ended the game right there with an interception.

How this affects Auburn's offense

This "standard Saban defense" is what he was running at LSU a decade ago, but the offenses in the SEC have changed quite a bit in the last 10 years. Most recently, the Alabama defense was challenged by the Air Raid offense with a prolific scrambler leading the way. That offense was enough to beat the Tide in 2012 and it scored 42 points against them earlier this season. It's safe to say that the Alabama defense did not find a way to fully answer the Johnny Manziel Problem.

It remains to be seen if the Alabama defense will have a Nick Marshall/Tre Mason problem, but this is not the first "spread to run" team Saban has faced. His standard defense has plenty of answers by itself. For example, the pattern reading coverage should easily snuff out one of Auburn's go-to pass plays, the wheel route.

The first play in this video is a touchdown pass from Nick Marshall to C. J. Uzomah. Tennessee's boundary corner blitzes, which means the safety is covering Sammie Coates. When Uzomah begins his route out of the backfield, a linebacker gives chase, but when Uzomah begins the vertical portion of his route, he just gets past the defender who has no help over top. Alabama will likely blitz corners from time to time as well, as it is a good way to contain Auburn's speed sweeps, but pattern matching would likely keep a more capable pass defender on such a deep route.

The Tigers also seem to call a tunnel screen at least once a game. This call works well against a standard blitz because the pass is thrown to the area vacated by the extra pass rushers. But with a zone blitz, sound coverage is maintained downfield. Worst of all, the area vacated by pass rushers is often filled by another defender capable of making a play on the ball himself and potentially getting a turnover.

Despite the continued effectiveness of zone blitzes and pattern reading, the Alabama defense has had to change its basic formation and gap technique to match up with spread offenses.

The reason for the shift is that offenses have been changing, so Saban must change with them. Saban's 3-4 was designed as a run-stuffing defense for traditional attacks, but teams like Texas A&M are far more likely to spread the field. "When we play a two-back team, we are in a 3-4 defense. Georgia and LSU are two-back offenses," said [defensive coordinator Kirby] Smart. "If a team is a one-back offense with three or four wide receivers in the set, we match their personnel and play nickel or dime. When we play nickel or dime, we play very little 3-4 defense out of it; we are in the 4-3 front."

The two-gap scheme that asks the linebackers to make plays works well when the ball is run up the middle because that's where the linebackers are. But spread offenses feature plenty of outside zone runs or, in Auburn's case, sweeps and veers. If the offensive line can prevent quick penetration, the run gets out of the box and its success is determined by perimiter blocking. The two-gapping linemen have little impact on the game. Using read option against either a lineman or linebacker is another way to marginalize their play, much like how the Wishbone blew away the 5-2 defenses.

Saban's defensive playbook from LSU said, "Against the run, we will not allow the ball to be run inside. We want to force the ball outside." That clearly was not the case against Ole Miss. The defensive tackles tried to shoot through their assigned gaps and tried to get penetration up the middle but it was the defensive ends' play that indicated the change in focus. The ends constantly wheeled outside and upfield, taking away the outside runs and forcing the Rebels to run inside.

On paper, the standard Alabama defense should be able to handle the Auburn passing game. It is tough to get favorable match-ups against pattern reading defenses and zone blitzes are always tricky for less experienced passers.

But how will Alabama treat this Auburn running game? Auburn fits into both of Kirby Smart's categories. The Tigers' base formations are two-back formations with a great running back and a real H-back/fullback, but there are three wide receivers as well. So does Alabama keep using its standard two-gap 3-4 defense and risk getting burned outside by Corey Grant/Ricardo Louis sweeps and Nick Marshall keeps? Or does it use the one-gap nickel defense with charging defensive ends to force the ball into Tre Mason's arms up the middle?

Using the one-gap scheme worked well against Ole Miss because their read option game is a little limited. Generally speaking, the best Rebel running back, Jeff Scott, is an outside threat. They use quarterback Bo Wallace for an inside run presence, but he is not a dynamic ball carrier. Auburn does not have these limitations. Nick Marshall is a running threat outside, but most importantly, Tre Mason is should be able to make the defense pay if they force the carries inside.