A big day could be in store for Auburn's Nick Marshall, while Tennessee's Josh Dobbs is still climbing the learning curve.

Share All sharing options for: Auburn vs. Tennessee preview: Breaking down Nick Marshall vs. Joshua Dobbs

Tennessee quarterback Joshua Dobbs got his first start last week in Columbia against the Missouri Tigers. He reminded me of what Nick Marshall looked like early this season. He rushed some throws and overthrew some receivers early, but in the second quarter, he showed accuracy on some seam and post routes when given time in the pocket. Like Marshall in his first few games, he rarely kept the ball on any read-option plays, but showed some wheels when he did keep it.

On the other side of the ball, Missouri quarterback Maty Mauk not only threw for 163 yards and three touchdowns, but he was also the Tigers' leading rusher with 114 yards. Some of those yards were gained on scrambles, but Mauk showed that this Volunteer defense is susceptible to quarterback runs. The Vols are last in the SEC in rushing defense, after all.

Will Dobbs' 1st home start be any better?

Dobbs first saw the field in the second half two weeks ago against Alabama. With the game already out of reach, he was part of two scoring drives while completing 5-of-12 passes for 75 yards. Against Missouri, there was an uptick in accuracy, but his yards per attempt fell by half a yard and he threw two interceptions. His night ended with 26 completions out of 42 attempts for 240 yards, but he also gained 45 yards on seven rushes.

In the first quarter, with no score for either team, Tennessee had reached the Missouri 36, mostly due to great starting field position and a coupe of Marlin Lane rushes. The Volunteers were hoping to at least reach field goal range and strike first, but they needed at least one more first down.

On third-and-5, two Tennessee receivers ran the Mesh concept and tried to get in the way of each other's man defender. But there were two problems. First, Missouri was playing zone defense, so instead of running away from their defenders, the receivers were just running from one zone to another. 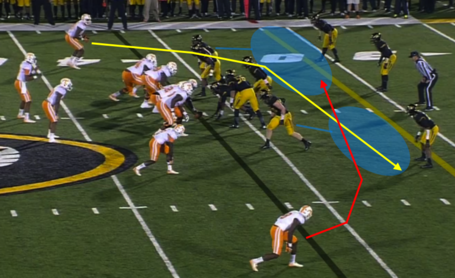 Second, Missouri got pressure on Dobbs quickly, forcing him to throw before his receivers were even looking for the ball. They did this by having six defenders near the line of scrimmage with all but one standing up. This made it hard for the offensive line to know who was blitzing and who was dropping back into coverage. Though only four Tigers rushed the quarterback, two of them reached him almost immediately after the snap. 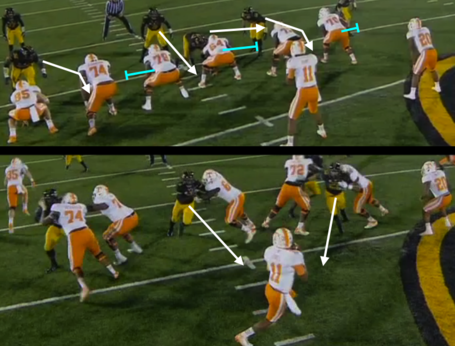 Rather than try a long field goal or risk punting into the end zone, the Volunteers went for it on fourth down. Tennessee had two receivers running curl routes, and both were open, but Dobbs simply overthrew his man and the ball was suddenly Missouri's. The Tigers would score on that possession and never look back.

At the end of the first quarter, on first-and-10 from the Missouri 48, Dobbs and Marquez North did their best Marshall-Coates impression with a pass down to within in the 15, but they weren't able to connect. Either the ball was just overthrown, or North gave up too early, or something. As Marshall and Coates have shown, the quarterback and his receivers need to have a certain amount of chemistry for those big plays to work. This was one example of Dobbs not quite having that experience built up with his receivers.

Two plays later, on third-and-11, Tennessee called a three-receiver passing play. This kept seven players back for protection, but Missouri only brought three and dropped eight into zone coverage. 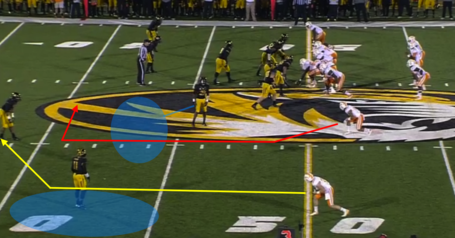 Dobbs had his eyes on the two-receiver side as soon as he received the snap. The outside receiver was running a post and the slot receiver was running a dig, but there were three zone defenders in that space to cover only two offensive players. Dobbs fired the ball right at one of those defenders, and only his strong arm saved an interception because the ball bounced right out of the defender's hands.

It took Marshall a few weeks into the season to get some touch on his passes and build some chemistry with his receivers. Dobbs was able to make some good passes here and there, but he was never consistent enough to lead a touchdown drive. How quickly Dobbs can improve as a passer with six quarters of experience remains to be seen.

Can the Volunteers slow down Marshall?

Tennessee head coach Butch Jones commented specifically on Marshall's dynamic play this season, calling him "the X-factor." As the season has continued, Marshall has become more and more comfortable keeping the ball taking off downfield. He isn't a bruiser and he won't outrun an entire defense, but he can quickly get 5 to 15 yards and loosen up any overloaded boxes trying to slow down Tre Mason or Cameron Artis-Payne.

When Tennessee played Missouri, they faced a similar threat in Mauk. He ran 13 times for a total of 114 yards. That's 8.8 yards per carry. The only time Marshall has run for that many yards was when he gained 140 against Ole Miss. Many of Mauk's yards on the ground came from scrambles when he couldn't find anyone open downfield. But there was at least one called quarterback run, and it proved to be an effective way of attacking the Tennessee defense.

In the middle of the second quarter, the Tigers only led by a touchdown. Facing third-and-2 from the Tennessee 31, Missouri lined up in a unique formation. Three receivers were to the right and a tight end was to the left, but the left tackle was on the right side creating an unbalanced line. Tennessee responded by showing a 4-3 look with one high safety. 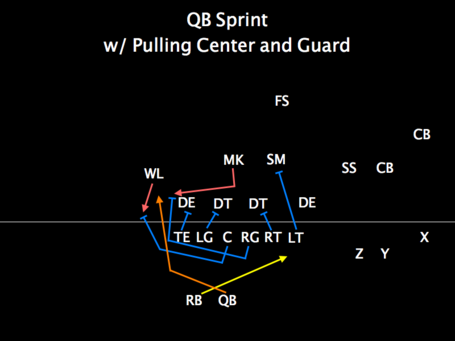 At the snap, both the center and right guard pulled to the left while the tight end and left guard blocked down, or away from the play. One linebacker was easily kicked out by the, center and the pulling guard sealed off another. The defense was easily outflanked, and only the deep safety saved a touchdown.

Auburn has used plenty of quarterback runs with similar angle blocking concepts, most notably the Inverted Veer with Power O blocking. Quarterback keepers out of the diamond formation would accomplish the same thing by having two lead blockers to one side. But if the coaches want to preserve Marshall some due to his injuries, Mason, Artis-Payne and Corey Grant should be able to handle the load themselves. After all, even without Mauk's contributions to the running game, Missouri still racked up 225 yards on the ground.