Three drives in the middle of the third quarter marked the turning point in the SEC title game.

Though Auburn ended the game with a 17-point victory, Missouri never trailed by more than eight in the first half of the SEC Championship Game. The Other Tigers pulled to within one just before halftime, and it looked like the team with the ball last would be the one to win. In the middle of the third quarter, Missouri scored to take a three-point lead, but the next three drives turned the game in Auburn's favor for good.

This was just a broken play as Marshall and Mason didn't go the same direction, but Marshall was able to make one man miss while the offensive line prevented anyone from even crossing the line of scrimmage 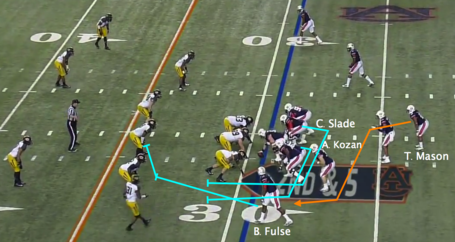 Auburn ran a sweep to the boundary. Running such a wide play to the short side of the field can be difficult since the back needs room to get around the edge, but Missouri was overly aggressive, and when Mason saw that the defense had overpursued, he was able to cut back inside before reaching the sideline.

The non-pulling linemen (Greg Robinson, Reese Dismukes and Avery Young) held their blocks perfectly with the help of Jay Prosch. Brandon Fulse came in from his wide receiver position and blocked two linebackers himself. Alex Kozan kicked out the cornerback, and Chad Slade got his hands on the backside linebacker who had pursued the play from the other side. A deep safety made the tackle, but only after a gain of 19 yards. 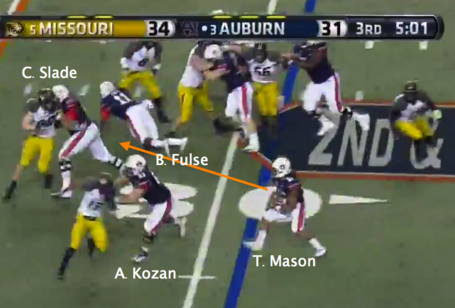 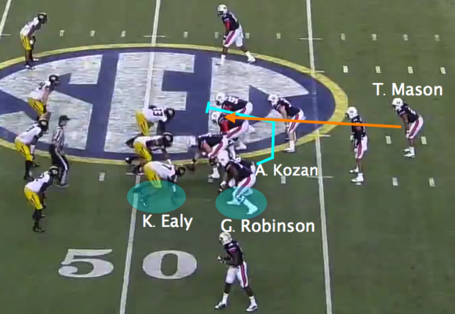 Power was called next, with Prosch kicking out a defensive end and Kozan pulling around to lead block for Mason. Missouri was able to disrupt the intended running lane pretty well, but since Robinson had destroyed his man, there was a big enough cutback lane to gain 6 yards. Notice how far away Ealy and Robinson are from their original positions. 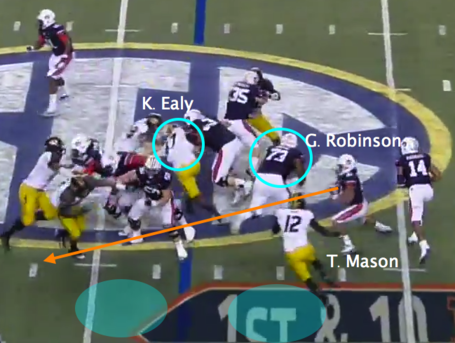 Power was followed up with counter, where the the H-back and pulling guard essentially swap responsibilities. It wasn't too effective since defensive lineman Markus Golden shot through the gap vacated by Slade. Young was not able to reach him before he brought down Mason. 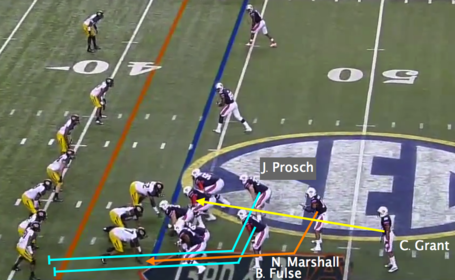 Mason tweaked his ankle or something and headed for the sideline after the previous play, so the Tigers showed the diamond formation with Corey Grant as the tailback. Auburn ran the zone read with two arcing blockers. When two linebackers focused on Grant running up the middle, Marshall saw that there was only one defender out wide. He knew he had two blockers headed that way, so he kept it. Prosch destroyed the cornerback while Fulse looked around for someone to block. Marshall juked the safety out of his shoes, raced down the field and reached the 2-yard line before being dragged out of bounds. 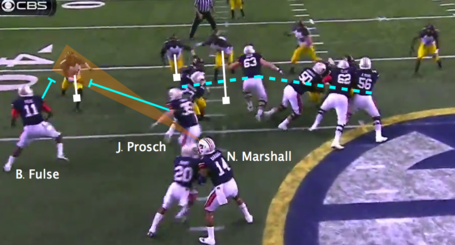 Why didn't Fulse have to block anyone to spring this play? Well, not only did the Other Tigers' linebackers attack the middle, but they also had a man defending Melvin Ray in the slot. In this formation, however, Ray is covered up and is not an eligible receiver. Auburn used a formation that fooled Missouri into effectively taking a player off the field.

Auburn quickly gets to the line in the same formation and runs the same play, but Marshall hands off to Grant this time. The backside defensive end forced the give by quickly getting in the backfield. Also, a linebacker and safety scrape to the outside to protect against another Marshall run. So Grant takes the ball and has a big lane thanks to Kozan and Dismukes. Missouri linebacker Andrew Wilson was ready to fly through the running lane, but Kozan gave him a little one-armed shove. This is just enough of a block for Grant to squeeze around Wilson and reach the end zone before being tackled. Auburn was back ahead by four. 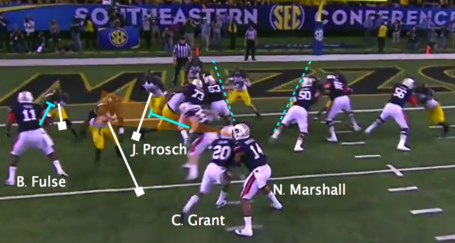 Henry Josey rushes up the middle for 4 yards

Missouri ran a simple inside zone run out of a 2x2 spread formation. The offensive line was supposed to get double-team blocks on defensive linemen and then block linebackers downfield. They never made it to the linebackers. In fact, defensive tackle Kenneth Carter rerouted the run a bit by shoving his man back 2 yards after the snap. Meanwhile, Montravius Adams absorbed two blocking linemen by himself. This allowed Anthony Swain to make the tackle. 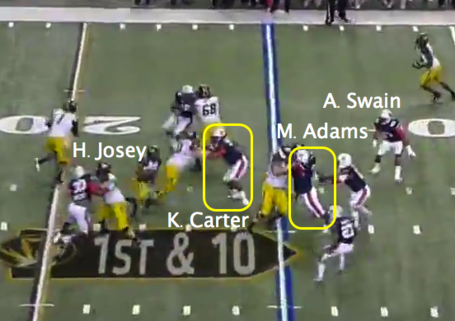 Henry Josey rushes up the middle for -2 yards 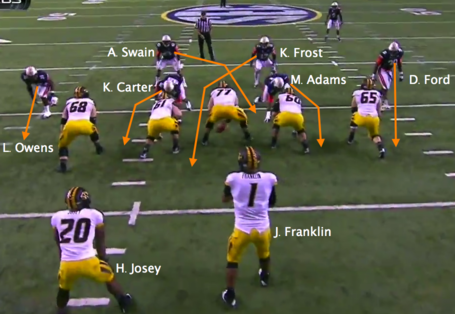 The Other Tigers tried the inside zone again, but Auburn had a run blitz ready to go. There were five linemen, so there were six gaps to control, and Auburn sent a man into each one. Kris Frost broke through almost immediately but he wasn't able to get a hand on Josey at first. Fortunately, the other defenders held their gaps perfectly and Frost was able to recover and make the tackle from behind. 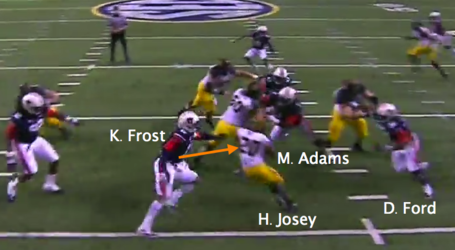 After a false start penalty, the Missouri offense faced an obvious passing down. Ellis Johnson had had some success by blitzing on passing downs, so Missouri tried a screen pass, but the pass was off target and receiver could not make the catch. It turns out Auburn was playing zone anyway and may have been able to prevent a first down, even if the pass was caught. Missouri had to punt the ball back to Auburn, down 38-34. 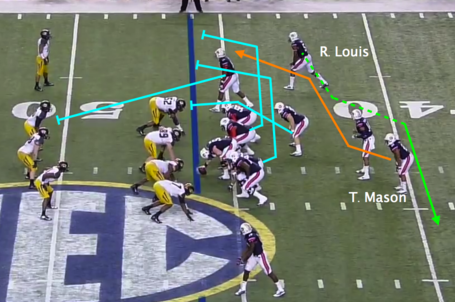 Auburn called for another sweep to the boundary, much like the second play of its previous drive. The only difference is that Ricardo Louis faked an end around, which occupied a couple of defenders.

The Tigers used counter for each of these plays. On the first one, Mason was tackled by the umpire, and on the second he was tackled by Wallace, who was able to shed a Greg Robinson block.

Cameron Artis-Payne rushes up the middle for 21 yards

Artis-Payne came in for Mason and Auburn went back to the zone read. Missouri had six men in the box with the linebackers standing right at the line of scrimmage. At the snap, Marshall read the backside defensive end while the other five defenders were successfully blocked by Auburn's five offensive linemen. A safety made his way down once Artis-Payne received the handoff, but Prosch was ready to block him, too. Eventually, the other safety made a stop after 21 yards. 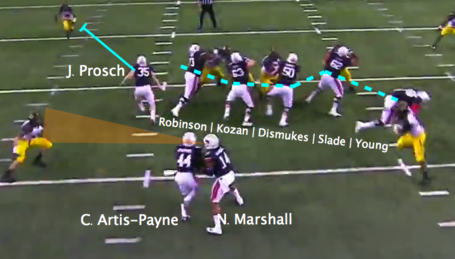 After the previous play, Gus Malzahn started his "wheels on the bus go 'round and 'round" signal. Auburn hurried to the line and ran the same play. This time, the Missouri defense showed a less aggressive formation with the linebackers at a more traditional depth. This would put them in better position to tackle a runner who got through the initial line of defenders.

Marshall handed the ball off to Artis-Payne up the middle again. The offensive line did not do him as many favors on this play as he had to dodge two tackles in the backfield. But once he escaped, Louis had a nice block for him 5 yards downfield. Finally, Artis-Payne gave a nice fake to the right that made the safety lose his balance for just a moment. He then cut back left, and that was all he needed to reach the end zone.

This put Auburn up by 11. Missouri would score on its next drive to pull with three, but it would not touch the ball again within one score. In the fourth quarter, Auburn scored two more touchdowns to win 59-42.