This week's Undercover Barner attempts to describe the indescribable. And fails. But she tried.

Share All sharing options for: Undercover Barner: Loosing the Albatross

The most memorable second in college football actually took 18.

From the moment the ball left the foot of Alabama back up kicker Adam Griffith to the moment Chris Davis crossed the opposite goal line with it to win the 2013 Iron Bowl, just 18 seconds elapsed. It may have felt like more or less, depending on the colors you were wearing or your level of sobriety. But in reality, it took only 18 seconds for Davis to become a bona fide legend and to loose 2012’s albatross from around Auburn’s neck.

If there’s one thing sportswriters love, it’s a good narrative. People like to place things into boxes and fit them neatly along storylines. After Auburn’s miracle finish against Georgia set up the "Mother of all Iron Bowls," the Auburn storyline we heard over and over was one of redemption and revenge. Redemption, of course, for Auburn’s disastrous 2012 campaign and revenge against Alabama for winning four of the last five Iron Bowls, particularly the blowouts in the previous two years. I think they got it half right.

To Auburn, I think the 2013 Iron Bowl was much more about redemption than revenge. This game was about proving that 2012 was an anomaly. It was about not shying away from a fight. It was about going toe-to-toe with a national powerhouse, taking some hard licks and coming away victorious. That the national powerhouse was Auburn’s biggest rival is not lost on me. I recognize that the Tide outscoring Auburn 91-14 in the previous two matchups gave Auburn ample motivation to knock the Alabama off its pedestal. But I also think there was something bigger at play.

It’s not a perfect analogy, nothing like Aubielicious’ brilliant suggestion in the College and Mag Show that this Iron Bowl was Ocean’s Eleven, but the unmitigated disaster of 2012 became the albatross Auburn was forced to wear. It was a haunting reminder of Auburn’s past and as some suggested, a punishment for its sins. Throughout the 2013 season, people have doubted the Tigers’ ability to compete on a national stage, especially in the SEC. An 0-8 SEC record during the previous season will do that. But these Tigers won’t be denied. These Tigers aren’t the 2012 team with only a new coach and quarterback. They are faster, meaner, better. These Tigers believe in themselves. The writing had been on the wall since Auburn beat Texas A&M, but Davis’ coast-to-coast sprint to defeat the mighty Crimson Tide finally cast that damn albatross to the ground. Auburn finally exorcised its demons.

I didn’t get to watch most of the 2013 Iron Bowl. I mean, I heard it, but I didn’t see it. Due to a significant lack of income, I was unable to afford one of the outrageously priced tickets. After beginning Saturday by high-fiving our entire team at Tiger Walk*, I planned on watching the game in the official "War #Drunj Eagle presented by CollegeAndMagnolia.com" tailgate**. If I couldn’t be inside Jordan-Hare for the "Mother of all Iron Bowls," I was at least going to be 500 feet from it, among some of my dearest friends.

Ultimately, it didn’t work out that way. Through a series of events that I take all the blame for, a few invited Alabama-fan guests did a little trash-talking, and I made the decision to remove myself from the tent before I said something I’d regret. It’s irrational and extremely immature, but I live with Alabama fans everyday. Auburn is my happy place, and I wasn’t willing to share it with them, not for that game. So we went back to Opelika to watch the game at my parents’ house. During the time we were watching the game on CBS, Alabama completely shut down Auburn and amassed a 21-7 lead. I remember lying in a recliner in the fetal position and being able to feel the shape of my heart as it throbbed inside my chest. Yep, this was the Iron Bowl.

When it was discovered that a phone was left at the tailgate, I welcomed the opportunity to escape Verne and Gary and to commiserate with Rod and Stan during the drive back to Auburn. En route to retrieve said phone, Auburn finally scored to bring the game within 7 points and held Alabama to take it to the half. After the half, and while we were still driving, Auburn scored 7 more to tie the game at 21-21. It was at that point I made the executive decision that under no circumstances were we leaving that truck.

So for the entire second half, we drove around Lee County, never taking the same road twice***. We listened to Rod and Stan, our spirits rising and falling with the them and with the Tigers. Whenever we passed a window with a visible TV****, we averted our eyes because our eyes on a television screen spelled bad news for Auburn.

We were going down Gateway Drive by TigerTown when A.J. McCarron plunged a 99-yard knife through Auburn’s heart. We were on Gay Street by Tiger Rags when Auburn failed to convert fourth-and-1. We were driving down County Road 072 when Nick Marshall connected with Sammie Coats on the perfect read with about 39 seconds left to tie the game. And we were on North Donahue Drive, just down from Yarborough Elementary School, when we heard the most amazing 18 seconds any of us could ever imagine.

The rest of the night was a blur of running, War Eagling and throwing toilet paper on everything in sight. Dejected Alabama fans wandered away from campus, many still in shock. The next morning, on the corner of Miller and College, I found a torn ticket***** on the ground in several pieces. I can only imagine a disgruntled Tide fan on his way to anywhere not-named-Auburn stopped to wait on traffic, took the ticket from his pocket, saw Cam Newton’s smiling face and tore it up in a fit of rage.

I kept the ticket.

Back when the idea of beating Alabama seemed much more like a pipe dream than an actual possibility, before I believed, I said that if Auburn upset Alabama in the Iron Bowl, this post-Iron Bowl column would be nothing but HAHAHAHAHAHA all the way down the page. And trust me, I wanted to do it. I’d always said when Auburn managed to beat Alabama again, I’d be the most insufferable tool anyone could ever meet. But I just don’t have it in me. I’m not that girl. #HateWeek, for all its jokes and trash-talking, mostly consisted of internal seething for me. The audacity and arrogance of some people never ceased to amaze me, but I kept telling myself that I had a long memory and would remind them of their hubris when the chickens came home to roost. But all I really have is the one sentiment we’ve been trying to convey all along:

You’re not better than us.

And that’s going to have to do.

The 2013 Iron Bowl was a hell of a game, a heavyweight fight for the ages. To casual observers, the momentum swings were probably really fun to watch. To those of us with a dog in the fight, it was 4 hours of sheer misery that resulted in equal parts ecstasy and heartbreak. But that’s what makes live sports so magical: the pageantry, the drama, the raw emotion. Despite what some may think about SEC fans, we’re fully aware of how ridiculous we are. We just don’t care. And I wouldn’t want it any other way.

So now what? Auburn travels to Atlanta this weekend to take on a team none of us really know anything about. The Missouri Tigers have laid waste to most of the East, with only South Carolina being able take them down (but needing double-overtime to do it against Mizzou's backup QB). They have scary receivers and a pretty good starting quarterback. Their mascot is a Tiger. That is the extent of my knowledge about this team. But I do know that there are plenty of reasons to be nervous about this game. After such an emotional win in the Iron Bowl, I worry about a hangover in the Dome. Plus there’s the talk of one-loss Auburn jumping an undefeated Ohio State team with an SEC Championship Game win. I hope that Gus and company know how to keep the team focused on the task at hand, winning the SEC championship******. I think opening as the underdog despite having defeated the No. 1 team in the country might give them some extra motivation.

If you’re traveling to Atlanta to see the SEC Championship Game that negative-no one predicted, please know that I will be living vicariously through you. Finals are finally upon us here in Tuscaloosa, and all good things in life must cease.

Thank you for believing in Auburn and for reading this column every week, guys. It is, was and always will be great to be an Auburn Tiger.

*I got to high-five Nick Marshall and tell him to hit 'Bama in the mouth: 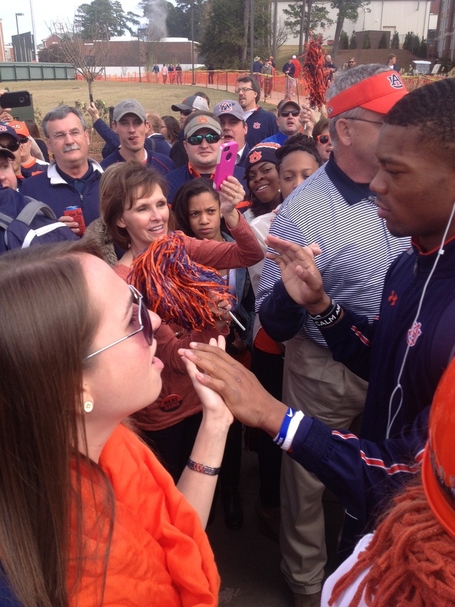 I got to high-five my child and not tell him anything because I was in awe. I grabbed Kodi’s shoulder because I couldn't help it and then died a little inside. I touched Dee Ford. And Carl Lawson. If anything can make you feel like a little kid, it’s seeing these guys in person. Tiger Walk is unparalleled, and I'm so glad we got to go before this game.

**We don’t know how that name fits on the sign either.

***Bud Light is right: It’s only weird if it doesn’t work. It worked.

****I didn’t really think about it at the time, but further reflection and recounting this story have brought it up: Auburn and Opelika were ghost towns without another soul on the road. And every visible TV was tuned to the game. I imagine it was the same throughout the state, and as the game progressed, throughout the country. That’s pretty freaking cool.

******Auburn. The team that didn’t win an SEC game at all last year. Auburn won the West and will play for an SEC championship on Saturday. Wow. Just wow. Gus made them believe they’re "going like this." //does that thing Gus does with his hand where he pretends it’s a plane. Onward and upward, Tigers.