Missouri's offense is perhaps the most "authentic" spread offense Auburn has seen this season.

Share All sharing options for: SEC Championship Game 2013, Auburn vs. Missouri preview: The Other Tigers offense

Seeing the Missouri offense quickly reminds you that it was previously in the Big 12. The formations almost always have the quarterback in shotgun with four wide receivers. Occasionally, a tight end will replace one receiver, but there is never more than one running back. The offense seems to focus on quick passes that set up deep throws and, if the defense drops too many players into coverage, quick runs by the quarterback or running back can make them pay.

If the offense is passing that much, it must have several passing concepts. I saw Missouri using four verticals, smash, levels, deep crosses, and switch, but what I found particularly interesting was its use of double routes, or two adjacent receivers running the same route.

In general, to run the slant, the receiver takes a few steps forward and then breaks inside at about 45 degrees. This route is difficult to cover for the defender because the receiver quickly gets inside position and is able to shield the defender with his body. The biggest threat to a slant is another defender further inside.

By running double slants, the threat of this inside defender can be eliminated. The No. 1 receiver (numbered inside-out) simply runs his route, which pulls his defender further inside. This creates a big window for the No. 2 receiver, so as long as he can beat his defender, he should be open. 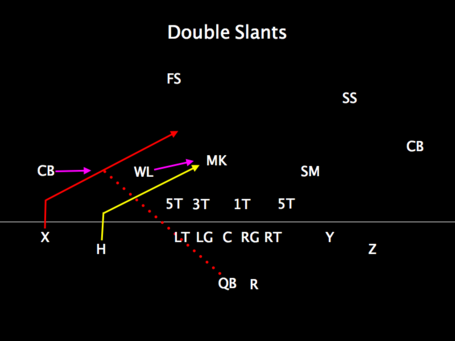 A post is a basic deep route that starts with the receiver racing downfield for 8 yards or so before breaking inside at a 45 degree angle. A skinny post is the same, except that the angle of the break is not a sharp. A post route for a wide receiver is great against Cover 2 or any "middle of field open" defenses because the receiver should get open in the space between defenders. If faced with a "middle of field closed" defense, like Cover 3, then double posts should help. 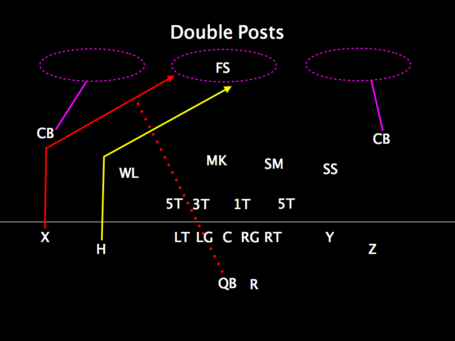 Double ins works much like double slants. The No. 2 receiver runs away from his own defender while the No. 1 receiver draws the other defender away. Double outs coupled with a fade route works by making the defense cover a horizontal and vertical stretch at the same time.

The No. 2 receiver's out route and the No. 3 receiver fade create the vertical stretch, while the pair of out routes together create the horizontal stretch. This is not unlike the snag concept with corner, flat and mini-curl routes. One advantage the double-outs concept has is that the receivers catch the ball on the run rather than standing still, like with the curl. Also, the curl is only effective if the receiver can settle between zones in the defense. Alternatively, the out routes should still get open against man coverage. 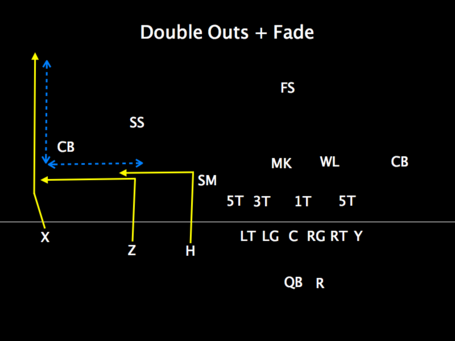 With two or three receivers to each side of the formation, nothing keeps Missouri from calling one concept to the left and another concept to the right. By calling the plays this way, the offense can be prepared for Cover 2 and Cover 3 at the same time. Or maybe it has a way to attack a zone defense and a man-to-man defense. Finally, with the ever-present threat of a run by quarterback James Franklin or running back Henry Josey, this offense is incredibly versatile and powerful.