Final BCS standings 2013: Auburn No. 2, will play No. 1 Florida State in Pasadena

As expected, the SEC champion Tigers will play for their third national title.

Share All sharing options for: Final BCS standings 2013: Auburn No. 2, will play No. 1 Florida State in Pasadena

After Auburn's win over Missouri in the SEC Championship Game and Ohio State's loss in the Big Ten Championship Game, the Tigers were essentially a lock for the BCS Championship Game. That became official Sunday night, as Gus Malzahn's team rose to No. 2 in the final BCS standings of the 2013 season. It will take on No. 1 Florida State in Pasadena, Calif., on Jan. 6 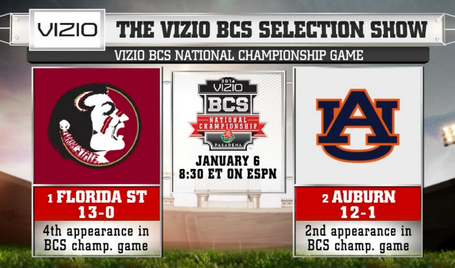 Can you believe it?

Florida State opened as a 6.5-point favorite over Auburn, and the line has since moved even more in the Seminoles' favor. FSU is making its fourth appearance in the BCS title game, looking for its second win. The Tigers are set for their second title shot, hoping to win a second in four years after the undefeated 2010 campaign. The teams will square off Jan. 6, 2014, at the Rose Bowl. Kickoff is set for 7:30 p.m. CT, and the game will be broadcast by ESPN.

"Well, they're big-time on offense -- I mean, they can throw it, they can run it," Malzahn said when asked about the matchup against FSU during ESPN's BCS Countdown show. "They got one of the better defenses in college football. So we've got our work cut out for us. They're good on both sides."

Alabama, Michigan State and Stanford rounded out the top five of the final standings.