The Tigers' 2013 recruiting class is shaping up to fill team needs and inject talent into the roster.

We are merely days from National Signing Day 2013, and teams are putting the finishing touches on their classes and looking to add the final remaining pieces to complete their puzzles. Now would be a good time to recap Auburn's team needs.

Remember, these are just the minimum needs for this class as we head toward the 2013 season. With a new coaching staff in place, and new schemes to plan for, needs may have changed from last year when the recruitment for this class took off. Anything beyond minimum needs is always up to the discretion of the coaches. However, this year, in the midst of a coaching transition, best available talent may outweigh even the team needs. Relationships must be forged quickly, and filling gaps with quality talent may be of more importance than getting a given position to a certain number. It takes on a quality over quantity approach in this respect.

These numbers are purely estimation. They are sure to prove inaccurate as the offseason progresses and possible attrition occurs. 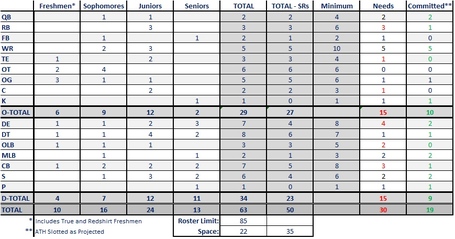 Quarterback: With the departure of Clint Moseley, Auburn will return just two scholarship quarterbacks for the 2013 season. Therefore, taking a quarterback is definitely a need and a priority. Most schools prefer to carry at least three or four QBs on scholarship. Auburn currently has commitments from Jeremy Johnson and two athletes for the 2013 class. One of the athletes, Nick Marshall, is a JUCO prospect who played the position last year, while the other, Jason Smith, will get a look at QB, but projects as a WR on the next level. Even though the position need has been filled, it will likely be a priority once again next year.

Skill (RB/WR/TE/H-Back): The minimum here is generally considered to be 20. Auburn expects to return 12 skill position players for the 2013 season barring further offseason attrition. Thus, a minimum of eight skill recruits should be brought in. But within this, a look at specific positions is also needed. Gus Malzahn's offense relies on a solid running game to open up the passing game. His version of the spread will utilize a number of receivers and runningbacks. Therefore, Auburn needs to have at least six runningbacks/fullbacks on scholarship. Malzahn does not use a true tight end often, opting more for an H-back role combining the traditional fullback and TE roles, so four tight ends are a reasonable requirement. For most spread offenses, ten receivers is the bare minimum. Auburn currently has four offensive skill players committed, six if you count the likelihood of two committed athletes finding their way to the receiver position. The Tigers grabbed a big back, Cameron Artis-Payne, from the JUCO ranks and are very much in the mix to add a second and even possibly a third running back to the 2013 class, thus filling the needs for this year. Running back and receiver will both be priority positions next year.

Offensive Line: 15 is the minimum here under most circumstances. Auburn is young along the offensive line after a massive haul in the 2012 recruiting class and will return 13 players next season. So, offensive line is not a major need for Auburn this year. Breaking down the specific position needs a little trickier along the O-line. The 2012 class was heavy on offensive tackles, so the need falls more toward the interior line. The Tigers have already dipped into the JUCO ranks for a guard prospect, Devonte Danzey, and are considering possibly adding one more to fill out the class.

Defensive Line: 15 is typically the minimum here for a four man base front, evenly distributed among ends and tackles, and Auburn will return 13 defensive linemen in 2013. Defensive line play is part of what sets the SEC apart from other conferences, so this is a key area of focus. Technically, Auburn only needs to bring in two defensive lineman. However, with five rising seniors along the line and last year's anemic production, Auburn will bring in more than the minimum needed here. The Tigers have three already committed (Ben Bradley, Carl Lawson, Tashawn Bower) and are in the mix to add a couple more. So far, Malzahn and co. have looked to the JUCO ranks for tackle depth (Bradley) and have commitments from a pair of end prospects (Lawson, Bower) that could make an impact right away.

Linebacker: The minimum here is generally eight in a 4-3 defense, but new defensive coordinator Ellis Johnson bases out of a 4-2-5. Auburn will only return five linebackers, with one a rising a senior. The minimum here should be three. Auburn has two currently committed, including a JUCO linebacker, Kenny Flowers, who should add immediate depth, and the Tigers would certainly like to add one more for the 2013 class. Either way, they will look to recruit the position in 2014.

Defensive Back: A minimum of 14 defensive backs is typically desired and Auburn looks to return 13. However, with Johnson's 4-2-5 the safety role is expanded, and the Auburn coaches may want to carry a higher number here. The bare minimum Auburn will need to bring in looks to be just one, but expect the coaches to look for more. The Tigers currently have three committed for the 2013 class consisting of one corner (Kamryn Melton) and two safeties (Khari Harding, Brandon King). The Tigers are in the mix for a couple of DB prospects to help round out the class.

Special Teams: Teams generally want to have a kicker and punter on scholarship at all times. Matchups are won and lost with the kicking game, so these positions have become increasingly more valuable. This is not an immediate need at the moment; however, with both of Auburn's current special teamers being seniors for the upcoming season. The Tigers have dipped into a deep 2013 talent pool and secured commitments from two of the nation's best (punter Jimmy Hutchinson, kicker Daniel Carlson). 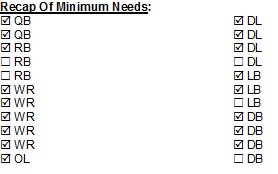 Please keep in mind that the coaches must also take into account the available scholarships and the 85-man roster limit. For Auburn, a small senior class would have limited the number of signees the Tigers could bring in with the 2013 class prior to some expected attrition following the coaching change. Looking ahead, that issue could pose a major obstacle for the 2014 signing class.

Below is Auburn's current commitment list. Ratings used in this list are from 247Sports's composite rankings*. Auburn is currently sitting at 19 commitments, including the three early enrollees. It is possible the Tigers could bring in as many as 27 in this class, leaving open eight spots to fill in the coming days, assuming no defections.