Auburn vs. Alabama results: 49-37; WHAT A WONDERFUL WORLD

Share All sharing options for: Auburn vs. Alabama results: 49-37; WHAT A WONDERFUL WORLD

It's been a dark couple of years for Auburn's major athletics programs, as the Tigers have routinely found themselves on the short end of the stick against arch rival Alabama. But on Wednesday night, the Auburn basketball team polished off the Crimson Tide, 49-37, ending a six-game losing streak this season and a five-game skid in the series against the Tide.

Auburn didn't score a point until seven minutes had elapsed. The Tigers trailed at one point, 15-2, and they faced a 23-13 halftime deficit. Frankly, Auburn looked as bad as it has in the Barbee era during the first half. The Tigers made 3-of-23 -- 3-of-23 --shots from the field in the first 20 minutes, and Frankie Sullivan hit only 1-of-13 shots from the floor for the entire game. Sullivan was trying to do much himself forcing the pace in transition only to miss a wild shot or throw away a bad pass. The rest of the Tigers were totally anemic from the floor and too often committed bad turnovers thanks to Alabama's pressure defense. Going into halftime, it appeared that Auburn would be lucky to finish the game with 40 points.

Unfortunately for Alabama, the Crimson Tide didn't bury Auburn in the first 10 minutes when it had a chance. Yes, the Tigers were playing their worst game of the season, but the Tide weren't that much better. A whopping 23 points at halftime is nothing to write home about, and neither is a 33.3 shooting percentage, which 'Bama had in the first 20 minutes. Yes, Alabama was playing solid defense and forcing turnovers, but too many fouls allowed Auburn to get to the free throw line eight times. The Tigers made six foul shots, which accounted for nearly half of their offensive output.

After a 14-point loss at Missouri Saturday -- Auburn's sixth in a row -- that wasn't as close as the score indicated, Barbee said he was embarrassed to be coaching his team, and he called out his seniors for a lack of leadership. Considering the losing streak it was hard to blame him.

"Our defense, our offense, special teams," Barbee said, allowing himself a small joke at his own expense. "Everything, not very good. And that's on me. When I watch the tape, I told the guys I'm embarrassed to say I coach this team, and the majority of it is on me. My fault."

"It was a little bit of fool's gold, because I thought our leadership was strong enough, having been through it," Barbee said. "I was fooled into thinking that this senior group, this veteran group had got it. They hadn't. They slipped right back into their old habits - losing habits."

If the Tigers' play against Missouri embarrassed Barbee, the first half against Alabama must have been more than he could bear. Auburn has been more of a second-half team at times this season, and the head coach has mostly done a good job of making adjustments and motivating his team before it exits the locker room. There's no telling what Barbee said during the intermission Wednesday. He may have peeled the paint off the walls, but considering how much Auburn tried to force its play in the first half, it wouldn't be a surprise if Barbee took a more calm, tranquil approach. Whatever he did, it worked, and his players responded.

The Tigers came out in the second half with more energy and more effort, and it immediately paid off. Auburn went on a 20-3 run over the next 11 minutes and 37 seconds to turn a 10-point halftime deficit into a seven-point lead. Barbee's players calmed down on offense, and stepped up the intensity on defense. That resulted in Alabama, which hadn't been shooting well anyway, not being able to get much of a decent shot at all. And because the Tigers were actually running their offense and handling Alabama's press, they were able to shoot better and avoid turnovers, keeping Alabama from scoring in transition, its one real offensive strength in the first half. Rob Chubb, Asauhn Dixon-Tatum and the rest of the team finally took advantage of Alabama's inability to rebound, and they took away the Tide's second chance opportunities.

Of course, while all this was happening, the student section was being led by a pretty noteworthy cheerleader. 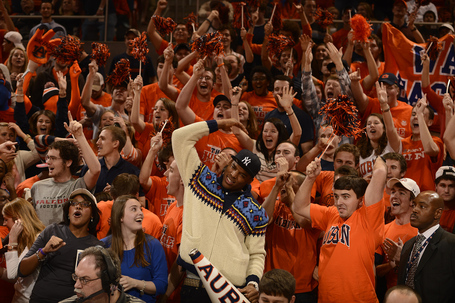 Cam Newton, the man Bammers love to hate, the man Bammers said would never be back to the Plains, was in the front row cheering against the Tide. As Auburn continued its run, Cam and the rest of the students were worked into a frenzy, and by the time Newton made a guest appearance as the celebrity N, Auburn Arena was clowning so hard, one may have thought the circus was in town.

While Alabama failed to pull away during Auburn's first-half struggles, the Tigers went for the throat as the Tide faltered down the stretch. Auburn shot 57.1 percent in the second half, knocking down 12-of-21 from the floor, and the Tigers finally took advantage of Alabama's shaky front court, as they only took four threes. Senior guard Josh Wallace ran the show, slicing through the lane again and again to finish with 11 points, including 5-of-6 shooting from the free throw line. After one late basket, SEC Network color man Joe Dean Jr. sounded like he was almost overcome with emotion as he praised the former walk-on's performance in spite of a lack of size and overwhelming talent.

Wallace played with a ton of heart, and he finished with a nice line of 11 points, two assists, two rebounds and one steal. Allen Payne also came up big for the Tigers, contributing 11 points, six rebounds, two steals and an assist. The two combined for just one turnover, and that can be singled out as the biggest reasons Auburn won. When the Tigers desperately needed something on the offensive end in a low-scoring slop-fest, Wallace and Payne delivered.

Chubb and Dixon-Tatum deserve praise, as well, thanks to their strong play inside. They combined for six points, 12 rebounds, three blocks and one steal and finally played with a physical style that's been missing in recent games. The pair allowed Alabama center Moussa Gueye to control the paint in the first half, but after returning from the locker room, they stepped up and shut down the Tide's inside game.

Perhaps the best sign of the night was Auburn's improved perimeter defense. Yes, the Crimson Tide were having an off-night and missed some open looks, but the Tigers did a nice job of contesting shots, especially in the second half, and it resulted in a 2-of-19 performance from the SEC's third-best three-point-shooting team. Not allowing 'Bama to connect from behind the arc is what kept Auburn in the game early, and it allowed the Tigers to gain control late.

Wednesday night's game wasn't pretty, and an offensive output like that against just about any other conference opponent on any other night would result in a lopsided loss. But beggars can't be choosers, and Auburn ended a three-week losing skid with a victory over its biggest rival, holding 'Bama to its lowest point total in series history in the process. And that feels pretty damn good. There's still plenty of work to be done, but Auburn 49, Alabama 37 was definitely worth celebrating at Toomer's Corner.

Next up for Auburn is a road date at -- gulp -- Kentucky, a team that defeated the Tigers, 75-53, at Auburn Arena on Jan. 19. Tipoff from Rupp Arena is set for Saturday at 3 p.m. CT, and the game will be televised on the SEC Network.