Based on his recent social media activity and our wild speculation, yes.

The search for a new Auburn baseball coach is underway, and it will probably take some time to wrap up. We gave an extensive list of potential candidates shortly after John Pawlowski was fired, but one name that wasn't there, UCF head coach Terry Rooney, maybe should be added.

It could be pure coincidence, but Rooney recently followed a few Auburn-related accounts on Twitter, including the official College and Magnolia account and a couple of writers for this blog, beat writer Brandon Marcello, and a pay-site stalwart Phillip Marshall: 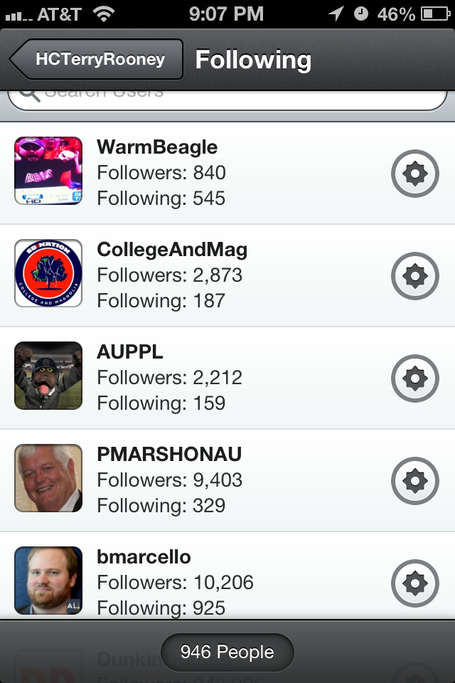 At the time of this post, those are the five most recent accounts Rooney has followed. It's unknown how serious a candidate he may be -- or even if he's a candidate at all -- but his timing for following a bunch of Auburn folks two days after Pawlowski's firing does raise an eyebrow.

Rooney has been head coach at Central Florida for five years, compiling a 168-124 record, and he led the Knights to regional appearances in 2011 and 2012. UCF fell off a bit this season, finishing the regular season at 29-30 and 13-11 in C-USA play, but the team was squarely in rebuilding mode, having lost several players to graduation and the MLB Draft.

In addition to his time as a head coach, Rooney has an nice pedigree as an assistant. He served as pitching coach under Paul Mainieri at Notre Dame from 2004-06 and made the move to LSU with Mainieri in 2007. During LSU's College World Series run in 2008, Rooney's staff ranked in the top 25 nationally in team ERA and walks per game, per his bio on the official UCF site.

Would Rooney be a good hire? He wouldn't be the home run name for which many are hoping, and for those wanting an offensive-minded coach, he's not that guy, either. However, he's young -- 39 years old -- has a proven track record as an assistant and has done a fine job of building the program at UCF. Plus, he's a first-rate recruiter. As LSU's recruiting coordinator, he assembled the country's top-ranked class in '08. His 2013 class at UCF was ranked 30th, and he brought top-20 classes to Orlando in the three previous cycles.

Rooney may or may not be a candidate, but according to some close to the program and in the know, two names that appear to be receiving serious interest are -- not much of a surprise here -- Samford head coach/former Auburn catcher Casey Dunn and Mississippi State pitching coach/former Auburn assistant Butch Thompson. The search is expected to take a while because of some candidates' postseason obligations, and Thompson fits into that group. His Bulldogs are set to host a regional this weekend.

"I'm very hopeful Auburn gives Casey (Dunn) a good look. I'd be thrilled to see him get the job"-Hal Baird on @977espn

"I have seen his Samford teams play..it's pretty obvious they have a great plan, beyond just playing hard"-Hal Baird on Casey Dunn on 97.7

There's a long way to go, but the search for a new baseball coach is beginning to take shape.