In this week's Undercover Barner, we accidentally write a love letter to Auburn's running backs and celebrate those little things that have made our 2-0 record that much sweeter.

I spent most of last week and this past weekend wondering what I was going to write about this week.

About 60 percent of that time was occupied by my worrying that Auburn wouldn't be able to beat Arkansas State. Another 35 percent was spent both celebrating and lamenting 'Bama's bye week*. The remaining 5 percent I blame on #summerofwestwing**.

Saturday's win sure was fun, though, wasn't it? There were plenty of tense moments, sure. But there came a point in the game (not named the end) when I became sure we were going to win. The outcome of the game didn't even depend on our opponent's final possession. I'd honestly forgotten what it felt like.

Auburn sits at 2-0, having beaten a hungry Wazzu team that went on to take down the Fighting Kiffins and an oddly clad Arkansas State team riding a win streak with more than a sizable chip on its collective shoulder and without a whole lot to lose.

It ain't the SEC yet, but I certainly won't turn my nose up at it. Baby steps.

It's an ugly reality, but Auburn went 3-9 last season. Three (3) wins. None came from the SEC. One was in overtime against a Sun Belt team thanks to a blocked field goal. The other two weren't even fun to watch. After just two games, the 2013 Tigers have already gotten 2/3 of the way to last season's win total before the 2012 Tigers even won a game.

I can read a box score. I know Auburn isn't back in championship contention. But Auburn has won two games it was supposed to win. That's more than can be said for last year's Tigers. Baby steps.

In news that surprises no one, I was pleasantly surprised with Auburn's defensive effort against the Red Wolves. They hit people. Hard. Despite giving up 422 yards of total offense (yikes), the Auburn D stood tall when it mattered and kept ASU out of the end zone. They gave up entirely too many third-and-long conversions, but stopped three ASU fourth down conversions. No one in his right mind thinks that kind of bend-don't-break performance is sustainable long-term, especially given the next few games on the schedule. The defense is about to get tested, and we will find out soon enough what our boys are made of. But there is something to be said for intangibles,*** especially when the program has the world's most urgent need for good news. Baby steps.

And I'd be absolutely remiss if I didn't mention Auburn's emerging 1-2-3 RB punch.

Tre Mason is as good as advertised. There isn't a lot I can say about him that hasn't been beaten like a dead horse on blogs, news sites, message boards, comment sections and water cooler chats. This may be our last season with him, and I hate it. Kid is a beast, and I'm glad he's wearing orange and blue.

I think Corey Grant is going to be special, and I'm not just saying that because he's an Opelika native. I don't remember who wrote the best thing I saw on Twitter on Saturday night, but it was something like this: "Corey Grant: He's like O-Mac but he'll fight you.*****" That's just it, isn't it? I will always have love in my heart for Squirrel, but he had trouble turning the corner, always seeming to shy away from taking the hit. Corey doesn't do that. Corey will run at you and dare you to stop him. Squirrel was always one block away from a house call. Corey is one stiffarm away, and I'm in love.

I've taken to calling Cameron Artis-Payne "Magna Carta Holy Grail," much to the delight of absolutely no one, and I yell it whenever he touches the ball. I hope I get as sick of it as everyone else already is because he is a workhorse. Artis-Payne is an old school Auburn RB. As much as it hurts to say it, it's been a while since I felt Auburn deserved its Running Back U nickname. That's starting to change, and it's really exciting to watch. Baby steps.

So where does that leave us, expectations-wise? To be honest, I have absolutely no idea. Apparently Auburn is favored by seven over Mississippi State. I'm guessing the home field advantage has a fair amount to do with that number. "We must protect this house" and whatnot. In a game I'd rather not relive, MSU destroyed Auburn in Starkville last season. It was our first indication that the wheels were coming off. I don't see another blow out, especially not in Jordan-Hare. Honestly, I think this game is winnable. This is the 2013 Tigers' first taste of the SEC. They're hungry. They're playing with fire. They want to win.

If you're heading to the Plains to see the Tigers take on the Bulldogs, never stop yelling. Fill Jordan-Hare with a cacophony of deafening roars the likes of which Dan Mullen has never imagined. Drown out those godforsaken cowbells, and set our defense on fire. Do this for me, please. I'll be in Tuscaloosa, hoping for a Texas A&M***** victory I just don't see coming to fruition.

*Alabama bye weeks are the best of times and the worst of times. While I can drive on Saturdays and actually hold civil conversations with people, I don't have a whole lot of blog fodder. So we're stuck with another super Auburn-centric piece without much laughable crimson influence. I guess that's the way the cookie crumbles. But let's be honest: I'd rather talk about us anyway. Our neighbor did put up this wreath, though, so expect a combination Auburn/LSU response-wreath soon: 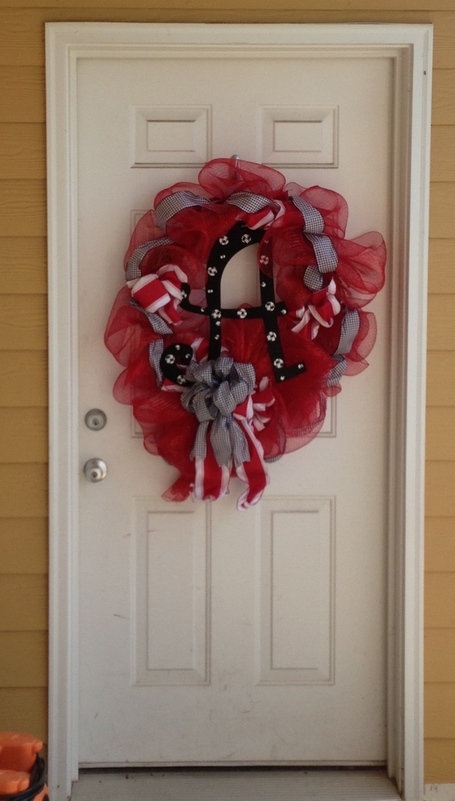 ***You have my permission to audibly groan, but this defense reminds me a little of the 2010 defense. Scrappy. Bends a good bit but doesn't break. It's really early, and I'm not saying they're going to carry us anywhere, but 2010's defense is a substantial improvement over 2012's.

****I really wish I could remember who said that or the exact quote. But I loved it.

*****Manziel is, by all appearances, a complete tool. However, my desire that he fail miserably this year in no way approaches the zeal with which I wish Alabama to lose at everything it ever attempts. No one ever said I was mature.